Lamar eliminates Houston Baptist to advance in the SLC Tournament

The Cardinals will face No. 3 seed Sam Houston Thursday at 8 p.m. from the Merrell Center. 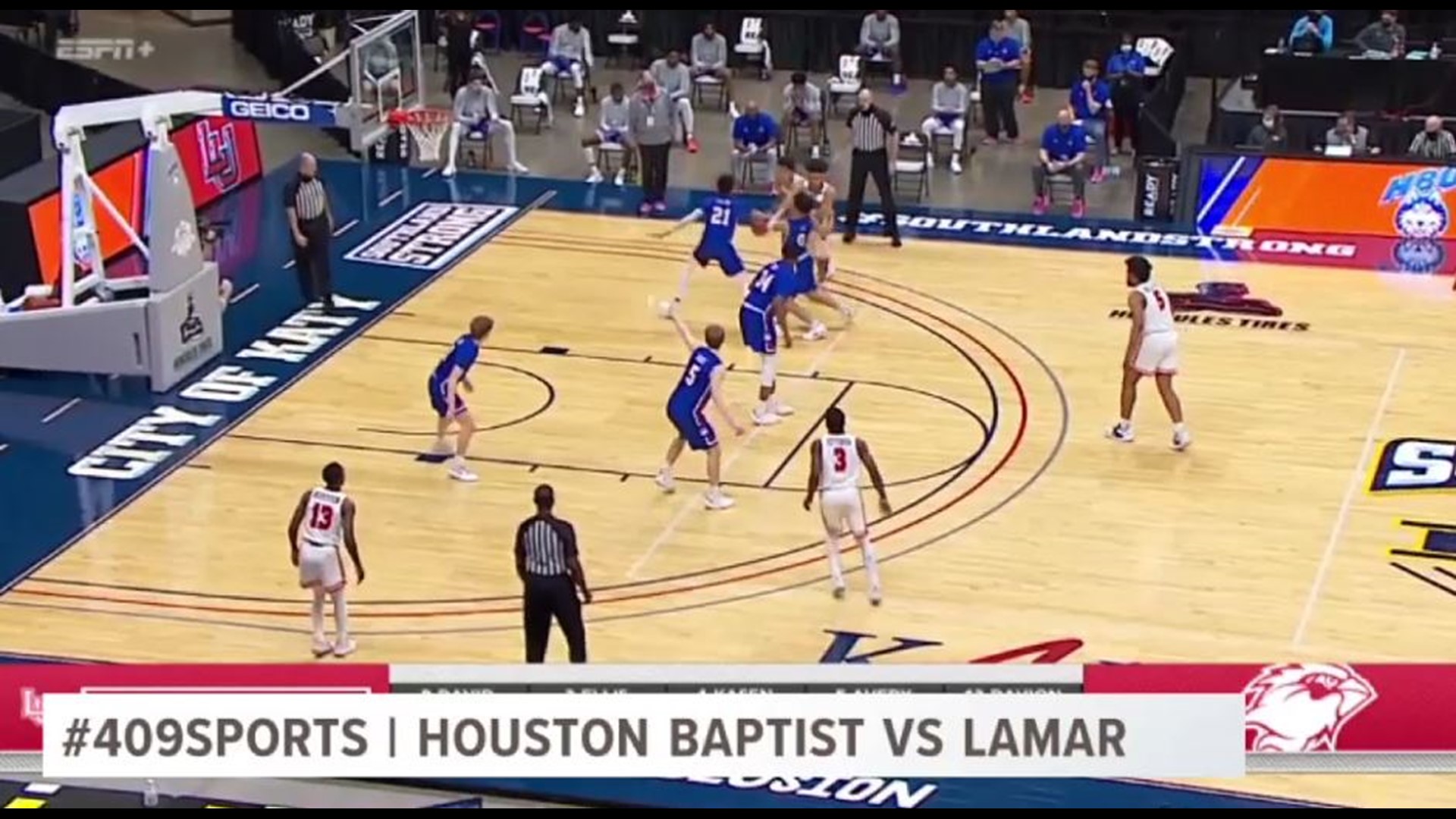 KATY, Texas — Lamar University opened the game on a 10-0 run and Houston Baptist never got closer than 10 points after as the Cardinals advance to the third round of the Southland Conference Championships with a 62-52 victory over 10th-seeded Houston Baptist. It marks the third consecutive season LU (9-17) has advanced in the postseason (last season LU won its opening-round game before the tournament was canceled due to the COVID-19 pandemic).

The Cardinals shot better than 47 percent (25-of-53), despite hitting just two three-point field goals. LU was led in scoring by 18 points from Davion Buster and 14 from Kasen Harrison.

Houston Baptist picked up the pace in the second half but ended the night 21-of-62 (.333) from the field. The Huskies also struggled from long range knocking down just 4-of-16 three-pointers. HBU held the advantage on the glass, 40-35.

"That is very a good basketball team we beat tonight," said LU head coach LU Tic Price. "We knew they were going to make run in the second half, but I'm also proud of my guys. They stayed calm and answered the challenge. Now we must turn our attention to Sam Houston."

The Cardinals jumped out of the gate hitting on all cylinders. Big Red opened the game on a 10-0 run and didn't allow HBU its first field goal until the 14:29 mark of the first half. LU connected on four of its first five attempts.

The Cardinals' defense was also locked in preventing HBU from converting on its first five attempts and just two of its first 11 (including an 0-of-3 start on threes). Big Red also forced the Huskies into 10 first-half miscues which led to a 12-0 advantage in fast break points.

After HBU hit a three to trim the lead down to nine points, the Cardinals responded with another run. Highlighted by a Harrison and-won, the Cardinals rattled off nine-straight points to push their lead to 13 points, 20-7. The Cardinals lead ballooned to as many as 18 on separate occasion before LU took a 35-21 lead into the locker room. The Cardinals closed the half with an Avery Sullivan basket at the buzzer – only because it hit four points on the rim and killed the final three seconds off the clock.

The Cardinals got the lead back to 17 points before Houston Baptist went on a 6-0 run in the second. Price called a timeout and his squad responded by scoring the next four points. Following a Pedro Castro dunk, the Huskies trimmed the deficit down to 10 but Big Red answered with a Buster jumper and forced a turnover. The Huskies quickly got the ball back but David Muoka thwarted a 3-on-2 fast break with a block.

The Huskies never put up a serious threat after that as LU advances for the third consecutive season. The Cardinals will face No. 3 seed Sam Houston Thursday at 8 p.m. from the Merrell Center. The game will be broadcast live on Newstalk 560 KLVI and streamed live on ESPN+.