At Smith Road, crews are building an overpass. That's where Thursday’s accident happened. 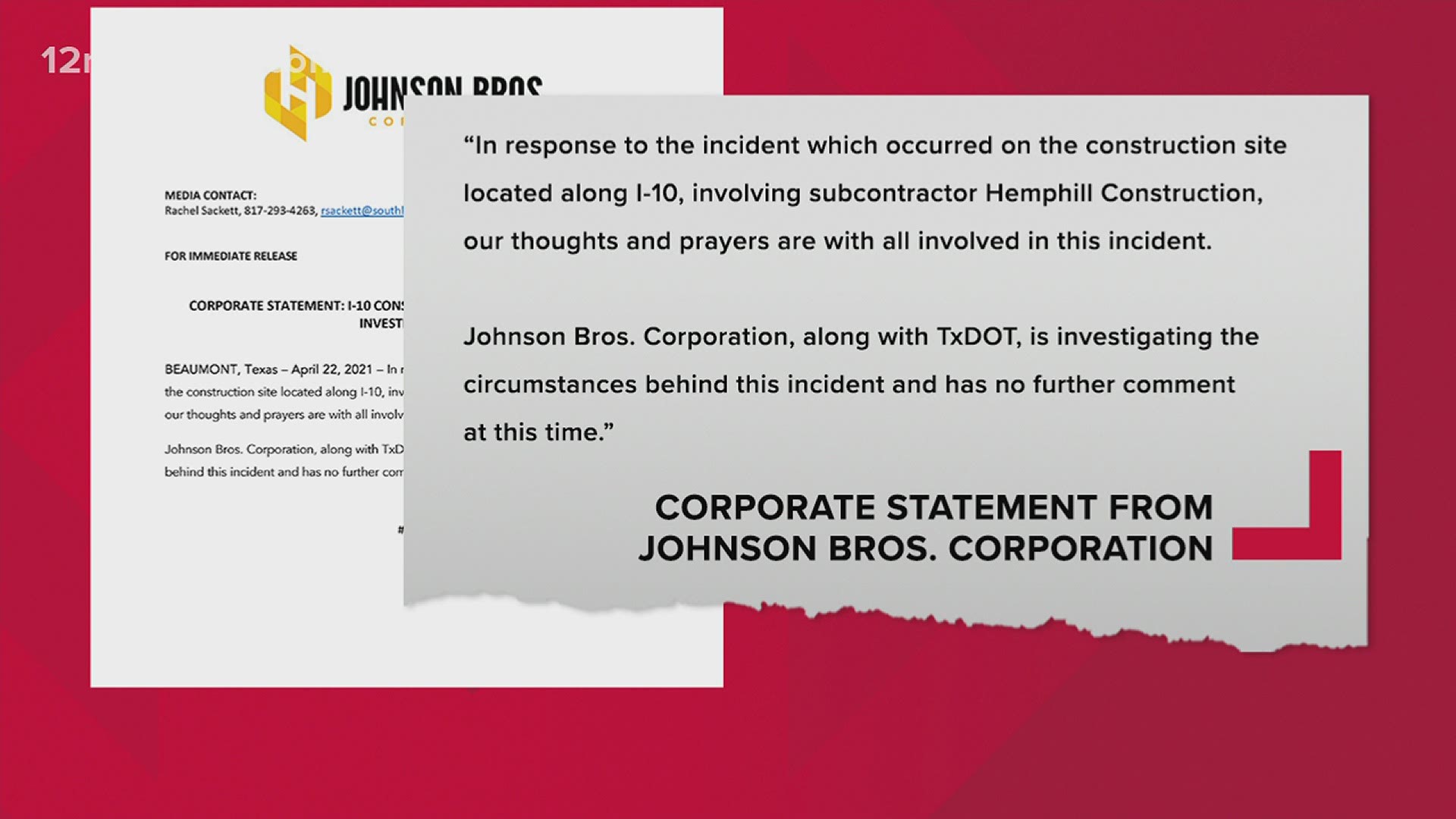 JEFFERSON COUNTY, Texas — The Texas Department of Transportation has canceled scheduled road closures on a stretch of Interstate 10 in Jefferson County for the next few days as an investigation into a fatal accident continues.

Two people were killed after a crane "malfunctioned" and fell onto a pickup truck on Interstate I-10 westbound near Smith Road, according to the Texas Department of Public Safety.

DPS is overseeing the investigation, but because it involves fatalities, Occupational Safety and Health Administration and federal agencies are also involved. Their teams came to the scene Thursday night.

RELATED: 2 dead after crane 'malfunctions' on I-10 near Smith Road in Jefferson Co.

A TxDOT spokesperson tells 12News this involves the Johnson Brothers Corporation. They're the contractor on the I-10 widening project in Jefferson County. The project started in February 2019.

Johnson Brothers is widening the interstate from two to three lanes in each direction between FM 365 and Walden Road, according to the state. The work at Smith Road includes a new overpass.

BREAKING | Two people killed on I-10 in #Beaumont in a freak accident. A construction crane appears to have came apart and fallen on their truck. The westbound lanes remain closed at Smith Road. Updates: https://t.co/wiDFlZ9ieI... #texas #traffic #craneaccident #12NewsNow pic.twitter.com/8DlBfVWuu5

Johnson Brothers is a subsidiary of a huge company based in the Dallas area called Southland Holdings. They build roads and infrastructure from coast to coast.

On their website, they talk about their roots, building water and wastewater pipelines here in Texas, saying in part that they've "...Grown into one of the largest construction companies in North America."

12News investigates reached their corporate spokesperson Thursday. She said, in part, that the company's "Thoughts and prayers are with everyone involved in this." She also references a sub-contractor, Hemphill Construction. 12News has been unable to reach them.

The Southland Holdings spokesperson says, "Johnson Bros. Corporation, along with TxDOT, is investigating the circumstances behind this incident and has no further comment at this time."