The Cardinals will return to the Montagne Center on Saturday, January 30 when they welcome rival McNeese in the first edition of the Battle of the Border in the 2020 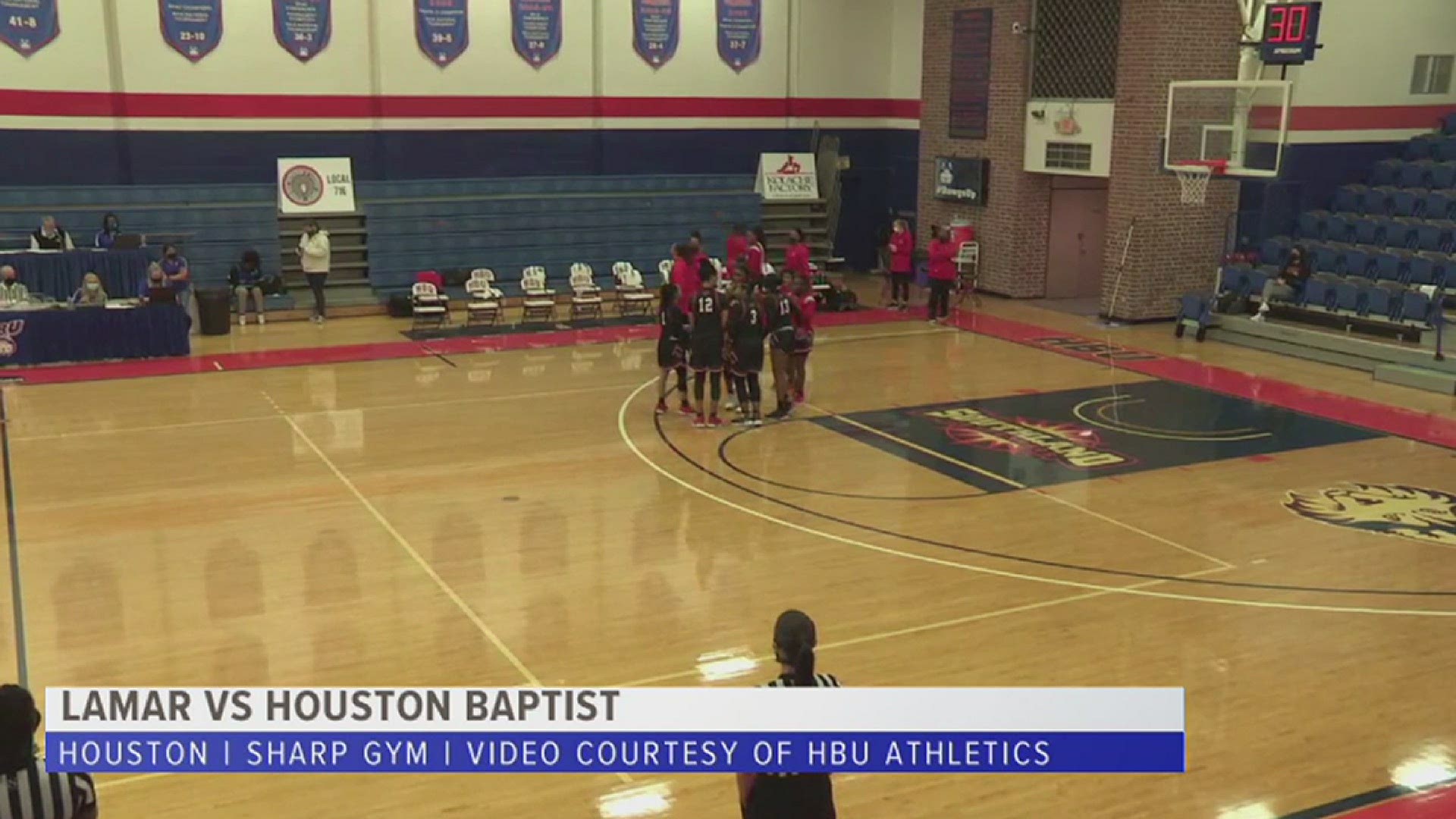 HOUSTON, Texas — Lead by a career-high 18 points from freshman Sabria Dean, the Cardinals went on the road and secured the win over the Houston Baptist Huskies, 66-61, on Wednesday night at Sharp Gym.

"Tonight was a total team effort defensively," said head coach Aqua Franklin. "Sabria and Micaela both carried us offensively. Both are coming into their own. We will enjoy this win tonight and get ready for McNeese on Saturday."

The Huskies used a 5-0 run to begin the game before the Cardinals turned the tide and went on the bring the score to 7-6 in favor of HBU with 5:23 left in the first. HBU was able to answer on a three-pointer by N'Denasija Collins to push the Husky lead to four. The Cardinals and the Huskies traded baskets throughout the first period. Lamar saw its first lead of the contest with 22 seconds left as junior Micaela Wilson knocked down two free throws to make it 20-18. The Cardinals shot just 35 percent in the first frame while HBU knocked down only 38 percent of their first period shots.

The second period began in a back and forth affair between the programs before the Cards were able to take a 26-23 lead on a Kayla Mitchell jumper at the 7:29 mark. The Huskies went on to even things up at the 5:51 mark on a free throw by Abbey Sutherland before senior Jadyn Pimentel was able to connect to give Lamar the lead back. HBU came out of the second period media and was able to regain control of the lead, 30-29. With the final seconds winding down, sophomore Kayla Mitchell was able to make a crucial steal and fast break layup to give the Cardinals a 31-30 lead going into halftime.

Coming out of the break, Lamar was able to pull away before Houston Baptist was able to use a 7-0 to take the lead with 6:22 left in the period. Freshman Sabria Dean was able to halt the Husky run with a driving layup that evened the score before both teams traded shots. Dean was fouled out the 5:37 mark and sunk both free throws to give Lamar the lead, 39-37, going into the third period media. Coming out of the media timeout, Lamar was able to use an 10-0 run to create some breathing room before HBU's Timia Jefferson knocked down two free throws at the 2:37 mark. The Huskies were able to close out the third period on a 6-0 run to close the Lamar lead to 45-43.

The fourth period came out to be another back and forth battle with the Huskies' pulling within one at the 5:54 mark before Wilson got the Cards back to a three point lead. The Cardinals were able to out-shoot HBU coming down the stretch and were able to hold onto the lead, 66-61, for their third SLC victory of the season. Lamar was able to hold Houston Baptist to just 36 percent from the field, as they averaged 41 percent on the year coming into the contest. The Cardinals shot 42 percent on the night, while they came into the

UP NEXT: The Cardinals will return to the Montagne Center on Saturday, January 30 when they welcome rival McNeese in the first edition of the Battle of the Border in the 2020-21 season. Tipoff is slated for 2:00 p.m. CT and will be broadcasted on ESPN+. 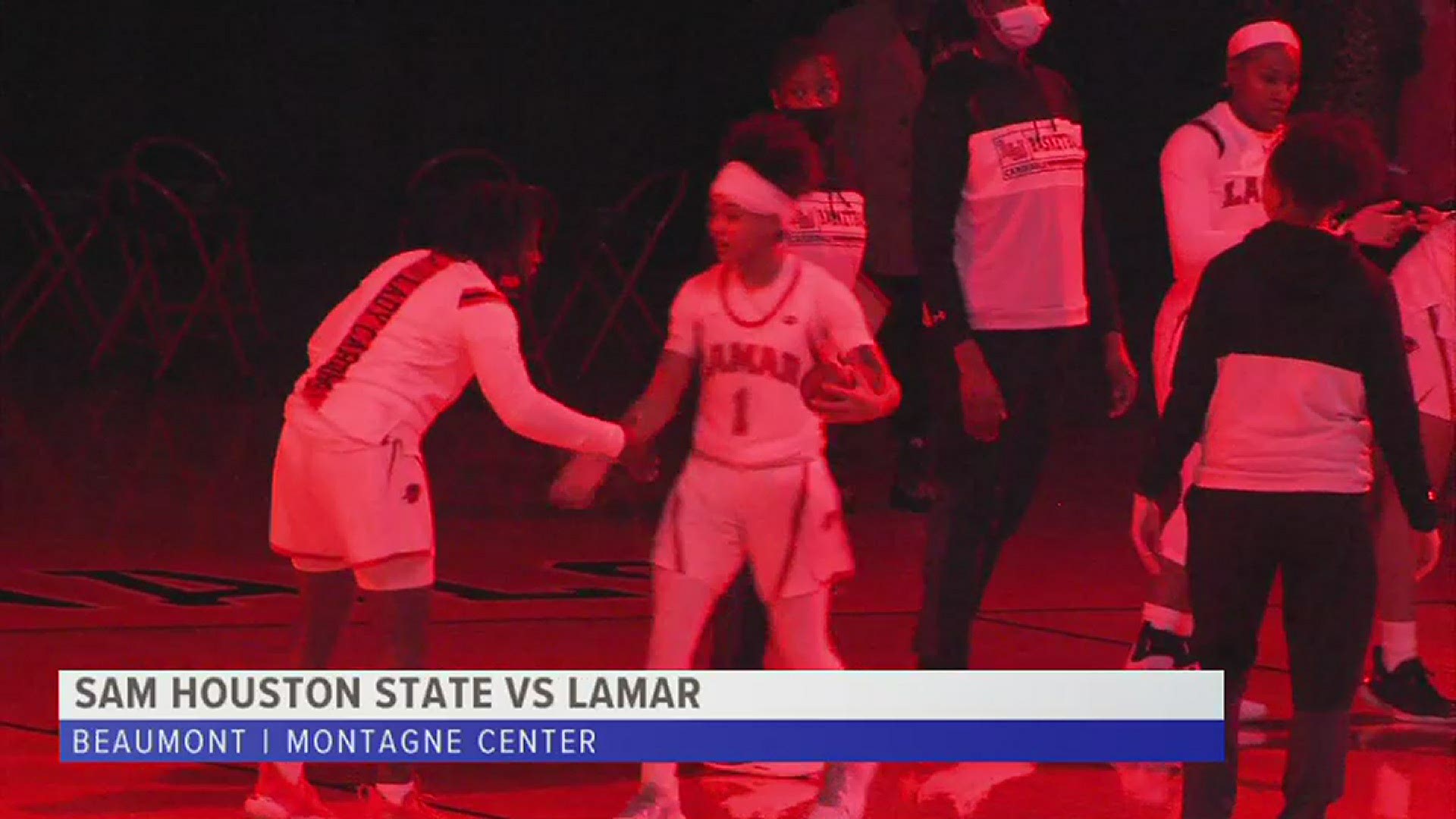