Texas, which has up to 38 electoral votes, has been a reliable win for Republicans for the past 10 presidential elections. 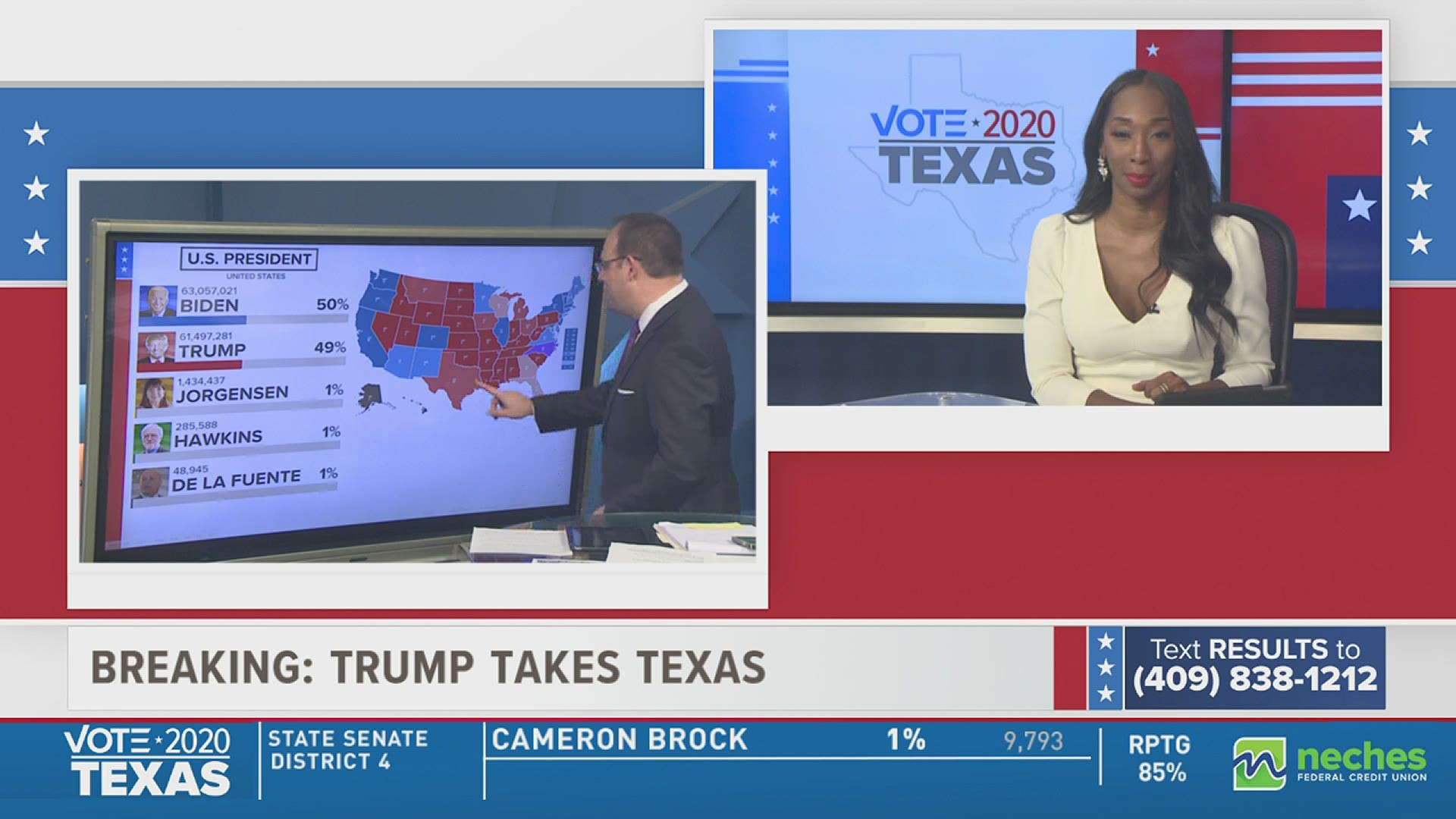 HOUSTON — Closer races produced the same results Tuesday in Texas as President Donald Trump and Sen. John Cornyn both won their races in America's biggest red state and Democrats who had hoped to finally break through faced the prospect of having little to show for a record-turnout election.

Cornyn was a clear winner within an hour of polls closing in Texas, and Democrats' expensive and optimistic run at claiming a majority in the state House for the first time in 20 years was fading.

“Texas DID stay Red," Republican Gov. Greg Abbott tweeted, even as many state House races had yet to be called.

More than 10.7 million people had voted in Texas — a record — but the surge in turnout produced no surprises. Democrats spent millions of dollars in a bid to flip a half-dozen congressional seats in Texas but lost at least one of their top targets outside Houston and saw their candidates trailing in others.

RELATED: Presidential Election 2020: Live results from across the US

Trump was up on Biden by more than 5 points with some votes still outstanding, a margin that would be closest presidential race in Texas in decades if it holds. Cornyn, meanwhile, was potentially headed to a double-digit win over Democratic challenger MJ Hegar.

The results up and down the ballot gutted Democrats who believed, at last, they were the brink of winning again in Texas after huge gains in 2018 propelled by Beto O'Rourke's narrow loss to U.S. Sen. Ted Cruz.

“I think our friends on the other side had so much money, they had more money than they knew what to do with, so they ended up in a long shot in places like Texas,” said Cornyn, who received a call from Hegar conceding race less than a half hour after polls closed.

Trump had expressed confidence about Texas — which Republicans have carried in every presidential race since 1976 — but polls down the stretch suggested that Biden still had a chance as Democrats saw unusual opportunity up and down the ballot in a state where they’ve been shut out for a generation.

Few problems were reported at polling places as scores of voters continued turning out. In Harris County, a crucial battleground home to more nearly 5 million people, election officials reported that at least another 190,000 more votes had been cast.

James Price, a 55-year-old forklift driver from the suburb of Tomball, voted for Biden and believed that Democrats were on the brink of making a breakthrough in Texas after years of irrelevance.

“But it don’t matter whether it turns blue or red, green, purple. If these elected officials ... cannot work together, this is not going to work. It don’t matter who flips what,” Price said.

Democrats, shut out of power in the Texas Capitol for a generation, had believed they were within reach of seizing the majority in the state House chamber for the first time in nearly 20 years — an outcome that would mark a new era in what has been America’s foremost factory of conservative legislation.

Voters in Texas made their pick for president while holding negative views about the country’s direction, according to an expansive AP survey of the American electorate. AP VoteCast found that nearly three-fifths of Texas voters said the U.S. is headed in the wrong direction and about two-fifths said it is on the right track.

In Dallas, retired antiques dealer Cheryl North, 71, said she voted for Trump and every other Republican on the ballot.

“They didn’t have a place on the ballot where you could vote straight Republican but I just went through one at a time,” she said.

She said her biggest motivation to vote was “fear of my country becoming socialist and (I) just didn’t want that to happen.”

The avalanche of votes reflected high enthusiasm and signs that Texas, where Republicans have coasted in lopsided elections for decades, was rapidly transforming into a battleground.

The heavily Latino border lagged in early voting turnout behind other parts of Texas, and Texas Democratic Party chairman Gilberto Hinojosa said his party’s decision to not knock on doors for much of the campaign because of COVID-19 worries hurt outreach efforts. Contacting voters by phone, Hinojosa said, is “only so effective.”

Biden was faring far worse along the Texas border than Hillary Clinton did four years ago. For Democrats, the disappointing results along the heavily Latino border came just days after Democratic vice presidential nominee Kamala Harris visited the region in the race's final days.

The road to Election Day in Texas was littered with legal battles over voting access in the middle of a pandemic. Whereas the vast majority of states are allowing widespread mail-in voting because of coronavirus fears, Texas is only one of five that refused, choosing instead to expand early voting by one week.

On Monday, a federal judge rejected a last-ditch effort by GOP activists to toss out nearly 127,000 votes in Houston that were cast at drive-in polling centers. Later Monday night, a federal appeals court panel denied the group’s request to halt drive-thru voting in Harris County on Election Day.

Polls suggested a closer-than-normal race in Texas — which Trump won by 9 points in 2016 — although the president gave little indication of outward concern. He didn’t campaign in Texas down the stretch, focusing instead on tossup battles in Florida, Arizona and Pennsylvania.

Biden did not campaign in Texas either — frustrating Texas Democrats who pleaded with the former vice president to make a bigger push with his chances here looking remarkably viable. He instead ran a relatively small campaign in Texas, and left the heavy lifting to millions of dollars that Democrats poured into down-ballot races to oust vulnerable GOP state lawmakers and members of Congress.