The aid package will now work its way through congressional committees with the goal of finalizing additional relief, including a third stimulus check, by mid-March. 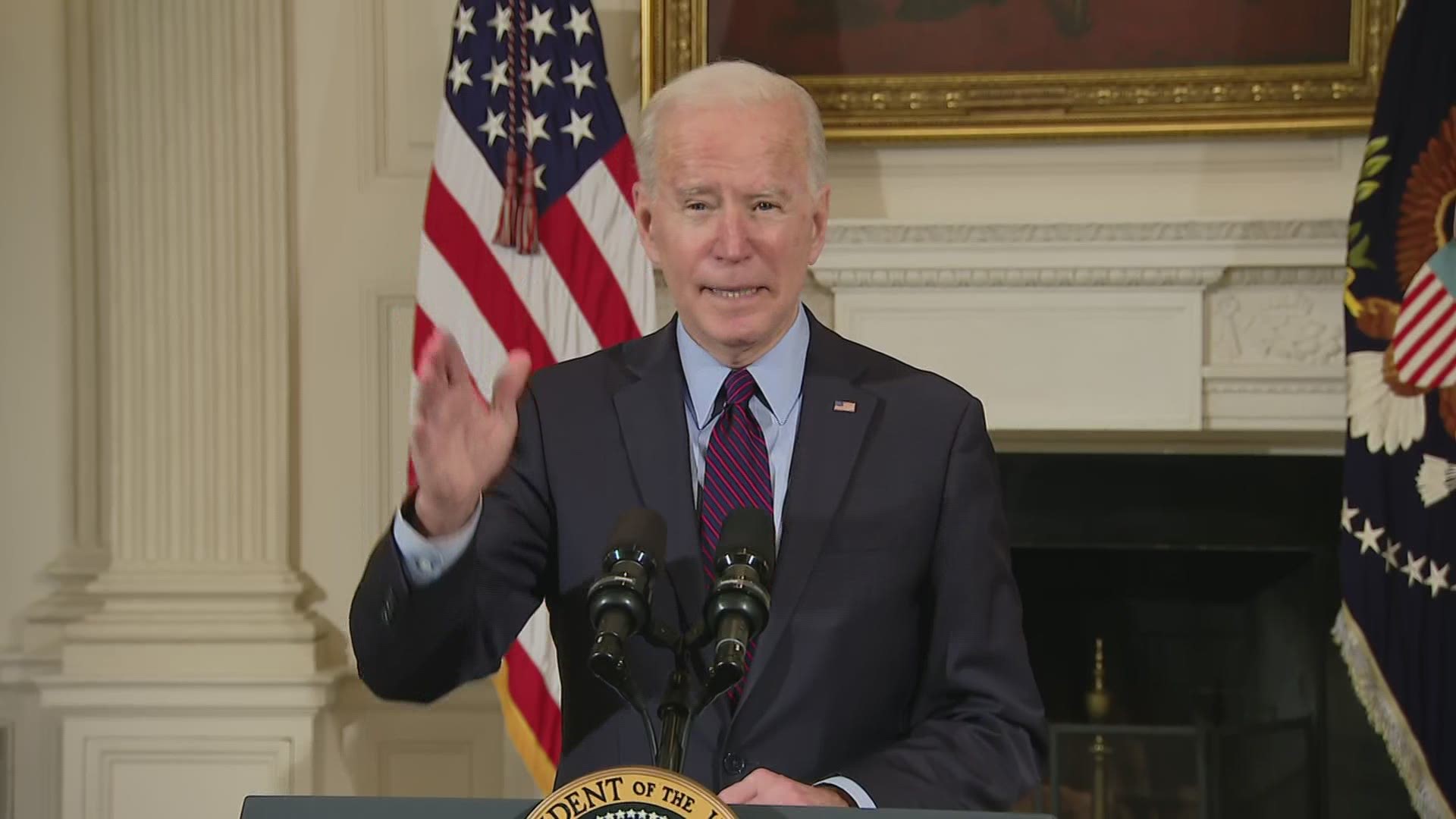 WASHINGTON — President Joe Biden laid out the case Friday for moving fast and without Republicans, if necessary, to pass $1.9 trillion in coronavirus relief, armed with new signs of economic strain brought on by the continuing pandemic.

The stakes for the country and economy were amplified on Friday morning, shortly after Senate Democrats cast a decisive vote to muscle the plan through the chamber without Republican support, a step toward final approval next month. January’s jobs report showed that hiring had stalled to a pace that could hinder a return to full employment for several years—with 406,000 people choosing to leave the labor force as deaths from the pandemic surged.

“A lot of folks are losing hope,” Biden said in a speech at the White House. “I believe the American people are looking right now to their government for help, to do our job, to not let them down. So I’m going to act. I’m going to act fast. I’d like to be doing it with the support of Republicans ... they’re just not willing to go as far as I think we have to go.”

The speech solidified a shift from a president who entered the White House pledging bipartisanship and met on Monday with 10 Republican senators who proposed a slimmed-down $618 billion alternative. But Biden concluded in his Friday speech that aid at that level would only prolong the economic pain.

His remarks came several hours after the Senate approved a budgetary measure that would let Democrats pass the plan without Republicans. Vice President Kamala Harris cast the tie-breaking vote in the Senate, her first.

Senate Democrats applauded after Harris announced the 51-50 vote at around 5:30 a.m. The action came after a grueling all-night session, where senators voted on amendments that could define the contours of the eventual COVID-19 aid bill.

Adopted, 51-50: S.Con.Res.5, Sanders Budget Resolution, as amended, with @VP voting in the affirmative.

Following Senate approval, the House passed the measure 219-209 on Friday afternoon, also without a Republican vote.

The coronavirus aid package can now work its way through congressional committees with the goal of finalizing additional relief by mid-March, when extra unemployment assistance and other pandemic aid expires. It’s an aggressive timeline that will test the ability of the new administration and Congress to deliver.

“We have been focused like a laser on getting this done,” House Speaker Nancy Pelosi said after leading Democrats in the House met with Biden Friday. “We hope to be able to put vaccines in peoples arms, money in people’s pockets, children safely in schools and workers in their jobs. That’s what we are doing now.”

“At that rate, it’s going to take 10 years until we hit full employment,” Biden said at an Oval Office meeting with House Democrats earlier Friday. “That’s not hyperbole. That’s a fact.”

The unemployment rate fell to 6.3% from 6.7%, but there was a decline in the number of people who were either working or looking for a job in a sign that some people are dropping out of the labor force. The U.S. economy is 9.9 million jobs shy of its pre-pandemic level.

Biden, who has been meeting with lawmakers in recent days to discuss the package, welcomed the leaders of House committees who will be assembling the bill under the budget process known as “reconciliation.” Money for vaccine distributions, direct payments to households, school reopenings and business aid are at stake.

The size of the package has been a concern for several Republican lawmakers and some economists. Larry Summers, a former treasury secretary during the Clinton administration, said in a column for The Washington Post that the $1.9 trillion package was three times larger than the projected economic shortfall. A separate analysis by the Penn Wharton Budget Model found the plan would do little to boost growth relative to its size.

The marathon Senate session brought test votes on several Democratic priorities, including a $15 minimum wage. The Senate by voice vote adopted an amendment from Sen. Joni Ernst, R-Iowa, opposed to raising the wage during the pandemic. Ernst said a wage hike at this time would be “devastating” for small businesses.

The Senate also passed an amendment 99-1 that would prevent the $1,400 in direct checks in Biden’s proposal from going to “upper-income taxpayers.” But the measure, led by Sens. Susan Collins, R-Maine, and Joe Manchin, D-West Virginia, is ultimately symbolic and nonbinding and does not specify at what level a person qualifies as upper income.

And while Biden seemed willing to break with Republicans in his speech, White House press secretary Jen Psaki told reporters afterward that the reconciliation process approved by the Senate still allows for bipartisanship.

“The process enables for time for negotiations through committee work,” Psaki said. “We certainly are hopeful that there will be opportunities for amendments from Republicans, amendments from others across the board to be a part of this process moving forward.”

RELATED: US rushes to catch up in the race to detect mutant viruses

RELATED: Biden signals that US will refocus on diplomacy abroad

RELATED: US unemployment claims fall to 779,000 but job cuts grind on