Union officials said the company could have ended the lockout at any time and returned workers back to their positions. 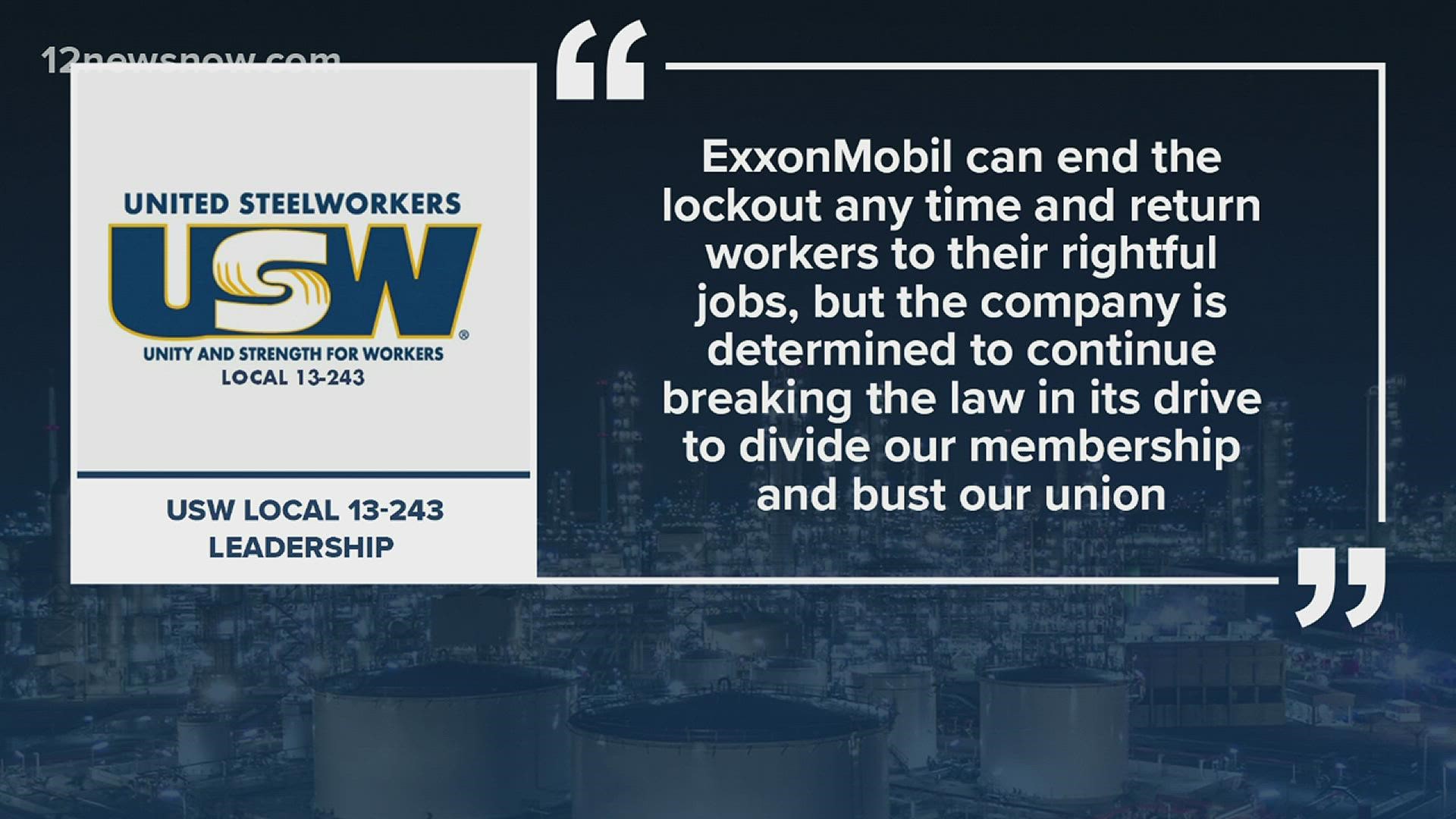 The union also accuses Exxon of "illegal actions," saying that it could taint the results of a decertification election.

On Thursday, October 7,  Exxon issued a release stating the company will welcome back every employee even if the union decertifies.

On Friday, October 8, the union issued a release taking aim at the oil-company. The USW said Exxon would rather operate without a union than negotiate with theirs.

Union officials claim that ExxonMobil has been "deliberately misleading people" with confusing statements regarding the union, the negotiations, and Exxon’s “spiteful lockout of union members from their jobs,” since the bargaining started.

According to the release, the Union believes Exxon wants to divide the USW membership. Union officials said the company could have ended the lockout at any time and returned workers back to their positions.

USW leaders said their membership was tested before, but their solidarity always prevailed.

Union officials said they will continue to hold ExxonMobil accountable and urge management to bargain in good faith for the earned and deserved fair contract for essential workers in Beaumont.

On Wednesday, October 6, an individual requested a vote to decertify the United Steelworkers union at ExxonMobil.

The union was notified that the individual had gotten enough signatures to request a decertification vote from the National Labor Relations Board.

If the election is held and the majority of the votes cast are not in favor of union representation then the union will be decertified.

Shortly before the decertification request, ExxonMobil and the USW union met for the 50th time on Monday, September 27, where the company presented the first new offer since January 2021.

The amended offer still contained a six-year term with the additions of the four Union-requested changes listed below:

This new offer will remain available until Monday, Nov. 1. After that date, some of the offer’s provisions will be subject to change or expire.

In a previous statement to 12News, union members said the never expected the lockout, which in early May of 2021, to last this long.

The USW contends that ExxonMobil committed serious unfair labor practices during bargaining and while implementing its lockout and that the company's illegal actions will taint the results of a representation election. Simply put, management would rather operate without a union than negotiate with ours.

Since bargaining started, ExxonMobil deliberately has been misleading people with confusing statements regarding our union, our negotiations and the company's spiteful lockout of union members from their jobs at the refinery and blending/packaging plant.

ExxonMobil can end the lockout any time and return workers to their rightful jobs, but the company is determined to continue breaking the law in its drive to divide our membership and bust our union.

Our membership has been tested before, and our solidarity has prevailed in every case. We will continue to hold ExxonMobil accountable and urge management to bargain in good faith for the fair contract essential workers in Beaumont have earned and deserve.