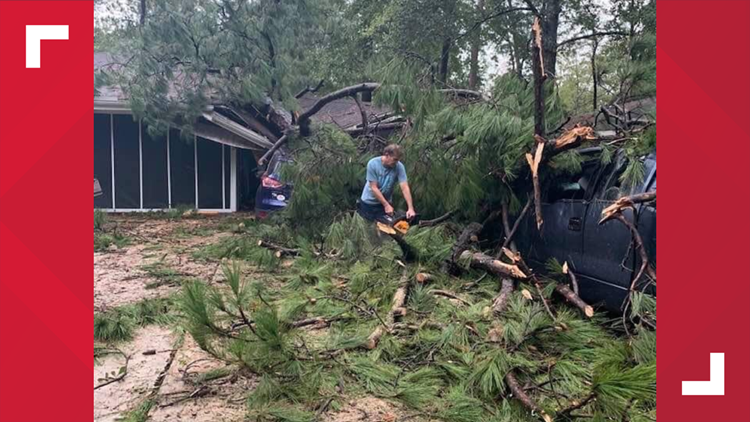 Photo by: Terry Poche via WWL-TV

'Worst-case scenario' | Olga catches many in Louisiana off guard

BEAUMONT, Texas — Tropical Storm Olga was only a tropical storm for a few hours, but it was strong enough to cause widespread damage and knock power out to more than 100,000 homes and businesses.

The unexpected strength of winds from Olga knocked out power to more than 92,000 Entergy customers and more than 40,000 Cleco customers Saturday.

Power began slowly return Saturday afternoon. But some homes may not have power restored until Sunday.

"That's the worst-case scenario for most customers," Lee Sabatini of Entergy Louisiand told WWL-TV Saturday. "People can expect their power to be restored sooner than 6 p.m. in most cases."

Majority of the outages were in Tangipahoa Parish.

The timing not ideal for LSU fans who are without power for their top 10 matchup with Auburn in Baton Rouge.

There were two power outages at the airport Saturday causing multiple flights to be cancelled and delayed. Security lines snaked through the airport for most of the morning.

RELATED: Texas to get $4B to help prevent future flooding

RELATED: How to keep mosquitoes at bay after Imelda floodwaters bring wave of pesky bugs