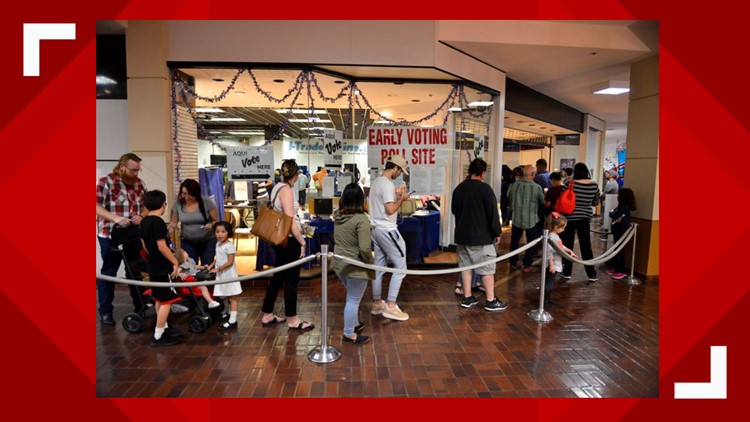 Photo by: Robin Jerstad
A long line of voters wait to cast their ballots at the Wonderland of the Americas Mall in San Antonio late Friday afternoon, Nov. 2, the last day of early voting.

U.S. District Judge Fred Biery called the review "ham-handed" and ordered counties not to remove any voters from the rolls without his approval and "a conclusive showing that the person is ineligible to vote."
Author: EMMA PLATOFF / The Texas Tribune
Published: 1:41 PM CST February 27, 2019
Updated: 6:33 PM CST February 27, 2019

AUSTIN, Texas — In a major victory for voting rights groups, a federal judge has ordered that no Texas county should purge suspected noncitizen voters from the rolls or issue letters demanding that they prove their citizenship “without prior approval of the Court with a conclusive showing that the person is ineligible to vote.”

The Wednesday order from U.S. District Judge Fred Biery comes a month after the Texas secretary of state flagged nearly 100,000 voters for citizenship review — and a flurry of civil rights groups filed three lawsuits to block state and county officials from purging voters based on what has proven a deeply flawed set of data.

Biery ordered that as the litigation continues, counties can “continue to find out if in fact someone is registered who is not a citizen” — some local officials have proposed comparing lists of flagged voters with names of individuals made citizens at recent naturalization ceremonies, for example — but may not communicate directly with any particular individual on the list. Reaching out to a voter to demand proof of citizenship starts the clock on a process that can lead to that voter being purged from the rolls.

The approximately 98,000 voters on the state’s original list were registered voters who had, at some point in recent years, identified themselves as noncitizens to the Department of Public Safety while receiving or renewing their driver’s licenses. But tens of thousands of those individuals, it has come out in recent weeks, were naturalized before registering to vote, making casting a ballot legal. Drivers need to update their licenses every six years, and naturalized citizens are not required to update DPS when their legal status changes.

The number of voters who turn out to be naturalized citizens on the rolls lawfully is expected to grow as efforts to review the list proceed. But many counties, after receiving the Jan. 25 advisory from state election officials, immediately began sending notices to flagged voters. The state has since backed off from its initial advisory, arguing it was up to the counties to decide whether to send notices of examination. Local officials counter that if the state didn’t want them to begin the process of purging voters, state officials shouldn’t have so publicly blasted out the list — complete with a form letter demanding proof of citizenship to mail to flagged voters and public statements issuing a “VOTER FRAUD ALERT.”

“Almost immediately upon sending the list, the government had an ‘oops’ moment, realizing that 25,000 names should not have been included,” Biery wrote in reference to the naturalized citizens erroneously flagged for review. “It appears this is a solution looking for a problem.”

The entire initial list — including those 25,000 voters the state acknowledges were wrongfully flagged — was referred to the Texas Attorney General’s Office for criminal investigation and potential prosecution on Jan. 25, before counties had the opportunity to do any fact-finding. The attorney general’s office has given contradictory indications of whether it has initiated any such investigations.

Since the list’s rollout, just over 80 individuals have voluntarily taken themselves off the rolls, including 45 who said they should be removed because they are not citizens, according to testimony in Biery’s courtroom Monday. Ten of those 45 individuals had voting histories, state officials said.

Biery’s order directly addresses the more than a dozen counties that are named defendants in the flurry of lawsuits. It also directs the state to inform Texas’ other 200-plus counties that they may not purge voters or demand proof of citizenship without his approval. Sam Taylor, a spokesman for the secretary of state, said Wednesday afternoon that the office is preparing a communication to Texas counties in light of the ruling.

Last week, eight counties agreed voluntarily to halt their efforts, and on Monday, Biery extended that order to a total of 15 counties.

"This is an extremely important ruling to help prevent eligible voters in Texas from getting kicked off the voter rolls," said Thomas Buser-Clancy, a staff attorney for the American Civil Liberties Union of Texas, one of the groups suing the state. "Today, the court recognized what we have been saying all along: This voter purge discriminates against naturalized citizens."

Much like his remarks in court this week, Biery’s order contained harsh words for the state’s bungled attempt to review its rolls, and good omens for the civil rights groups aiming to prove that Texas has treated two groups of people, native-born citizens and naturalized citizens, differently.

“Notwithstanding good intentions, the road to a solution was inherently paved with flawed results, meaning perfectly legal naturalized Americans were burdened with what the Court finds to be ham-handed and threatening correspondence from the state which did not politely ask for information but rather exemplifies the power of government to strike fear and anxiety and to intimidate the least powerful among us,” Biery wrote. “No native born Americans were subjected to such treatment.”

Biery also wrote — as civil rights groups and voting experts have long maintained — that “there is no widespread voter fraud” in Texas and that an attempt to root out noncitizens on the voter roll forces officials to figure out “how to ferret the infinitesimal needles out of the haystack.”

State officials have said that moving forward, they plan to watch for noncitizens who are registered to vote by comparing voter rolls with more recent lists of individuals who present proof of legal status, but not citizenship, at DPS. Biery’s Wednesday order allows that process to proceed but advises that officials may not purge those voters or demand proof of citizenship without approval from him.

In court Monday, Keith Ingram, elections director for the Texas secretary of state, said that in the last month, 22,000 Texans have shown proof of lawful presence but not citizenship at DPS, and an initial review found 1,000 matches on the voter rolls. Those names have not been referred to the Texas Attorney General’s Office for prosecution or to county officials Ingram said.

In a statement, Texas Attorney General Ken Paxton said the court was "improperly assuming control over key aspects of the State's obligation under federal and state law to maintain the integrity of its voter rolls."