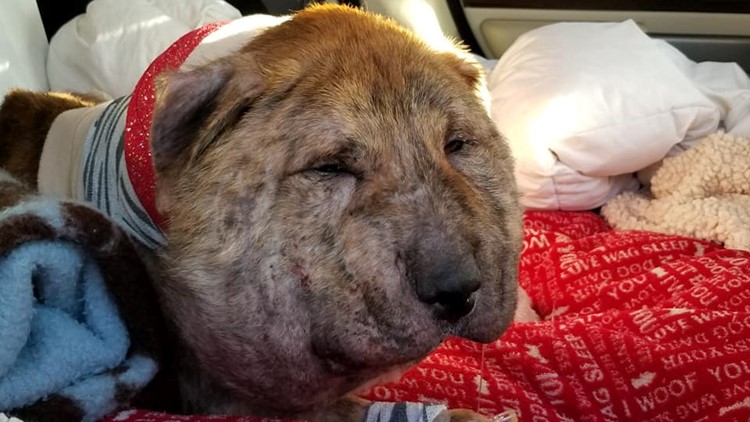 Gus had been shot at least 25 times with a pellet gun and a shoestring was wrapped so tightly around his neck that it became embedded and caused his head to swell. (K911 Rescue)

The dog had been shot several times with a pellet gun and he had a shoestring so tightly wrapped around his neck, it became embedded in his skin.
Author: Michelle Homer, Levi Ismail
Published: 2:38 PM CDT August 31, 2018
Updated: 12:50 AM CDT September 1, 2018

HOUSTON – A brutally battered dog that won the hearts of many Houstonians is undergoing surgery at Texas A&M's small animal hospital.

Animal rescuers found Gus Wednesday night at a southeast Houston apartment complex. He had a severely swollen head and an open tissue wound on his neck.

Gus's head swelled because a shoestring had been wrapped so tightly around his neck, it became embedded. (K911 Rescue)

The rescuers took Gus to the Vergi animal hospital in Houston where x-rays show at least 25 pellet wounds, with some pellets still lodged in him.

They made the decision to transfer Gus to A&M where he can be treated by soft tissue specialists.

Surgeons at A&M began removing scar tissue from his neck Friday afternoon. It's a tricky surgery because the scar tissue is so close to his carotid artery and jugular vein.

After the surgery, Gus will face a long road ahead but, despite his forelorn look, he seems to have an amazing will to live.

Neighbors at the apartment complex said they'd seen him walking around with a swollen head for more than a year. It's not clear why no one tried to get help.

RELATED: Meet the rescuers who saved Gus from certain death

Anna Barbosa with K911 Rescue agreed to take custody of Gus. She said these kinds of cases happen far too often.

“For however long, nobody did anything for him and he got to that condition,” Barbosa said.

Simply spreading the word brought Gus out of the shadows and into a place he could eventually call home.

ALSO READ: How you can help this poor dog

Donations can be made on their website or you can call VERGI, the animal hospital, and make donations directly for Gus. Their number is 713-932-9589.