GOP oppose Biden's American Jobs Plan as big taxes, big spending and big government. The White House says Biden is open to their ideas, but he is also pushing ahead. 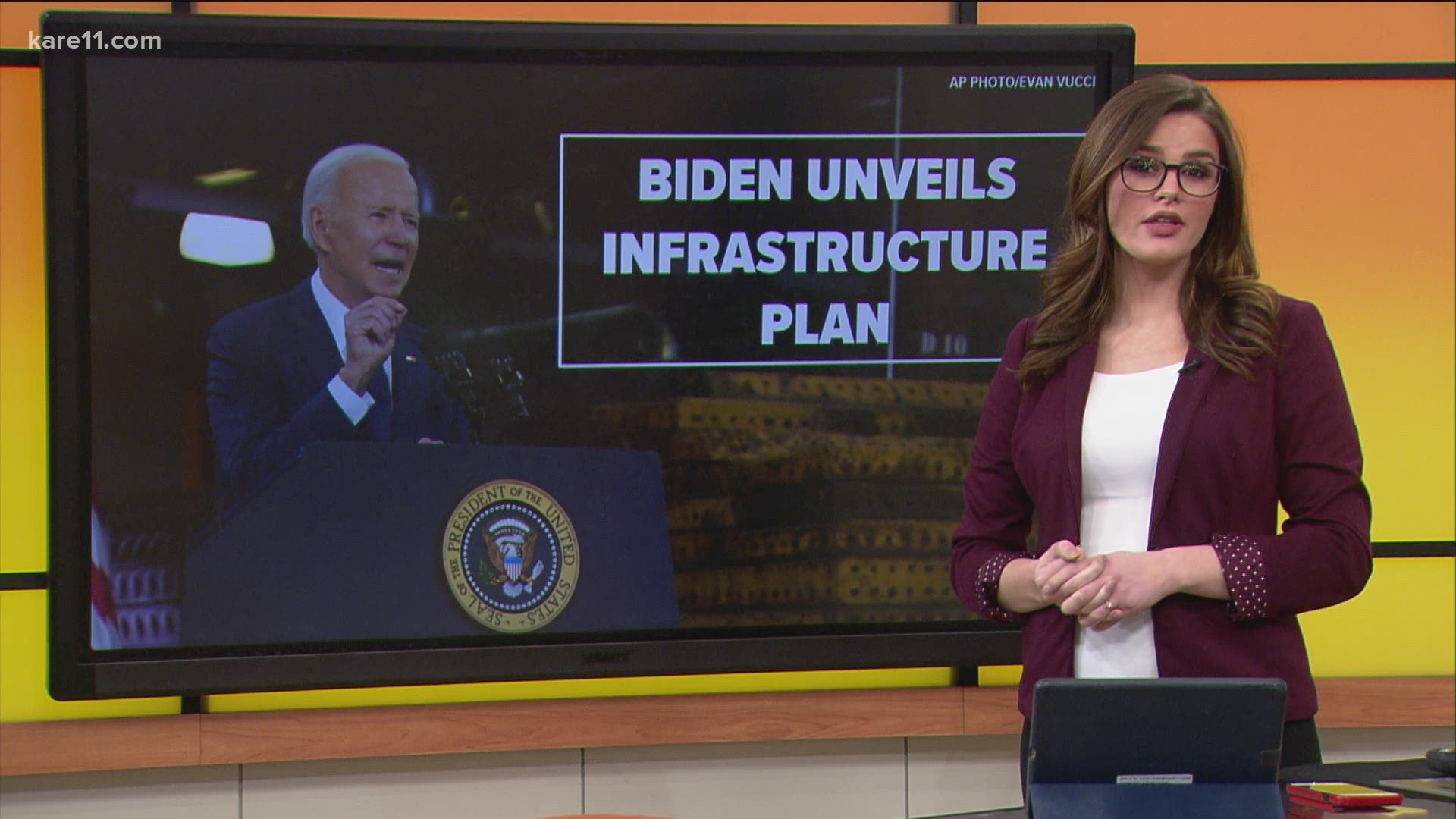 WASHINGTON — With an appeal to think big, President Joe Biden is promoting his $2.3 trillion infrastructure plan directly to Americans, summoning public support to push past the Republicans lining up against the massive effort they sum up as big taxes, big spending and big government.

Republicans in Congress are making the politically brazen bet that it’s more advantageous to oppose the costly American Jobs Plan, saddling the Democrats with ownership of the sweeping proposal and the corporate tax hike Biden says is needed to pay for it. He wants the investments in roads, schools, broadband and clean energy approved by summer.

On Monday, Biden received a boost from an unexpected source. The Senate parliamentarian greenlighted a strategy that would allow Democrats in the evenly split 50-50 chamber to rely on a 51-vote threshold to advance some bills, rather than the typical 60 votes typically needed. The so-called budget reconciliation rules can now be used more often than expected — giving Democrats a fresh new path around the GOP blockade.

Senate Majority Leader Chuck Schumer's spokesman welcomed the parliamentarian's opinion as “an important step forward.” Spokesman Justin Goodman said no decisions have been made on the process ahead, but “this key pathway is available to Democrats if needed.”

The prospects for massive infrastructure investment, once a bipartisan source of unity on Capitol Hill, have cracked and groaned under the weight of political polarization. Where Biden sees urgency in going big, Republicans want a narrow plan that focuses on roads and bridges, and warn that any corporate tax increase would crush economic growth.

“They know we need it,” Biden said of the Republicans as he returned to Washington on Monday. “Everybody around the world is investing billions and billions of dollars in infrastructure, and we’re going to do it here.”

The standoff almost ensures a months-long slog as Congress hunkers down to begin drafting legislation and the White House keeps the door open to working across the aisle with Republicans, hoping that continued public attention will drum up support.

Senate Republican leader Mitch McConnell declared plainly on Monday that Biden’s plan is “something we’re not going to do.”

Speaking to reporters in Kentucky, McConnell said Republicans could support a “much more modest” approach, and one that doesn’t rely on corporate tax hikes to pay for it.

A core dividing line is Biden's effort to pay for infrastructure by undoing Donald Trump's tax break for corporations, a signature achievement of the Trump White House and its partners in Congress.

The 2017 GOP tax bill, which all the Republicans voted for, slashed the corporate rate from 35% to 21%. It was supposed to usher in a new era of American investment and job creation, yet growth never came close to the promised levels and the economy fell into a recession because of the pandemic.

Biden proposes raising the rate to 28% and instituting a global minimum rate to dissuade companies from relocating in lower-tax havens. Democratic senators led by Sen. Ron Wyden, D-Ore., the chairman of the Senate Finance Committee, unveiled their own framework for an international taxation overhaul Monday that could provide an opening to Biden's approach.

“We desperately need reform,” said Sen. Mark Warner, D-Va., one of those involved in the effort.

Shepherding Biden's proposal through Congress remains a work in progress, particularly in the evenly-divided 50-50 Senate, where Democrats have the majority because the vice president from their party, Kamala Harris, can cast a tie-breaking vote.

Credit: AP
President Joe Biden talks with reporters on the Ellipse on the National Mall after spending the weekend at Camp David, Monday, April 5, 2021, in Washington. (AP Photo/Evan Vucci)

But a single senator can break ranks to influence the size and shape of the package. On Monday, Sen. Joe Manchin, D-W.Va., indicated he would prefer a corporate tax rate at 25%, lower than what Biden is proposing.

Seizing on Democratic divisions, Republicans have signaled zero interest in undoing the tax cuts they approved with Trump, and instead prefer a smaller infrastructure package paid for by user fees on drivers or other public-private partnerships that share the costs.

Sen. Roy Blunt, R-Mo., a member of Senate GOP leadership, said Sunday a smaller infrastructure package of about $615 billion, or 30% of what Biden is proposing, could draw bipartisan support.

Administration officials have encouraged Republicans to talk more fully about what they dislike and would do instead, under the opinion that a battle of ideas will only help Biden gain support with voters.

The president has already met twice with bipartisan groups of lawmakers in the Oval Office, and members of Biden’s Cabinet leading the charge on infrastructure have also have placed dozens of calls to lawmakers on both sides of the aisle.

Yet the White House has a fundamental disagreement with Republicans on the definition of infrastructure, such that any outreach is unlikely to yield an agreement.

That leaves Biden and congressional Republicans on a collision course, the outcome of which could define the parties and his presidency.

The GOP strategy is reminiscent of its Obama-era stance more than a decade ago, when the Republicans opposed the 2009 rescue after the economic crisis, framing it as government overreach that piled on debt — an argument they used in 2010 to win back control of Congress.

But it’s not at all certain the GOP playbook that worked more than a decade ago will produce the same political gains this time. Biden is banking on polling that suggests his infrastructure package is popular among voters of both parties, making it easier to bypass any GOP blockade on Capitol Hill.

Touring a water treatment plant Monday in California, Harris said access to clean water was about a broader issue of fairness.

With the state’s governor, Gavin Newsom, Harris noted that families in Iowa and parts of the Midwest needed federal help to upgrade the wells on their properties, while parts of California needed reliable access to fight wildfires.

“We must understand the equities and inequities of distribution and access to clean water, especially clean drinking water,” Harris said.