The pastor of Our Lady of the Pines Parish in Woodville has been placed on temporary administrative leave. 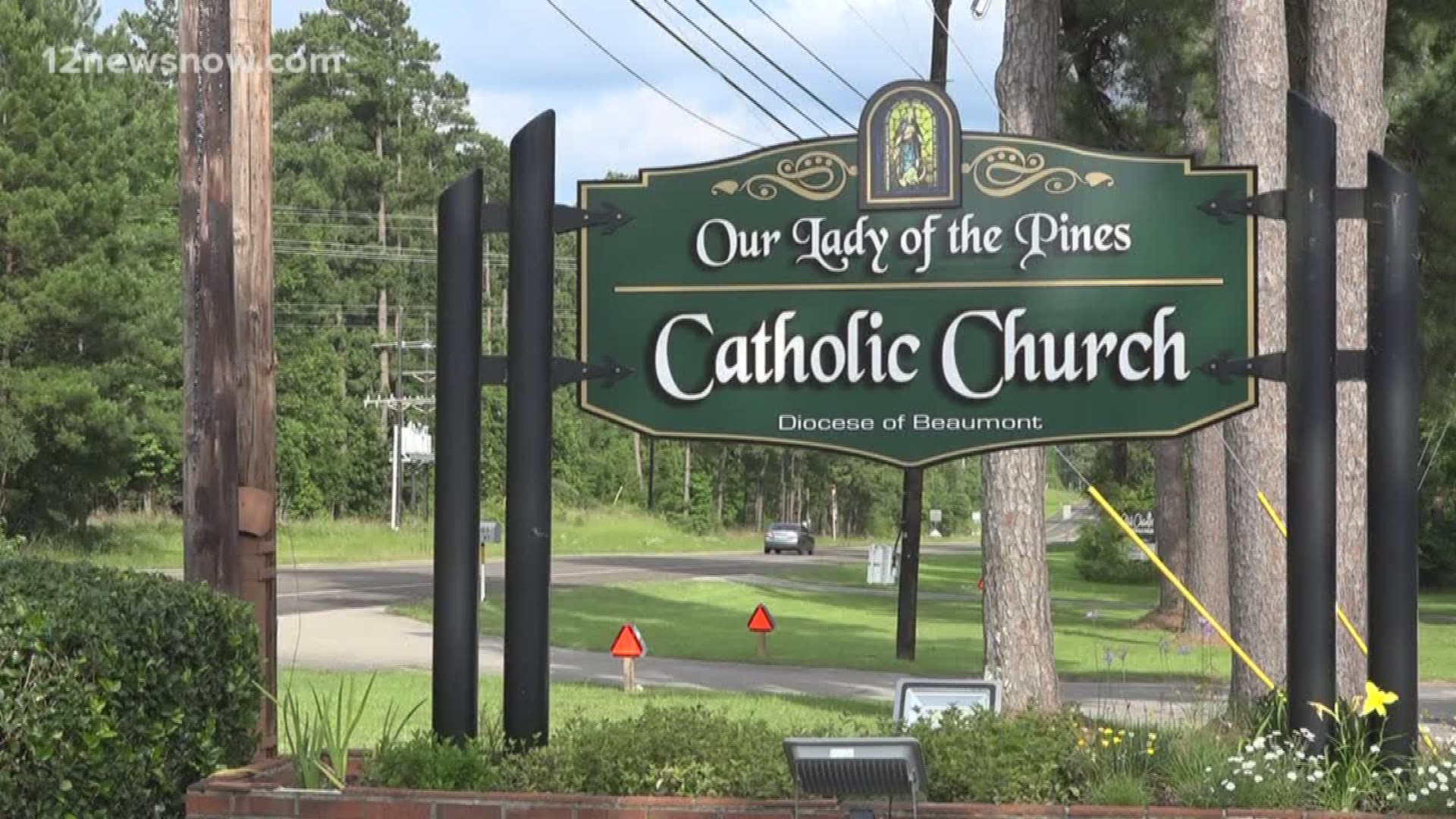 WOODVILLE, Texas — A Woodville priest has been removed from his duties at Our Lady of the Pines Catholic Church after allegations of sexual misconduct at his former diocese surfaced.

Monsignor Frank Rossi, who retired from the Archdiocese of Galveston-Houston, was accepted into the Beaumont Diocese in May 2017 to work at the parish according to a letter sent to parishioners Saturday by the Bishop of the Beaumont Diocese the Most Rev. Curtis J. Guillory.

The Diocese of Beaumont has placed Rossi, who was acting as pastor of the Woodville parish, on temporary administrative leave while a criminal investigation takes place according to the letter.

At the time of the alleged misconduct Rossi was working in the Archdiocese of Galveston-Houston the letter said.

Guillory said in the letter that at the time he came to the Diocese of Beaumont Rossi was a priest in good standing.

Many people in Woodville shared the same sentiment when asked about their reaction to the news.

"That's kind of shocking," said Tyler County resident Robert McKee. "A man's supposed to govern the church and teach people, but he's out doing wrong himself and I don't like that."

The allegations of sexual misconduct involve an adult woman.

"My heart goes out to the woman, she was taken advantage of," said Norris. "She went to him for counseling, she trusted him and he used his position of power to get sexual intercourse from her and that's improper."

The letter says at the time Rossi began working in Woodville, there was no criminal investigation into him.

It adds Rossi completed a renewal program for clergy prior to taking his position with the Diocese of Beaumont in May 2017.

"That's a problem." said Norris. "When you have somebody who has done these kind of actions, they should be removed immediately and taken away from that position of power."

A spokesperson for the Diocese of Beaumont refused to tell 12News which law enforcement agency is handling the investigation.

Mckee believes if Rossi did something wrong, he should be honest.

"If he's done wrong, he needs to admit it," said McKee. "I do know men can make mistakes."

Bishop Guillory has asked for prayers for everyone involved in this situation.

The Survivors Network of Those Abused by Priests released a statement, in part saying, "This case is all-too-typical of how bishops treat adult abuse survivors. Given how Pope Francis himself has recently talked about the difficulties faced by adult victims, we hope that Church leaders here in the United States would recognize those difficulties as well."

Survivors Network of those Abused by Priests statement:

The head of the US bishops is once again under fire for inaction in a case of clergy sex abuse. We call on him to resign his post or at least recuse himself from leading the bishops’ meeting in Baltimore next week.

This time, Cardinal Daniel DiNardo reportedly deceived an abuse victim and quietly moved her perpetrator – Monsignor Frank Rossi, one of his highest-ranking deputies – to another parish, even after telling the victim that Msgr. Rossi would never be a pastor again.

According to the AP, in 2016, Cardinal DiNardo told Laura Pontikes that he believed she was a victim because Msgr. Frank Rossi had sexually exploited her. Still, according to records obtained by reporters, the Cardinal instead made Msgr. Rossi the head of an eastern Texas parish without telling Laura and apparently without disclosing the allegations to the public or parishioners. When Laura’s husband confronted Cardinal DiNardo, “the cardinal warned that the archdiocese would respond aggressively to any legal challenge — and that the fallout would hurt their family and business.”

We applaud Laura for coming forward about her experience. It is incredibly challenging for any victim to come forward and especially for those who were abused as adults. Fortunately for folks in Texas, Laura was willing to put her reputation on the line in speaking out against wrongdoing and in standing up for other survivors. We are very grateful for her courage and stand in solidarity with Laura and other victims who were abused as adults.

This case is all-too-typical of how bishops treat adult abuse survivors. Given how Pope Francis himself has recently talked about the difficulties faced by adult victims, we hope that Church leaders here in the United States would recognize those difficulties as well. Sadly, in this case, Cardinal DiNardo has instead compounded them.

Making matters worse, this is not the first time that the Cardinal has been accused of mishandling cases of abuse and treating victims poorly. Last year – ironically, also in another week leading up to a USCCB meeting – the National Catholic Reporter reported that Cardinal Daniel DiNardo was aware of a Sioux City priest’s 1986 confession that he had molested at least 50 children over a twenty year period and did nothing.

In the months following that report, more facts came to light regarding Cardinal DiNardo’s willingness to keep in ministry other priests who had been accused of abuse.

It is time for Cardinal DiNardo to resign. If he doesn’t, he should at least step aside and let another prelate run next week’s USCCB meeting. Regardless  of what the Cardinal does or does not do, his brother bishops should denounce and oust him. Otherwise, they make a mockery of their pledges to change, to prevent more abuse, to treat victims with dignity and to be transparent.