The video on was posted on YouTube Sunday morning and by Monday afternoon the video had been viewed more than 19,742 times and was being talked about on social media in Southeast Texas. 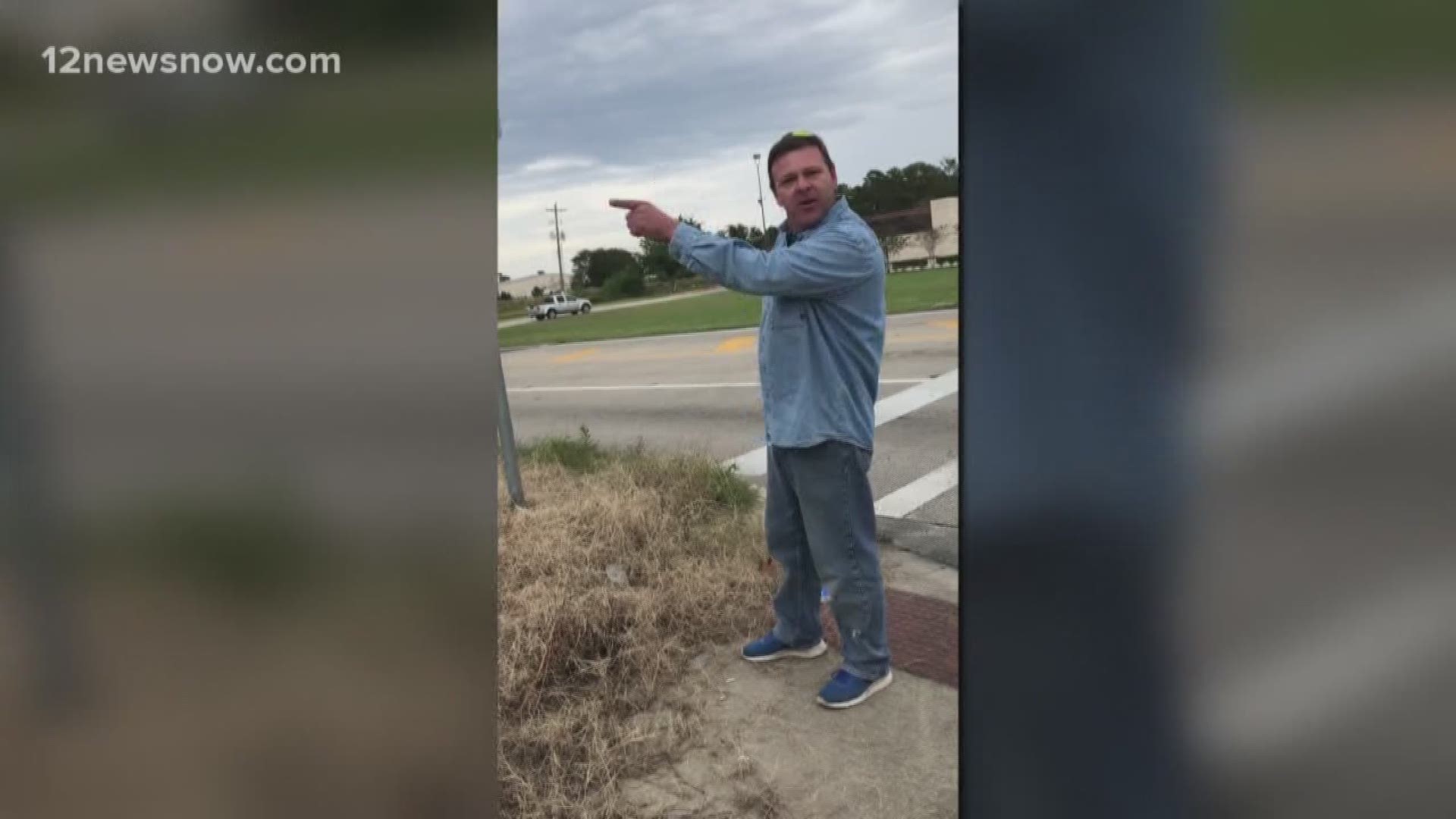 Jeremy and Tracie Parzen, of Houston, were about five minutes into a protest at about 2 p.m. Saturday in front of the Confederate Memorial of the Wind monument on MLK Jr. Drive at Interstate 10 in Orange when an unidentified man passed by yelling obscenities at them from a pickup truck.

Tracie, 43, was raised in Orange and still has family there while her husband, Jeremy is 51 and is from San Diego, CA.

A member of the Sons of Confederate Veterans previously told 12News the group plans to add 32 flags to represent Texas regiments of the Confederate army.

Jeremy posted the video on YouTube Sunday morning and by Monday afternoon the video had been viewed more than 19,742 times and was being talked about on social media in Southeast Texas.

12News has spent the past 24 hours trying to identify the man seen in the video. We want to hear his side of the story. Viewers have identified him to us, but until we can reach him, we are not naming him.

"We were really surprised someone was so aggressive with us," Jeremy said during an interview Monday conducted via FaceTime.

The couple, who started the group RepurposeMemorial.com last year, had planned to meet up with at least two others for the protest but were alone at the time of the incident.

After passing by, the man pulled over across the street several hundred feet away from the couple and walked toward them according to the Parzens.

Jeremy Parzen told 12News he had no idea what the man might say or do so they decided to record the encounter. Tracie Parzen began shooting video on her phone as the man approached them.

"Why don't ya'll get out of here? What gives ya'll the right to be F----ing protesting America?," he yelled out to them as he approached.

"This is free speech. We can stand on this corner," Tracie Parzen can be heard calmly saying to the man.

The man then wanted to know if they had a permit to which Tracie replied that they didn't need one.

The man disagrees saying they need a permit and tells them they "need to leave this place."

Credit: Courtesy Jeremy Parzen
These are some of the signs the Parzens said they were holding Saturday while protesting the monument.

"It's people like ya'll that are destroying America's history," he continues to yell.

Tracie Parzen continues to calmly speak to the man who becomes more agitated throughout the two-minute video.

He then continues to berate them and complain about Democrats destroying "our heritage."

By the end of the video the man is screaming "this is America's heritage… and you don't have a right to try and destroy it. And that's all you stupid son of a bi---es try and do. You're worthless. You're s-t. You don't like us… get the f-k across the border. F--k y'all."

As he leaves Tracie Parzen, whose father is a preacher in Orange, calls to him saying "Jesus loves you" to which he replies… "Yeah you're damn right he does. But he f---ing hates you"

Throughout the video a digital billboard can be seen over the man's shoulder where several times a purple screen and message appears.

It reads… "The Confederate Memorial of the wind doesn't reflect Orange, Texas community values. Please ask the Sons of Confederate Veterans to repurpose this site.

The group just had the billboard put up last Thursday to run throughout November according to Jeremy Parzen.

The Parzens told 12News that they have held several protests at the monument since they started their group last year. They say that for the most part they see lots of support for what they are doing telling 12News that at least 90% of the feedback they receive from people in Orange is positive.

"One in 10 give us the middle finger and maybe one in 20 will yell obscenities at us" Jeremy Parzen says.

They say they have had people who disagree with their protest stop and carry on a civil conversation with them.

"We were surprised by how aggressive he was," Parzen said.

"This was the first time someone came and 'got in our face' so to speak," he said. "That surprised us."

The couple tells 12News they have been in contact with the Sons of Confederate Veterans who began building the monument in 2013.

They say they've requested the group change the monument to something less divisive.

After the man left two more protestors arrived and the protest lasted until about 4 p.m. without further incident.

MAN : "Why don't ya'll get out of here? What gives ya'll the right to be F----ing protesting America?" (as he approaches from the down the street.)

TRACIE: "We have… This is free speech. We can stand on this corner,"

MAN: "Free speech… Do ya'll even have a permit to be out here?"

TRACIE: "I'm recording you. I'm just letting you know. (The man is now face to face with the Parzens)

MAN: "I don't care if your recording me or not but y'all need to leave this place" (He gestures to the monument.)

MAN: "It's people like ya'll that are destroying America's history

TRACIE PARZEN: Why are you so angry, sir?"

TRACIE: "Well why does this make you so angry? We're just…"

Man: "This don't make me angry" pointing to monument

MAN: "I take pride in that" (He gestures toward monument.)

MAN: Because it's dumb-a-- Democrats.. Look what ya'll are doing to our country. Ya'll are a bunch of damn idiots" (He begins to get louder)

"You try and destroy our heritage, you're tearing down monuments (He points to the monument again) because ya… Ya'lls beliefs. Ya'll don't give a damn about nobody's beliefs but you damn own dumb a--es"

MAN: "Ya'll are pieces of s-t and you're out here… ( He begins to yell even louder.) THIS IS AMERICA'S HERITAGE… AND YOU DON'T HAVE A RIGHT TO TRY AND DESTROY IT. AND THAT'S ALL YOU STUPID SON OF A BITCHES TRY AND DO. YOU'RE WORTHLESS. YOU'RE S-T. YOU DON'T LIKE US… GET THE F-K ACROSS THE BORDER. F--K Y'ALL.

(He then turns and walks away.)

TRACIE: Calls to him… "Jesus loves you."

MAN: "Yeah you're damn right he does. But he f---ing hates you" (He turns around to yell this at them from down the street about 50 feet.) 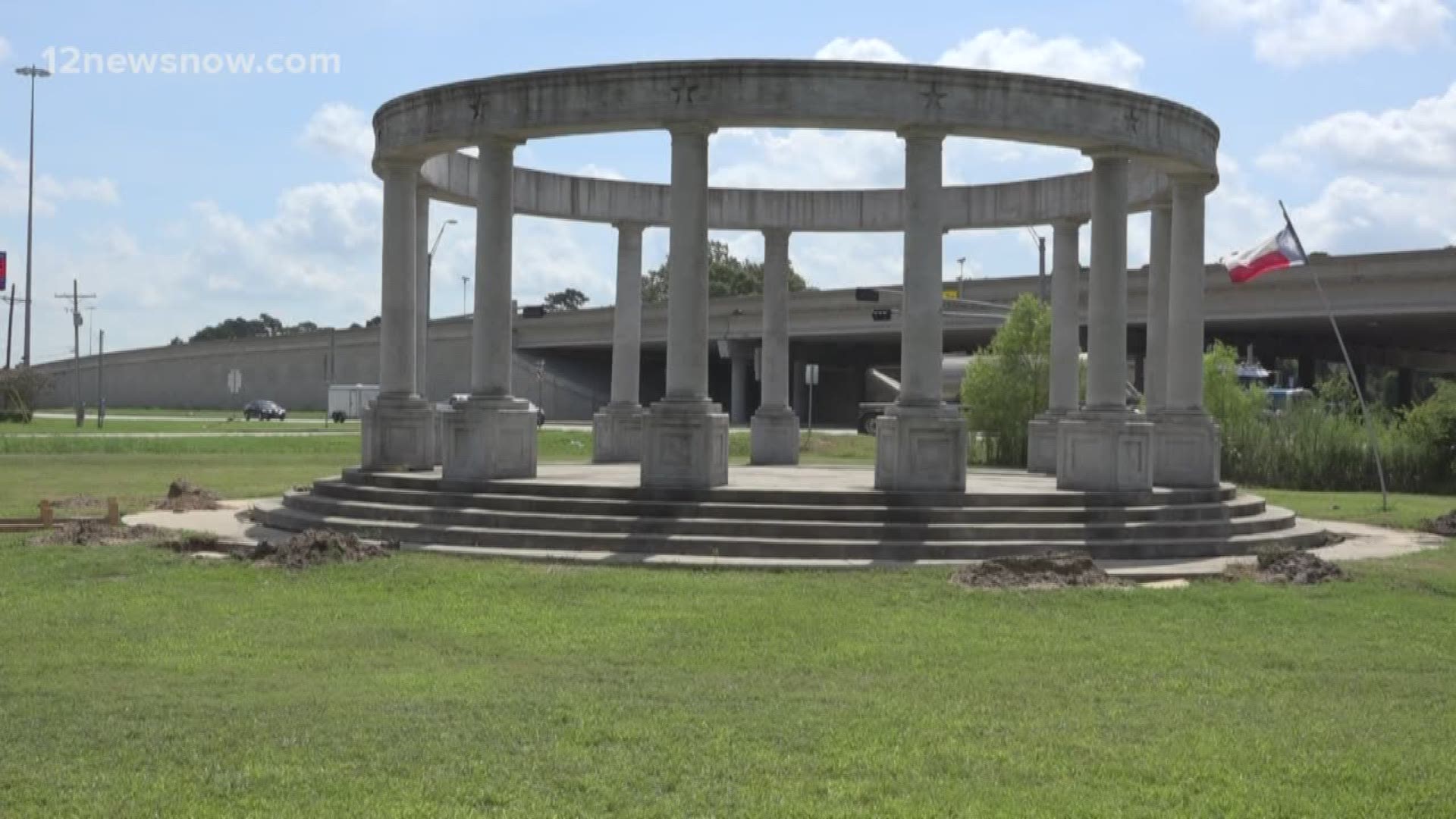