Hundreds participate in 'March for Our Lives' in downtown Beaumont

262 people participated in the March for Our Lives event in downtown Beaumont on Saturday, marching 8 blocks. 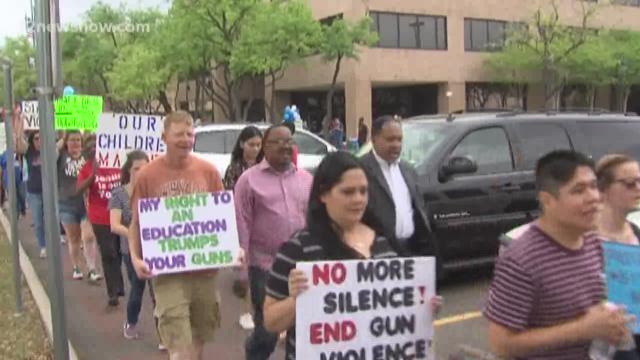 Saturday afternoon, protestors gathered at City Hall in Downtown Beaumont to participate in the March for Our Lives rally

262 people came together to march in solidarity with the hundreds of other march for life rallies going on across the country. The cause? To raise awareness about gun violence and mental health, as well as school shootings. All this in the wake of the Stoneman Douglas school shooting in February.

“It is slow, but I do see a lot of progress,” said Carley Exiga, President of the Lamar University Social Work Student Association. “So many community members have reached out to make this a big as possible.”

The Beaumont march was started by the SWSA in partnership with the Stop the Violence group. Along with marching eight blocks during the rally, there was also a table set up where people could register to vote. Davon Chargois, Vice President of the Lamar SWSA says the action of walking helps spread the message, but it’s your votes that count.

“Of course marching and everything is fine, but the biggest step in to making a change in your community, and of course the country, is getting your vote out,” said Chargois.

However, some may feel that just a march alone doesn’t help you reach your intended goal. Beaumont city councilman Mike Getz, who attended the march as a spectator, says that while a nice symbol, protestors need a more specific plan of action.

“You can chant, you can march, but if you’re just marching without specific proposal, all you’re really doing is exercising,” said Getz.

Carla Viator, a middle school teacher and gun owner, says that while someone in Beaumont may not have the specific solution to the gun debate, the actions shown across the country today may spring those in power into action.

“No one has the solution, but by exercising, and not just sitting on the couch that’s the way that the solutions happen," said Viator.