Beaumont ranks as third most dangerous city in Texas

Beaumont was ranked the third most dangerous city in the state of Texas by a study that was done by a Houston law firm. 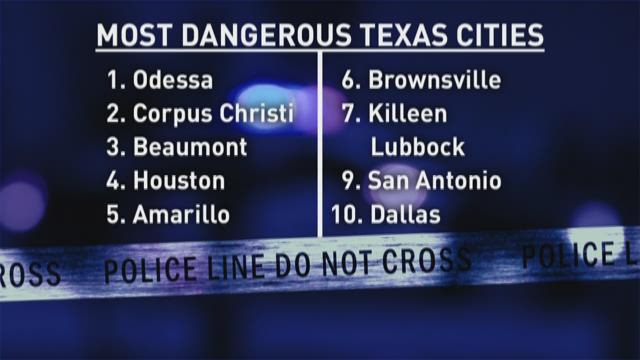 Beaumont was ranked the third most dangerous city in the state of Texas by a study that was done by a Houston law firm.

The law firm compiled data that ranked the ten most dangerous cities in Texas. Beaumont was ranked third most dangerous, ahead of larger cities such as Houston and Dallas.

Alberta Brown, a 60 year resident of Beaumont is heartbroken to see crime in her hometown day after day.

The Houston-based law firm compiled data from the FBI’s uniform crime reporting program, compiling data from cities with populations only above one hundred thousand people.

The law firm stated, "It may be no surprise that of all the Texas cities, Houston has both the highest raw number and rate of violent crime. However, Houston does not have the highest murder rate – which belongs to nearby Beaumont – and is in the bottom third for rate of rape – top spot here goes to Amarillo by a substantial margin."

The firm included the crime rank, police presence rank, along with socioeconomic factors to compile the data.

Beaumont holds the first highest murder rate, listed as seventh in sexual assaults, and third in all violent crimes per capita.

People like Brown feel that being vigilant and getting involved is one of many steps to take to fight crime in her city.

"I just hope that it stops, it needs to stop, really," Brown said.

You can find more information on the law firm's findings here.