US health officials call for booster shots against COVID-19

The plan calls for an extra dose eight months after people get their second shot of the Pfizer or Moderna vaccine. 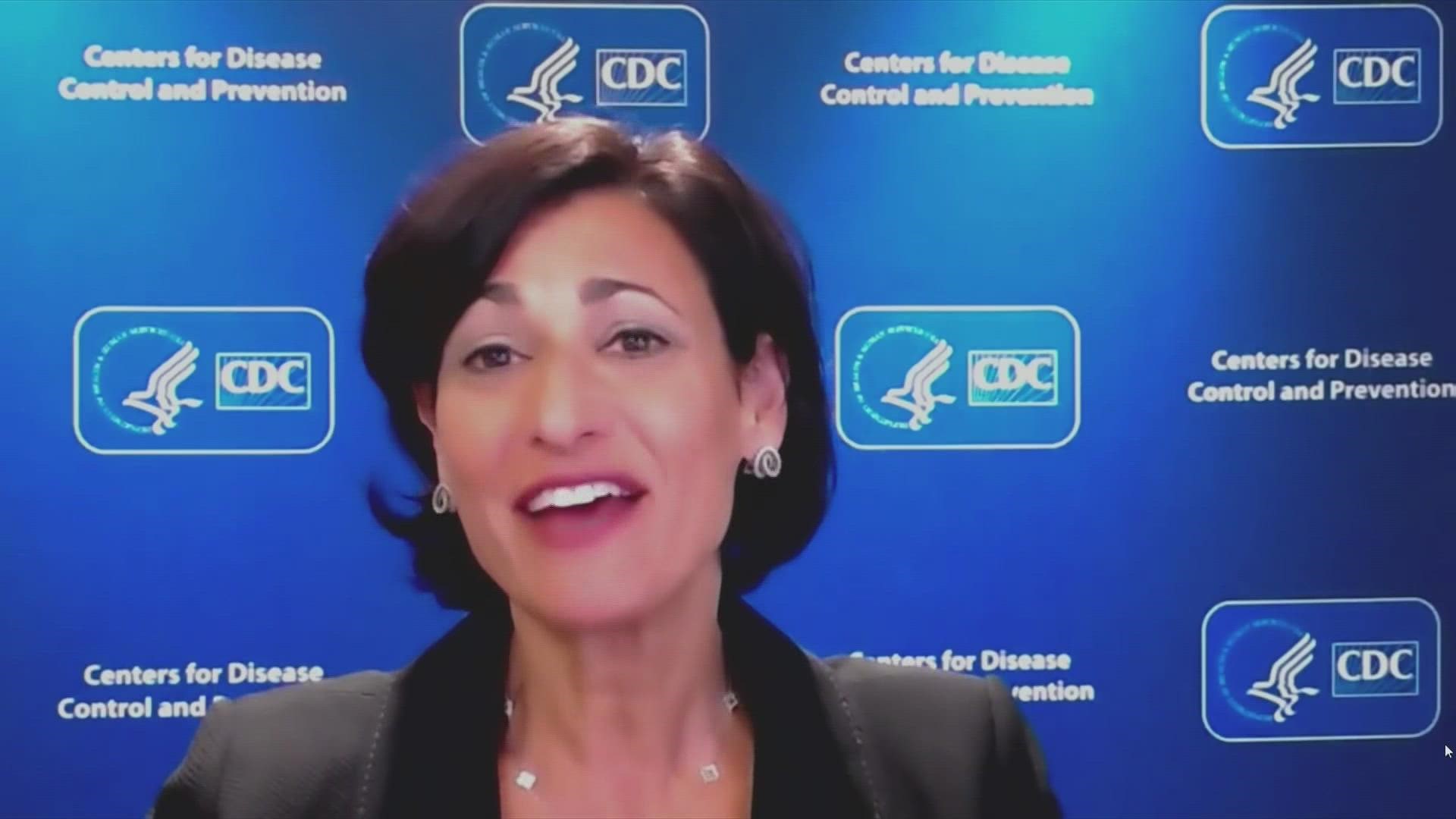 WASHINGTON — U.S. health officials Wednesday announced plans to dispense COVID-19 booster shots to all Americans to shore up their protection amid the surging delta variant and signs that the vaccines' effectiveness is falling.

The plan, as outlined by the Centers for Disease Control and Prevention and other health agencies, calls for an extra dose eight months after people get their second shot of the Pfizer or Moderna vaccine. The doses could begin the week of Sept. 20.

“Our plan is to protect the American people, to stay ahead of this virus,” CDC Director Dr. Rochelle Walensky said as the agency cited a raft of studies suggesting that the vaccines are losing ground while the highly contagious variant spreads.

People who received the single-dose Johnson & Johnson vaccine will also probably need extra shots, health officials said. But they said they are waiting for more data.

The overall plan is subject to a Food and Drug Administration evaluation of the safety and effectiveness of a third dose and a review by a CDC advisory panel.

The announcement came the same day the Biden administration said it would require nursing homes to mandate vaccinations for staffers in order to continue receiving federal funds. Hundreds of thousands of nursing home workers remain unvaccinated, despite the heightened risk of fatal infections among elderly residents.

Officials said it is “very clear” that the vaccines’ protection against infections wanes over time, and they noted the worsening picture in Israel, which has seen a rise in severe cases, many of them in people already inoculated. They said the U.S. needs to get out ahead of the problem before it takes a more lethal turn here and starts leading to increasing hospitalizations and deaths among the vaccinated.

Dr. Anthony Fauci, the government's foremost expert on COVID-19, said that one of the key lessons of the coronavirus is that it’s better to “stay ahead of it than chasing after it.”

The first boosters would go to people in high-priority groups that received the initial U.S. vaccinations: nursing home residents, health workers and those with underlying health conditions. Health officials are likely to recommend that the booster be the same brand of vaccine that people received initially.

Dr. Mark Mulligan of NYU’s Langone Health center welcomed the announcement, saying: “Part of leadership is being able to see around the corner and make hard decisions without having all the data. It seems to me that’s what they’re doing here."

Top scientists at the World Health Organization bitterly objected to the U.S. plan, noting that poor countries are not getting enough vaccine for their initial rounds of shots.

“We’re planning to hand out extra life jackets to people who already have life jackets, while we’re leaving other people to drown without a single life jacket," said Dr. Michael Ryan, the WHO’s emergencies chief.

The organization's top scientist, Dr. Soumya Swaminathan, said the evidence does not show boosters are needed for everyone, and she warned that leaving billions of people in the developing world unvaccinated could foster the emergence of new variants and result in “even more dire situations."

U.S. Surgeon General Vivek Murthy rejected the notion that the U.S. must choose between “America and the world.”

“We clearly see our responsibility to both, and we've got to do everything we can to protect people here at home while recognizing that tamping down the epidemic across the world is going to be key,” Murthy said.

White House officials noted that the U.S. has donated 115 million doses to 80 countries, more than all other nations combined. They said the U.S. has enough vaccine to dispense boosters to the American people.

Israel is already offering booster shots to people over 50. And European regulators are looking into the idea.

Last week, U.S. health officials recommended a third shot for some people with weakened immune systems, such as cancer patients and organ transplant recipients. Offering boosters to all Americans would be a major expansion of what is already the biggest vaccination campaign in U.S. history. Nearly 200 million Americans have received at least one shot.

Some experts have expressed concern that calling for boosters would undermine the public health message — and reinforce opposition to the vaccine — by raising more doubts in the minds of people already skeptical about the shots’ effectiveness.

As for why the vaccines appear to be less effective over time at stopping infections, there are indications that the body’s immune response to the shots fades, as it does with other inoculations. But also, the vaccines simply may not protect against the delta variant as well as they do against the original virus. Scientists are still trying to answer the question.

Officials said the eight-month timeframe was a judgment call about when vaccine protection against severe illness might fall, based on the direction of the current data. "There’s nothing magical about this number,” the surgeon general said.

Nearly 20 months into the outbreak, the scourge has killed 620,000 Americans. Just weeks after President Joe Biden declared the country’s “independence” from COVID-19 on July Fourth, emergency rooms in parts of the South and West are overloaded again, and cases are averaging nearly 140,000 per day, quadrupling in just a month.

In making its announcement, the CDC released a number of studies conducted during the delta surge that suggest that the vaccines remain highly effective at keeping Americans out of the hospital but that their ability to prevent infection is dropping markedly.

One of the studies looked at reported COVID-19 infections in residents of nearly 15,000 nursing homes and other long-term care facilities. It found that the effectiveness of the Pfizer and Moderna vaccines against infection fell from about 74% in March, April and early May to 53% in June and July.

The study examined all COVID-19 infections, with or without symptoms. The researchers said more work is needed to determine if there was a higher incidence of infections that resulted in severe illness.

Another study was a look at 21 hospitals. It found that the vaccine's effectiveness in preventing COVID-19-associated hospitalizations was 86% at two to 12 weeks after the second dose, and 84% at 13 to 24 weeks after. The difference was not considered significant.

A third study, conducted in New York state, found that protection against hospitalizations stayed steady at about 95% over the nearly three months examined. But vaccine effectiveness against new laboratory-confirmed infections declined from about 92% in early May to about 80% in late July.

Also, the CDC released Mayo Clinic patient data from Minnesota that showed that in July, when the delta variant was prevalent, Moderna's vaccine was 76% effective against infection and Pfizer's 42%.

Some scientists had been looking for signs that hospitalizations or deaths are increasing, as a necessary indicator that boosters might be needed.

To some leading scientists, the new studies “would not be sufficient, in and of themselves, to make the case for a booster,” said Dr. William Schaffner, an infectious-diseases expert at Vanderbilt University and liaison to an expert advisory panel that helps the CDC form its vaccination recommendations.