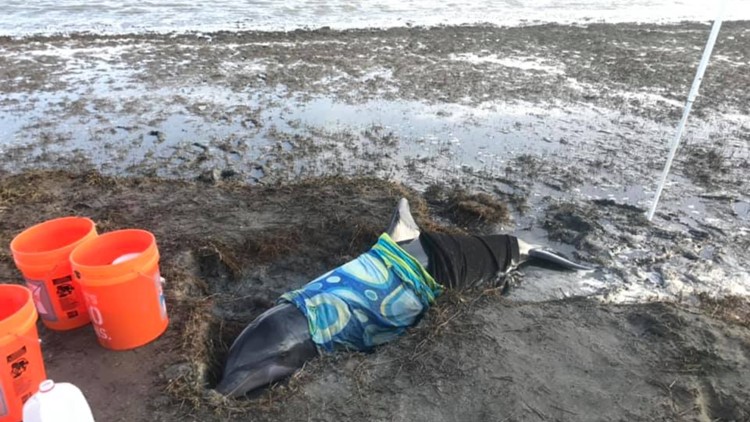 JEFFERSON COUNTY, Texas — Although rescuers worked to free a dolphin stranded on the beach near Sea Rim State Park on the 4th of July, she later died Friday morning.

"Our team worked very hard over the last 24 hours to save the dolphin we rescued from Sea Rim State Park," Texas Marine Mammal Stranding Network said in a Facebook post. "But in the end, she was just too ill to make a recovery."

When the team who had been working nonstop for 36 hours to save her noticed her condition declining rapidly, the veterinarian made the decision to euthanize her.

"It was an eventful July 4th for our team," The Texas Marine Mammal Stranding Network said in the initial Facebook post.

Park Supervisor Nathan Londenberg notified the non-profit about the female dolphin in need of help. He and other beachgoers, Ethan and Jenny Blood, David Raiford and Cindy Barnes took care of the dolphin until the rescue team arrived.

"Not only did Ethan and Jenny help rescue the dolphin, but they also helped rescue our 4-wheel-drive rescue truck that became stuck," the organization said. "We can’t thank them enough."

The group loaded the dolphin into a transport van.

"She was brought to our facility in Galveston for veterinary evaluation and possible rehab," the Texas Marine Mammal Stranding Network said.

The Texas Marine Mammal Stranding Network said they appreciate the help and generosity for their team and the dolphin since is a non-profit organization mostly staffed by volunteers.