Hurricane Isaias headed up the US Atlantic Coast

Hurricane Isaias will scrape by FL this weekend, then up the Atlantic Coast, into the northeast this early next week. 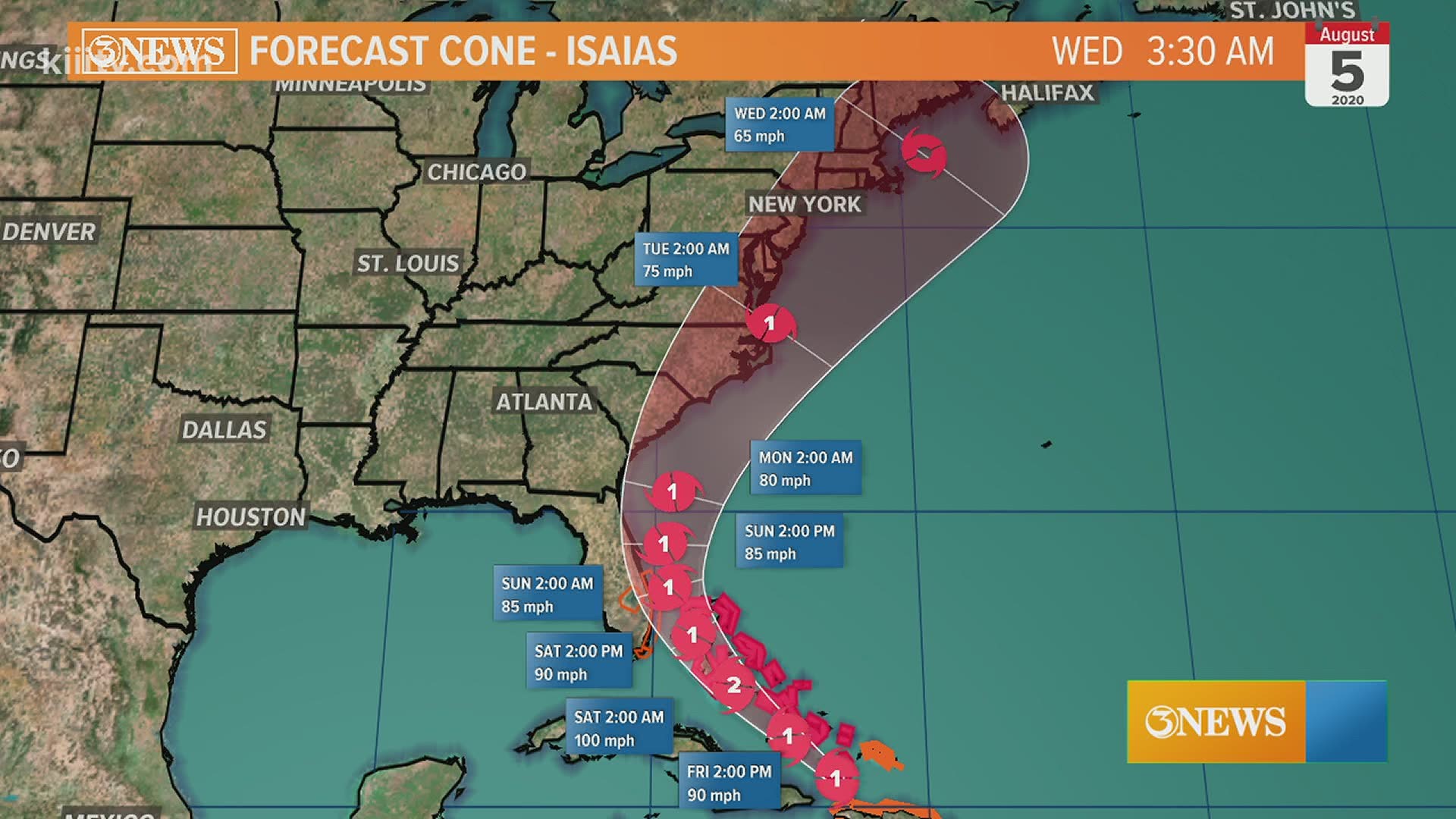 Isaias is now a Category one hurricane and may strengthen to category two status as it moves over the Bahamas Friday night and early Saturday.  Isaias will then scrape by the Florida Coast as a hurricane and may make landfall in North Carolina as it parallels the SE Atlantic Coast.  It'll then weaken to a tropical storm into the mid-Atlantic and New England Monday through Wednesday.

Isaias is not a threat to Texas. A pair of tropical waves in the Atlantic Basin also may develop in the coming days, but neither of those is a threat here, either.

Over the last 34 hours, we've also seen another shift in forecast model guidance.  With a center found, models are able to initialize better; meaning, they have a better starting point.  That being said, the forecast envelope is more easterly than yesterday, with most guidance paralleling Isaias up the SE Atlantic Coast this weekend.

The NHC Forecast cone reflects this shift as Isaias is forecast to bend around the influence of the Bermuda High.  Forecast cone keeps Isaias at tropical storm strength.

Potential Tropical Cyclone 9 is now in the Eastern Caribbean  It doesn't have a defined center, but is still producing tropical storm force winds, thus the lack of a name.  Once a defined center is found, it will be dubbed, Isaias (Can we nickname it IZZY??).  The NHC forecast cone brings this system up the west coast of Florida this weekend as a tropical storm.  Not a threat for Texas at this time.  However, there are some trends to note this morning....

Without a defined center yet, forecast guidance will have some reliability issues.  That being said, there has been a noticeable shift west on the forecast path.  Now, running up the west coast of the Florida Peninsula.  I attached the spaghetti plot below and grabbed an images of locations of the center from the GFS and Euro ensembles.  Note that the Spaghetti plot is not as far west as the ensembles.

As of Wednesday morning, this is something to watch, not worry about in Texas.  We will continue to update as this system evolves.

UPDATE: July 28, 7am - Invest 92L, a tropical wave in the Atlantic basin was garnering a lot of attention as the next storm to develop last weekend. The National Hurricane Center is giving it a high probability to develop in the coming days - Isaias when/if named.  It will likely skirt the north fringe of the Caribbean and bend up the Southeast Atlantic Coast into early August; strength TBD.

92L also has some inhibitors of tropical development in its path.  Specifically, some Saharan dust (dry air) and some wind shear.

Spaghetti plot shows forecast model guidance steering the to the north before reaching the Gulf of Mexico.

As always, if or when things changes, we'll be here with the latest.  For now, something to watch, not worry about.