VERIFY: Did the Farmers' Almanac predict this week's winter storms?

Viral videos and social media posts say the Almanac's predictions got the exact dates, but they're a little off. 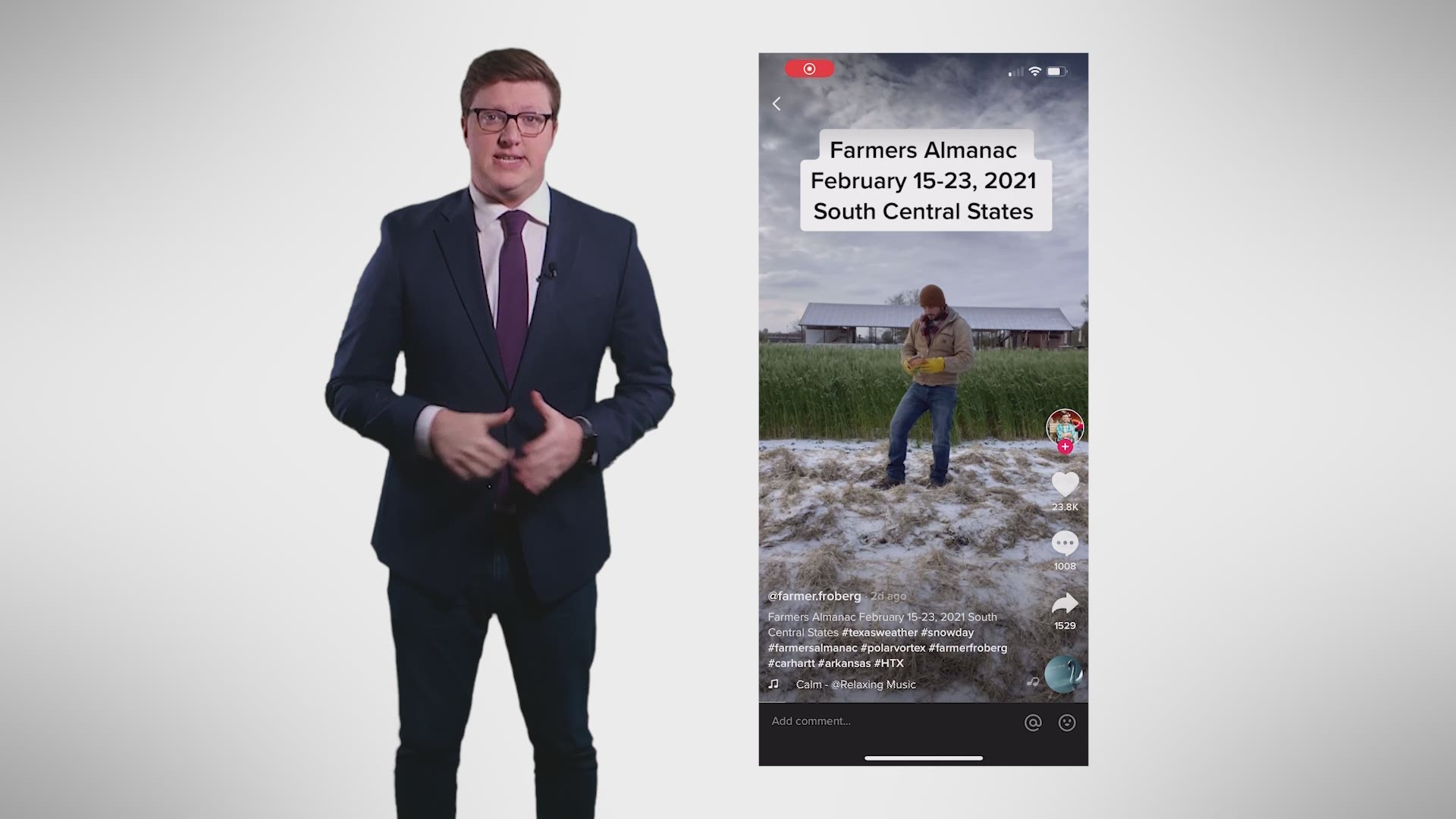 A TikTok video of a person reading out the Farmer’s Almanac’s weather predictions for Texas this week has gone viral after it appeared the almanac nailed the severe weather event from a year out.

But, the prediction is actually being given more leeway than it initially appears.

Did the Farmer’s Almanac predict this week’s winter storm in Texas?

It did predict there would be heavy snow in much of Texas in February, but that prediction was off on timing and severity.

WHY WE ARE VERIFYING

The TikTok video has gotten tens of thousands of likes on that platform alone and is being shared as evidence of the Farmer’s Almanac’s accuracy.

The person in the video reads an excerpt from the Farmer’s Almanac for the weather forecast between February 15 and February 23 for the south central United States. “Changeable skies getting colder. Heavy snow in eastern New Mexico, Oklahoma and all of Texas. Wintry mix through all of Arkansas, Louisiana.”

That sounds pretty spot on. But it’s a slightly misleading presentation of the Farmer’s Almanac’s weather forecast.

Both the physical version of the Farmer’s Almanac pictured below and the almanac’s website say the same thing.

So in actuality, the dates are slightly off. So far this week, Texas was supposed to experience “changeable skies” and a drop of temperature with clear skies. The snow that Texas was hit with this week was actually supposed to begin this weekend and go into next weekend.

And the Farmer’s Almanac doesn’t mention the record-breaking frigid temperatures or just how severe the storms have been.

But still, the fact that the Farmer’s Almanac was as close as it was is pretty impressive. People have always attested to the almanac’s accuracy in its weather’s forecast, so much so that researchers at the University of Illinois-Urbana studied its accuracy back in 1981. They found the almanac got its forecasts correct 51% of the time.

So the Farmer’s Almanac does get it right half the time. But it’s also vague enough to boost its accuracy. Where does “much of Texas” end and “south Texas” begin? How much colder was it supposed to get between February 15 and February 20? The almanac leaves all of that out.

Its forecast was close. It predicted there would be heavy snow in Texas and was just a few days late on when it would happen. But it made no mention of the severity in both the storm and temperature. And presenting the snow forecast as a forecast for “February 15-23” is misleading since the snow was only supposed to happen on the last few days of that forecast.

RELATED: How to stay safe and warm both with or without power

RELATED: VERIFY: How much are coal, natural gas sources to blame for Texas power woes?