Four years later, the Arctic Outbreak struck. Temperatures fell to 8 degrees at Sabine Pass, 4 degrees at Beaumont and near zero in Jasper. 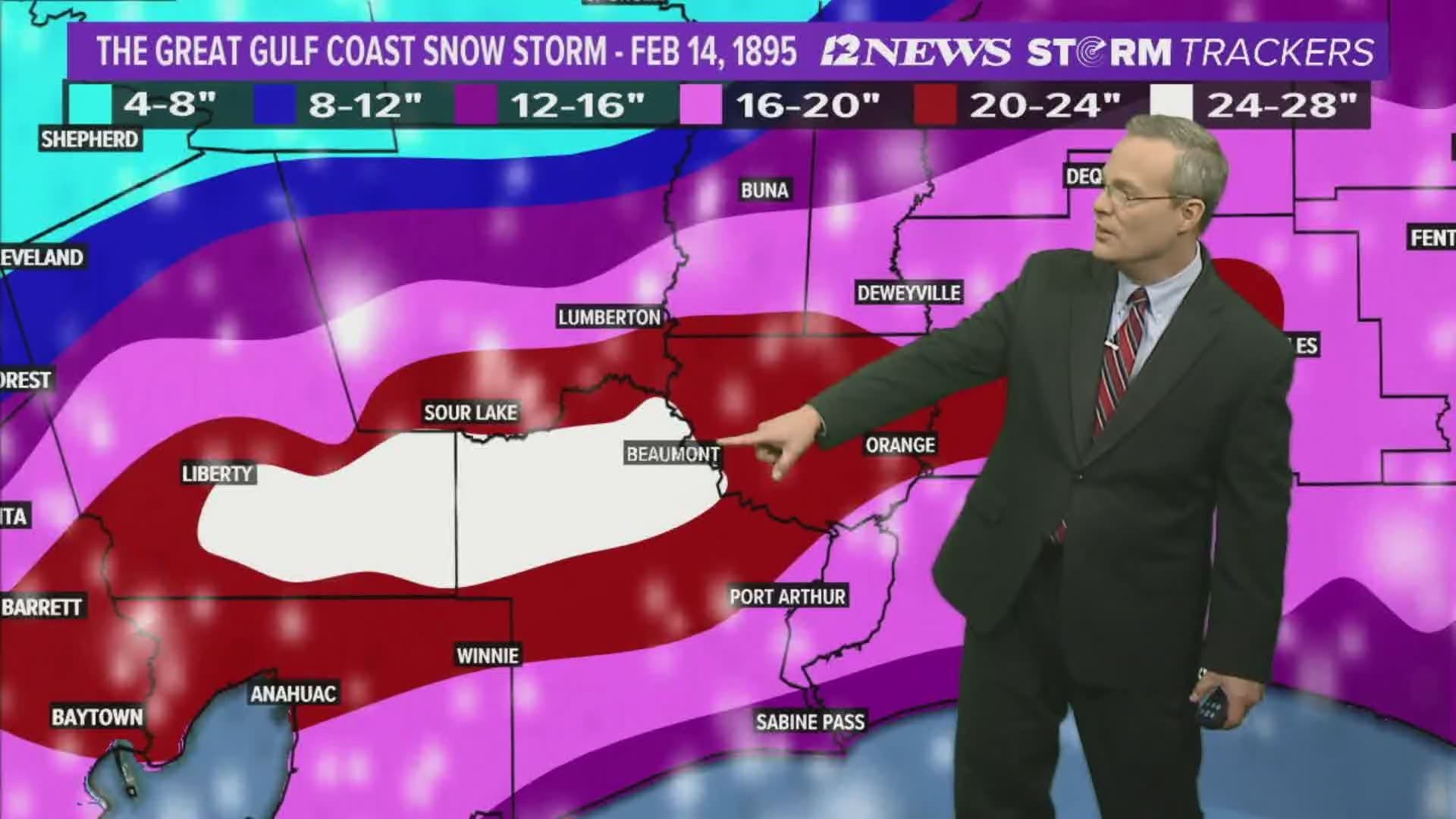 BEAUMONT, Texas — Snow is not a common event in Southeast Texas.

However, today marks the 125th anniversary of the Great Gulf Coast Snowstorm across Texas and Louisiana.

This event produced the greatest amount of snowfall over Southeast Texas ever to be recorded since the area was settled.

The snow was so heavy that trains couldn’t plow through the snow and snowshoes had to be used in the city.

Credit: 12News
Up to 30 inches of snow fell over SE Texas

Snowfall amounts of 4 to 8 inches fell across the Lakes Area of SE Texas.

However, snowfall amounts of a foot to 2.5 feet fell across the Triangle, crippling travel.

Credit: 12News
4 to 12 inches of snow fell over the Lakes Area of SE Texas

Even New Orleans, LA reported 8 inches of snow which effectively shut down the city’s streetcar routes.  Imagine over 15 inches on Galveston Island!

Credit: 12News
Regional snowfall totals due to the Great Gulf Coast Snowstorm of 1895

This resulted in significant cattle kill, with reports of them dying “in piles” in the streets of Beaumont.  At times, only heads and horns could be seen because of the snow drifts of 6 feet!

The picture below shows cattle walking down the streets of Beaumont in the snow shot from the Jefferson County Courthouse. The image below is a courtesy photo from the Stephen F. Austin State University archives.

Limited pictures of the time reveal the historic snowfall amounts of 14 inches at Kountze, TX.

The snow stayed on the ground for ten days.

Just four years later almost to the day, the Great Arctic Outbreak stuck plunging the nation into one of the greatest cold spells in our nation’s history.

Credit: 12News
Then, 4 years to the day, the Great Arctic Outbreak of 1899 struck the country

Southeast Texas was not immune. This event brought the coldest weather to our area ever recorded.

Temperatures fell to 8 degrees at Sabine Pass, 4 degrees at Beaumont and near zero in Jasper.

Credit: 12News
The coldest weather since SE Texas has been settled occurred during this time.

Temperatures of minus 20 were common in the Ohio River Valley, and an astonishing -61 degrees was recorded at Fort Logan, Montana!

Temperatures across Texas were extraordinarily cold. Dallas dropped to minus 10, Austin fell to minus 5, Galveston reached 8, Houston fell to 6, Longview fell to minus 7, but Tulia, TX was the coldest at minus 21 degrees.  The cold was so widespread that the northern Mississippi River froze solid and when a thaw ensued, ice was seen flowing past New Orleans.

Locally, the newly-arrived Dutch immigrants from Nederland were seen ice skating on the Sabine Pass channel. Plus, speckled trout, stunned by the cold, were being shoveled into wagons at McFaddin Beach.