When will Tropical Storm Barry turn to Louisiana?

A lot depends on how long the ridge of high pressure stays strong and how soon that 'weakness' is felt. 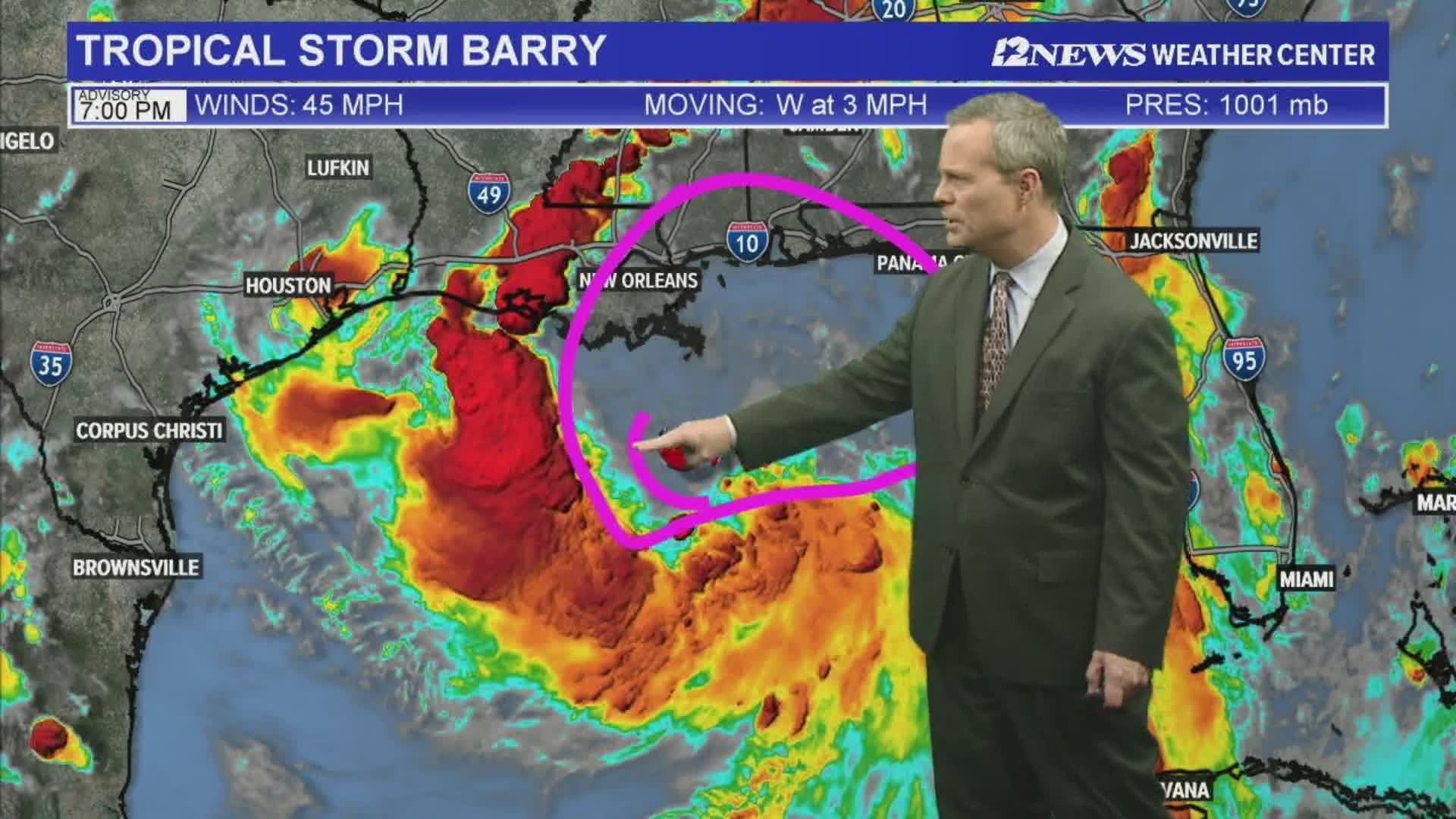 NEW ORLEANS — Where will Tropical Storm Barry make landfall and what will steer it? Those are the big questions because even slight differences in its track will determine where the strongest impacts happen.

Right now, Tropical Storm Barry is being steered by a mid-level ridge of high pressure to the north. The clockwise flow around the high pressure is keeping it on a slow westward track for now.

By Friday and Saturday, a 'weakness' in the ridge is forecast to develop. That would be because of a trough of low pressure moving across the Midwest. This would draw the system northwestward and eventually northward, while the high pressure would become less dominant.

A lot depends on how long the ridge of high pressure stays strong and how soon that 'weakness' is felt. If the ridge stays strong longer, that would keep the system moving west farther toward the Texas coast. If the 'weakness' is felt sooner, that would allow the northward turn to happen sooner - some models even have this happening almost immediately along the Mississippi/Alabama coast.

As of 10 p.m. Thursday, Tropical Storm Barry has strengthened slightly with winds of 50 mph, although these are not at the center of circulation, which remains very broad.

Pressure is the same and motion is nearly stationary; to the west at 3 mph. Dry air over the center and strong northerly wind shear are preventing thunderstorms from developing around Barry’s center and also preventing the circulation from becoming more tightly wound.

It’s possible that Barry will remain very lop-sided up to landfall. Models continue to steadily strengthen and organize Barry prior to landfall, that just is not happening at the moment.

The Euro model seems to be the best at initializing, with the thunderstorms currently in the southern half of the storm. The Euro doesn’t bring the heaviest rain to the eastern side of Barry until just after landfall. At that point, the heaviest rain would be from Baton Rouge, westward.

The Euro predicts 3-6” of rain over the weekend for our viewing area, with 10+ west of us. All eyes will be on when, if at all, Barry begins a turn toward the north. If soon, we are more under the heaviest rain threat. If later, like the Euro says, the heaviest rain stays farther west. Flooding is still our greatest concern at this time.

Download the FREE WWL-TV News app now in the iTunes store or on Google Play.

Right now, the model spread is large from the Texas coast to the Mississippi coast, so the best guess is somewhere in the middle. That's why the National Hurricane Center has the path toward central Louisiana.

And a final big question: will Tropical Storm Barry stall? We are now seeing a couple of models show some slowing near the coast. That can happen with tropical systems that are making landfall without a really forceful steering mechanism, so we'll have to see if future model runs show that.

Whether it stalls or not, it is expected to be slow-moving and its heavy rains could linger close to us from Friday through early Sunday. The potential for prolonged heavy rain during that timeframe still looks like the biggest concern with Barry.

RELATED: 'We are at risk of significant flooding' - Tropical Storm Barry bears down on Louisiana

Stay with Eyewitness News on WWL-TV and WWLTV.com for more on this developing story.