Hurricane Iota roars onto Nicaragua as 2nd blow in 2 weeks 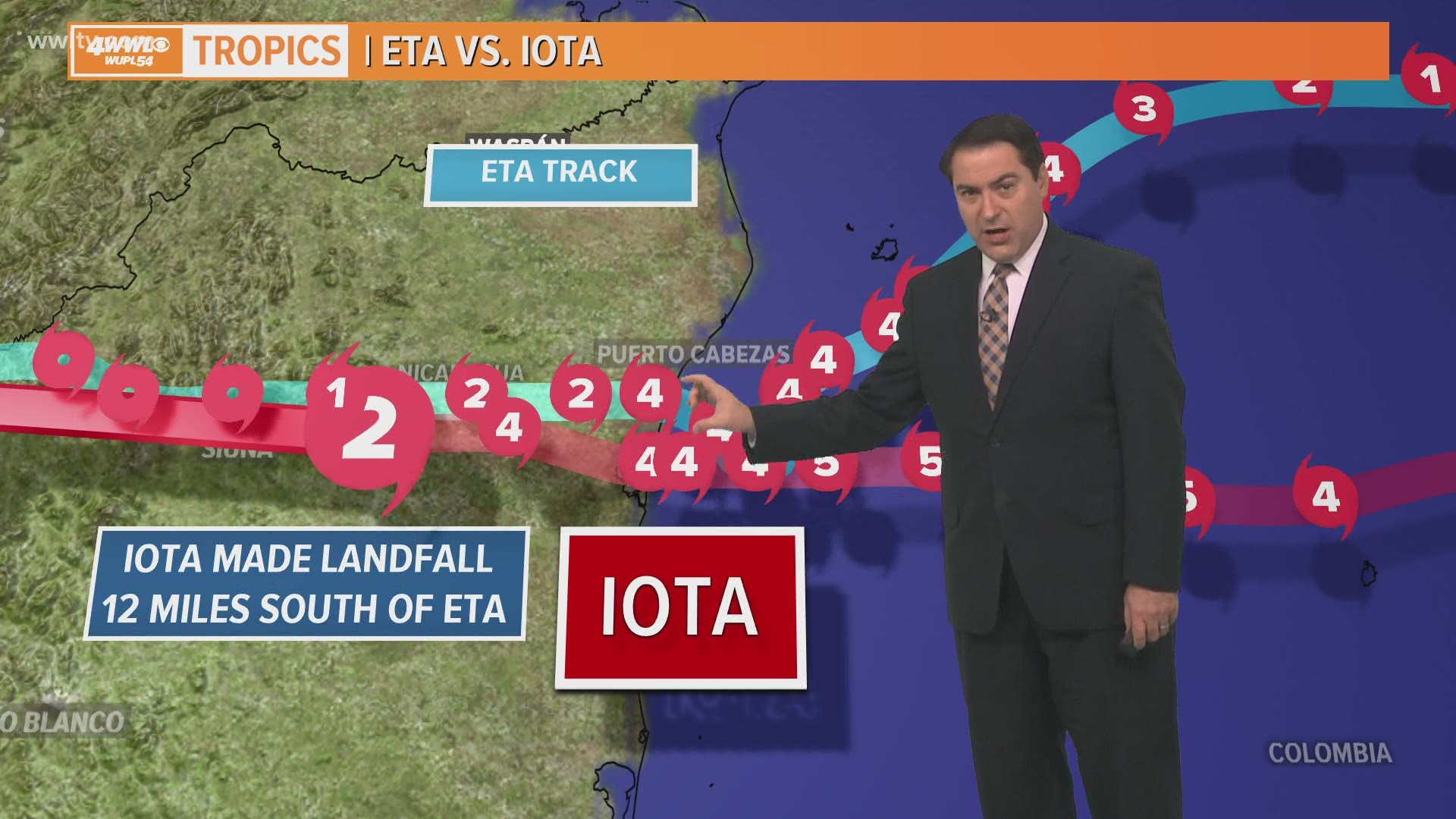 MANAGUA, Nicaragua — In a one-two punch, Hurricane Iota roared ashore along almost exactly the same stretch of Nicaragua's Caribbean coast recently devastated by an equally powerful hurricane and then weakened as it tore across the northern part of the country.

Iota had intensified into an extremely dangerous Category 5 storm during the day Monday, but the U.S. National Hurricane Center said it weakened as it neared the coast late Monday and made landfall with maximum sustained winds of 155 mph (250 kph). It hit the coast about 30 miles (45 kilometers) south of the Nicaraguan city of Puerto Cabezas, also known as Bilwi.

More than 40,000 people were in shelters. He said one hotel in Bilwi had lost its entire roof.

As the storm moved westward, the concern became flooding. The Tola river had topped its banks and western Nicaragua, along the Pacific coast were forecast to receive the most rain. Nicaragua’s meteorology director Marcio Baca said that area was forecast to receive six to seven inches of rain and soils were already highly saturated.

People had hunkered down in Bilwi even before the hurricane arrived, already battered by screeching winds and torrential rains.

Business owner Adán Artola Schultz braced himself in the doorway of his house as strong gusts of wind and rain drover water in torrents down the street.

“It is like bullets,” he said of the sound of metal structures banging and buckling in the wind. “This is double destruction,” he said, referring to the damages wrought by Hurricane Eta just two weeks earlier. “This is coming in with fury,” said Artola Schultz.

“The situation is exacerbated by the fact that Iota is making landfall in almost the exact same location that category 4 Hurricane Eta did a little less than two weeks ago,” the Hurricane Center said in a statement.

Eta killed more than 130 people in the region as torrential rains caused flash floods and mudslides in parts of Central America and Mexico.

“This hurricane is definitely worse” than Eta, Jason Bermúdez, a university student from Bilwi, said as winds roared before Iota came ashore. “There are already a lot of houses that lost their roofs, fences and fruit trees that got knocked down,” said Bermúdez. “We will never forget this year.”

He said the primary concerns for people trying to survive after Eta were drinking water and shelter.

Eta left no structure in the coastal community of Wawa Bar untouched. “We can’t talk about partial damage, but rather total,” he said.

Many families depend on captured rain, but Eta destroyed their systems catching and piping the rainwater. Those who had wells have seen them contaminated by seawater and sewage from primitive latrines. Families had tried to repair their roofs after Eta, even in a temporary way, to escape the regular tropical rains, but Iota would finish with all of that, he said.

Crops were largely destroyed by Eta and fisherman, who make their living by the sea, were still trying to repair and retrieve their boats from wherever Eta had pushed them.

Iota now moves toward Honduras, a country still reeling from Eta with tens of thousands homeless.

Following Eta, Honduras had reported 74 deaths and nearly 57,000 people in shelters, mostly in the north.

One of the hardest hit areas was La Lima, a San Pedro Sula suburb, that flooded when the Chamelecon river topped its banks. Many who had their homes flooded moved to shelters or in with relatives. Some stayed behind in an attempt to protect what few possessions remained. Authorities tried to force most of them to move to shelters ahead of Iota’s arrival.

On Monday, Wendy Guadalupe Contreras Paz, 34, was living under a tarp with her four children and seven other relatives along a main boulevard in La Lima.

“I lost everything, I couldn’t take anything,” Contreras said. “But my mom and my grandmother have some things and that’s why we’re living here, to be closer to the house and keep them from stealing the few little things they have left.”

Iota is the record 30th named storm of this year’s extraordinarily busy Atlantic hurricane season. It’s also the ninth storm to rapidly intensify this season, a dangerous phenomenon that is happening increasingly more often. Such activity has focused attention on climate change, which scientists say is causing wetter, stronger and more destructive storms.

The official end of the hurricane season is Nov. 30.