CAUTION: Contract work scammers seeking victims after Harvey, what to do to protect yourself

With tens of thousands of people rebuilding, shoddy contractors are out stalking victims, and while many people lost their homes to the intense floods, thousands are in a threat to being victims of scams. 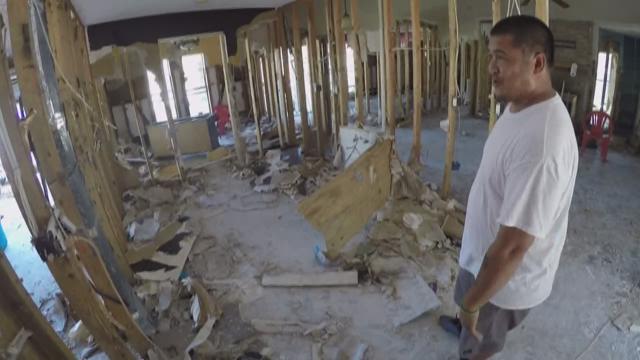 With tens of thousands of people rebuilding, shoddy contractors are out stalking victims, and while many people lost their homes to the intense floods, thousands are in a threat to being victims of scams.

"You don't want to scam people, they just lost everything so why go through that trouble," says David George, who lost his home to flood waters in Bevil Oaks area of Jefferson County.

His home was left in ruins with debris and nothing but frame walls.

"It's a process since we're waiting for FEMA," George says.

"We haven't heard from them at all," He explains.

Now he's being careful because there are people out there who take advantage of victims through scams.

"Not being from here scares me because I don't know who to talk to or what road to go through," George says.

"You just basically follow the people around the neighborhood and start from there," he explains.

That's why the Better Business Bureau says it's important to be cautious.

Here's how, verify permits before handing out your money, get at least 3 to 4 quotes from contractors, and insist that payments are made to companies instead of individuals.

It is also important to get a written contract specifying the price, work to be done, time frame, and their current certificate of insurance.

"Some of the neighbors tell you to be aware of bad contract workers, so you just follow," he says.

Now he's taking note of this advice as he hopes for a fast recovery.

"I'm going to start calling contractors to look at what we've got, then go from there," George says.

"We're going to build back strong," he explains.

Despite being broken down like the walls of his home, George tells us that the last thing he wants is to lose the little money he has left after the storm to a scammer.

Your BBB offers the following tips for storm victims:

Few tips to protect you from being next: https://t.co/RiVUCa8BV6 pic.twitter.com/tFsSdN000R