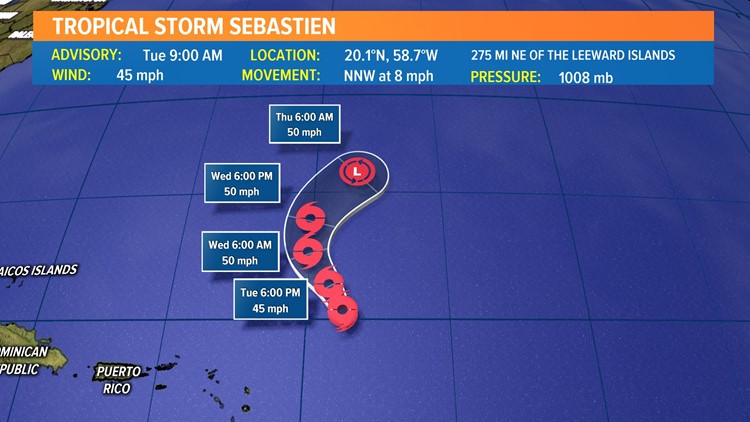 Tropical Storm Sebastien formed in the Atlantic on Tuesday.

Sebastien is 225 miles northeast of the Leeward Islands and is moving NNW at 8 mph.

The National Hurricane Center believes Tropical Storm Sebastien will stay a tropical storm a few days as it tracks out into the open Atlantic Ocean.

The good news is the NHC believes Sebastien will not be a threat to land and will stay over the open waters of the Atlantic.

"The low is forecast to interact with a frontal system by midweek and further development is unlikely after that time," the National Hurricane Center said.

With Thanksgiving just over a week away, it may sound unusual to be talking about the tropics. But tropical development in late November is not unusual.

Since 1950, 24 tropical or subtropical storms have developed in the Atlantic from Nov. 19 through New Year's Eve, according to NOAA.

Of those storms, only one made it into the Gulf of Mexico.

During the devastating 2005 hurricane season -- which brought Katrina and Rita to the Gulf Coast -- there were three named storms that formed after Nov. 18.

On Thanksgiving 2016, Hurricane Otto made landfall in Nicaragua as a strong category three hurricane. It was the last named storm to develop in the Atlantic in November.

The tropics were also very active at the end of October. We saw Melissa, Nestor, Olga, Pablo and Rebekah form in the Atlantic.

Tanya would be the next named storm if one was to form.

RELATED: The New Normal: Stories from the Storm