The bus was traveling east on Highway 90 when it was rear-ended by a Honda minivan. 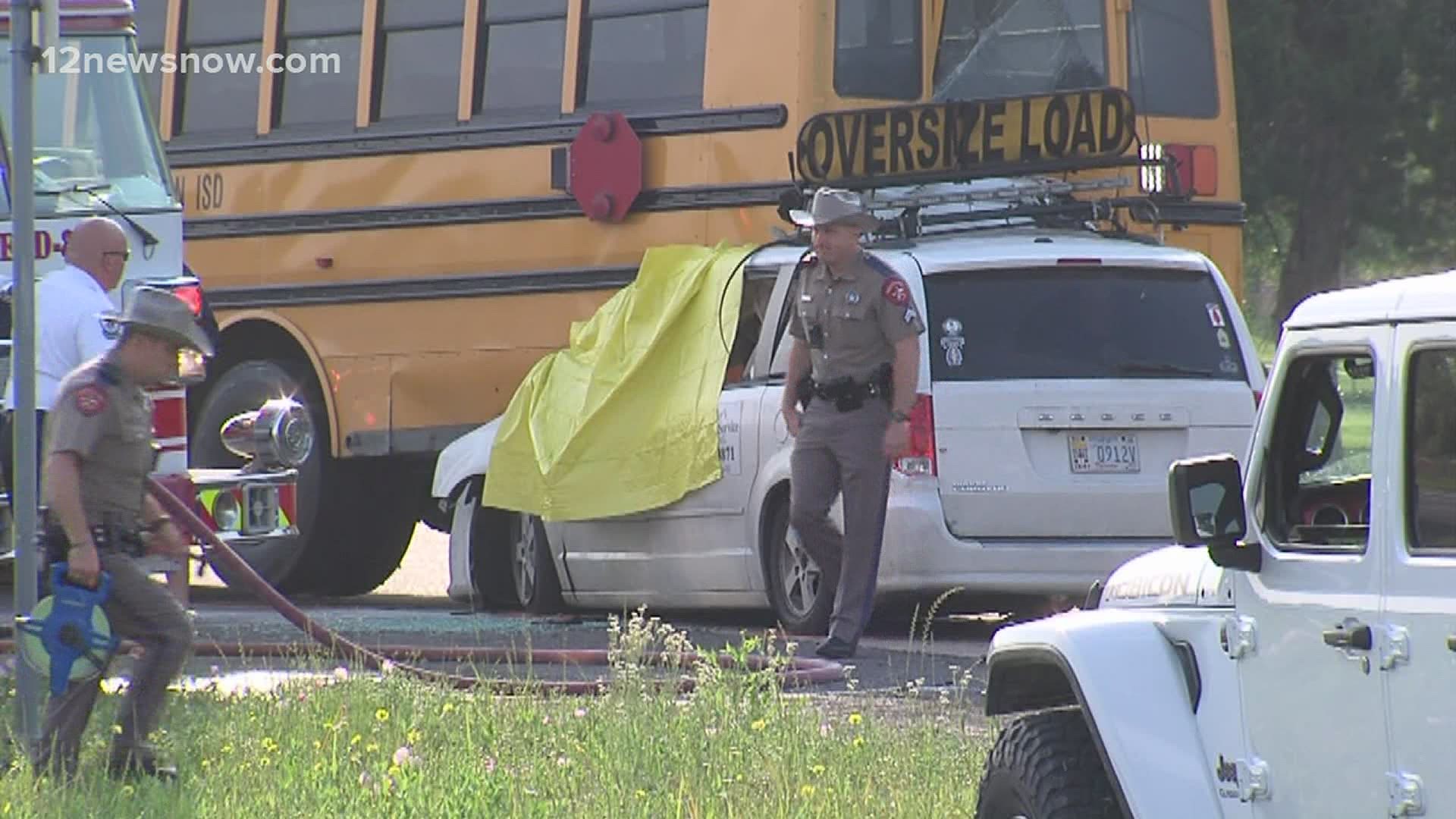 JEFFERSON COUNTY, Texas — A 56-year-old driver from Mississippi is dead but no students are injured following a wreck involving a school bus and a minivan along U.S. Highway 90 west of China Monday morning.

The wreck involved a Hardin-Jefferson bus and a minivan which struck the rear of the bus for an unknown reason just west of China near McDermand Road according to the Texas Department of Public Safety.

David Eugene Strickler, 56, of Biloxi, Mississippi, was pronounced dead at the scene of the wreck according to troopers.

Troopers, firefighters and medic responded to the fatal wreck in the eastbound lanes of the highway at about 7:15 a.m Monday morning.

The bus was traveling east on Highway 90 when it was rear-ended by a Dodge minivan according to Texas DPS trooper Lt. Chuck Havard.

None of the 11 students aboard the bus were injured according to a news release from the Texas Department of Public Safety.

Strickler, the driver of the Dodge minivan, was pronounced deceased by Jefferson County Precinct Seven Justice of the Peace Brad Burnett at the crash scene.

A tarp covered the driver's side of the Honda minivan which was wedged beneath the back left side of the bus.

An "oversized load" banner often used by vehicles escorting 18-wheelers with oversized and wide loads was visible was visible atop the minivan.

It is unclear at this time if the minivan was actively escorting an oversized load at the time of the wreck.

The school bus driver was taken by ambulance to Baptist Hospital in Beaumont Havard said.

From a Texas Department of Public Safety news release...

At approximately 7:15 a.m., the Texas Department of Public Safety (DPS) Troopers responded to a multiple vehicle crash on US 90 in Jefferson County.  The crash occurred near McDermitt Road and involved a Hardin-Jefferson Independent School District school bus.

The preliminary DPS crash investigation indicates that the school bus was traveling eastbound on US 90 followed by Dodge minivan.  The driver of the school bus slowed to make a right turn onto McDermitt Road when it was rear-ended by the Dodge

The driver of the Dodge minivan was pronounced deceased by Justice of the Peace Burnett at the crash scene.  At this time, the driver remains entrapped inside the vehicle.

The driver of the school bus was transported to a local hospital with minor injuries.

At the time of the crash, there were eleven (11) students on the school bus.  After being medically evaluated at the scene, all students were transferred to another school bus and safely transported to school.

All information is preliminary as Troopers work to determine the exact factors that contributed to this fatal crash.