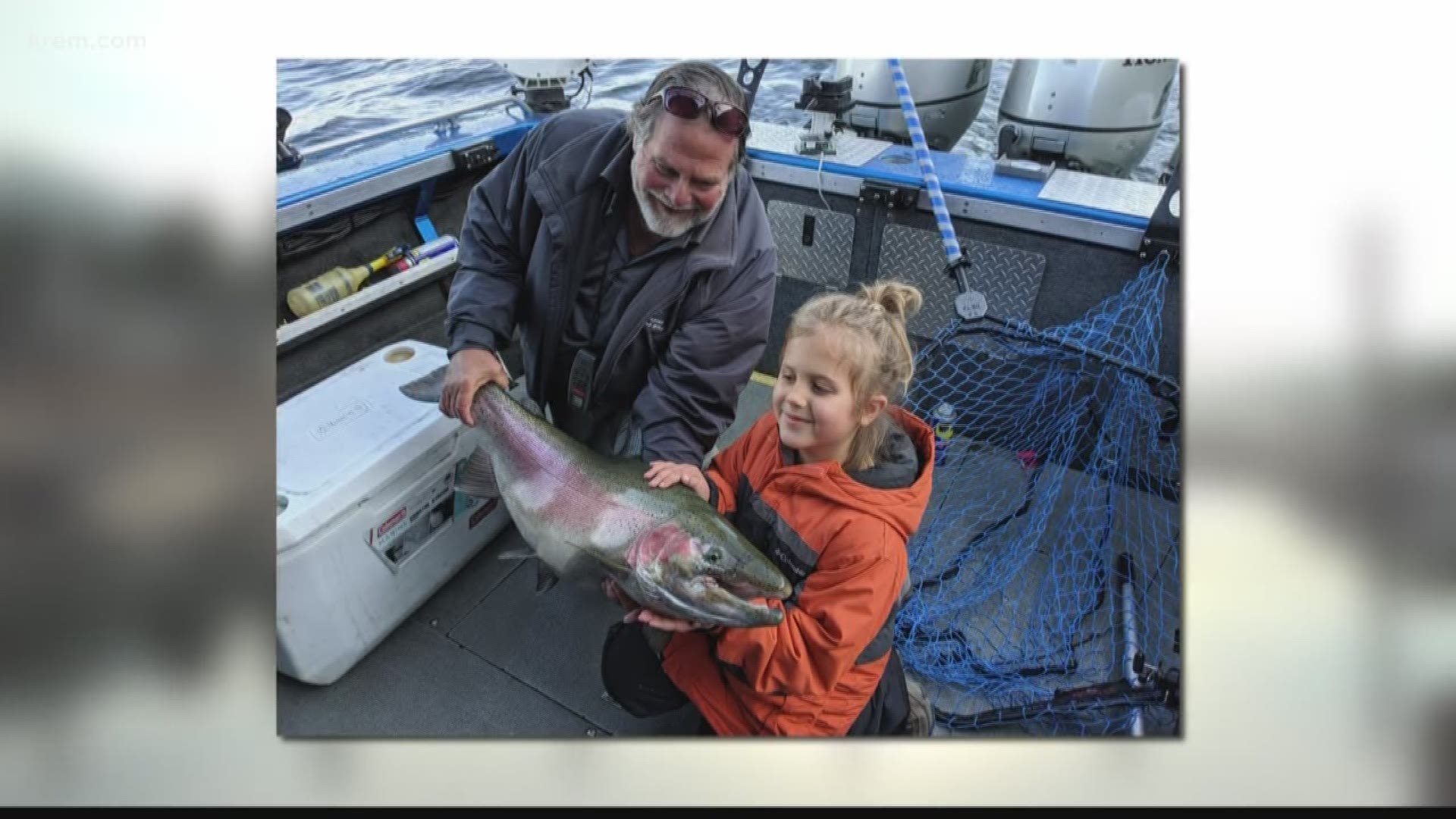 SANDPOINT, Idaho — An 8-year-old girl from Sandpoint accomplished a feat that would be impressive for even the most experienced angler. Sophie Egizi set a new catch-and-release record for Gerrard rainbow trout in Idaho.

Egizi caught the 36.5-inch beast while fishing on Lake Pend Oreille on Oct. 11. Idaho Fish and Game announced the record in early November.

Lake Pend Oreille also holds the certified weight record of 37 pounds for Gerrard rainbow trout set in 1947. Another man recently set a new catch-and-release record of 29 inches for bull trout while fishing on the lake.

Idaho Fish and Game says Gerrard rainbow trout are unique to the Clark Fork River drainage and have long been handled as a separate trout record species due to their notorious size.

A fish that large isn't easy to catch. Sophie said her hands were cramping as she spent 30 minutes reeling it in.

"Wow, he was a fighter," her dad replied.

It's clear that Sophie's dad is one proud pop.

To top it all off, Sophie chose a name for her record fish: Old Man Sparkles.

"Becuase it looked like he had sparkles on him and it was a funny name," she explained.

Photos: Sophie fishing through the years

Sophie’s dad Bob Egizi reached out to KREM in November to share more of his daughter’s story.

The family says fishing has been Sophie's passion since she was “a tiny little nugget."

"I like the fight of it...and identifying the species of it," Sophie told KREM.

This isn't the first that she has caught a gargantuan fish. When she was just four years old, Sophie nabbed a 15-pound black drum while on a fishing trip with her dad and one of his friends.

"It [fishing] was just natural. We never had to force her to go," Bob Egizi said.

Sophie told her parents that she would catch a record fish ever since and she made her dream a reality.

“Fast forward to Oct. 11 and as we're walking out of the house, way earlier than Sophie ever wakes up, she's all smiles and smack talk with, ‘…I'm catching a record fish today!!' We laughed at her... Now she's laughing at us,” Sophie’s mom Jessi wrote on Facebook.

Captain Bob Wiley, who joined Sophie on the fishing trip of a lifetime, has been fishing Lake Pend Oreille for years.

"I was waiting for that special fish, that special moment," he said. "She stepped on the boat and said, 'Captain Bob, you're going to get me a record today. I said, 'Oh Lord, that's a high mark.'"

Sophie loves animals and nature, her dad said. Her parents say that they believe she will pursue a career as a veterinarian, biologist or environmental activist.

“She picks up trash when she sees it and every year for her birthday she does random acts of kindness, the amount equal to her age,” her dad wrote to KREM.

Bob Egizi said the family recently moved to Sandpoint from Fort Myers, Florida, adding that Lake Pend Oreille was one of many reasons the family decided to pack their bags and head for Idaho.

“It was a gamble but it was worth every penny. Sophie’s record is just icing on the cake,” he wrote to KREM.