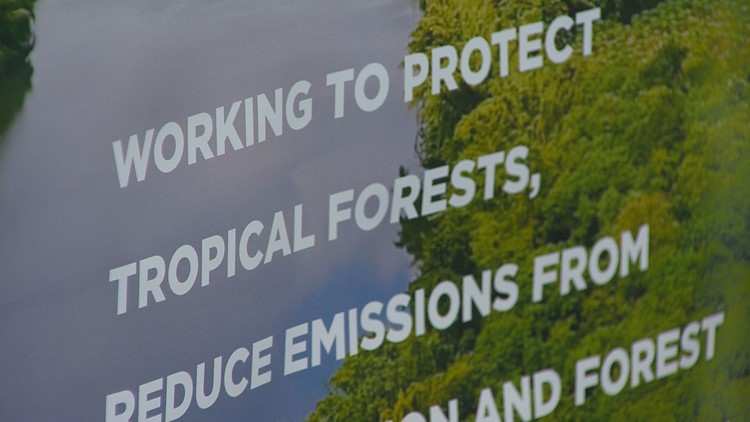 DENVER — At a building on the University of Colorado (CU) campus in Boulder, two people are paying close attention to everything that is happening more than 4,000 miles away in the Amazon Rain forest.

"State of Amazonas is under a state of emergency," said Colleen Scanlan-Lyons to her colleague after receiving a text from the Amazon.

Scanlan-Lyons is the Project Director for the Governors’ Climate and Forests Task Force, (GCF) an organization whose mission is to "protect tropical forests, reduce emissions from deforestation and forest degradation, and promote realistic pathways to forest-maintaining rural development."

They collaborate with states around the world and are paying extra close attention to Brazil as their Amazon forest burns at a record rate.

"So I think it’s important to understand that a lot of these fires have been deliberately set to clear the forest," said William Boyd, the founding director of GCF. "So basically people are burning the Amazon illegally so they can clear the forest for pasture or crops."

RELATED: Smoke from Amazon rainforest fires can be seen from space

According to Brazil's Space Research Agency, who is monitoring the fire by satellite, the fires are burning at more than an 80% increase compared to last year.

They say as of Monday, they have detected 74,155 fires since the beginning of the year.

"A lot of that progress now that we’ve seen over the last 10 years or so is being reversed under the current president, President Bolsinaro," said Boyd.

Boyd and Scanlan-Lyons have hope combating climate change by working with Brazilian governors and servants.

But hope can also be found in the people that start caring from thousands of miles away.

"It’s safe to say if we lose the Amazon we face ecological collapse," said Boyd, who added at the Amazon is responsible for 20% of the world's oxygen source.

One of the ways he says Coloradans can help is by being aware of the major drivers of deforestation in the Amazon.

The major crops that farmers have cleared forests for include beef, soy, and palm oil.

"There’s a lot you can do as a consumer to become aware of the connections that you have and the choices to make," said Boyd.