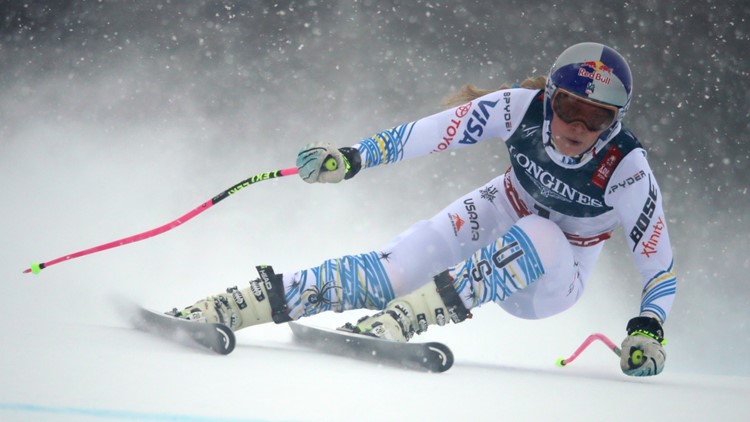 Photo by: AP Photo/Alessandro Trovati
United States' Lindsey Vonn speeds down the course during the downhill portion of the women's combined, at the alpine ski World Championships in Are, Sweden, Friday, Feb. 8, 2019.

ARE, Sweden (AP) — The Latest from the skiing world championships (all times local):

Lindsey Vonn is struggling with a rib problem.

After completing the downhill portion of the combined as a training run, Vonn says, "I'm a little stiff still. I actually feel pretty decent. It's just that my upper rib kind of went out when I was at the start so that's been kind of giving me a hard time."

Vonn says the rib problem affects "moving, in general," adding, "I've had rib problems in the past. It's not a new thing for me but I can fix it before I have to ski."

Vonn, who will retire after Sunday's downhill race, also has a black eye from crashing in the super-G on Tuesday.

Still, she says she'll be aiming to win on Sunday: "Whether I'm ready or not I'm just going to go full throttle."

Ramona Siebenhofer held a slim lead after the downhill portion of the Alpine combined at the world championships, with favorite Wendy Holdener and Petra Vlhova in good positions going into the slalom leg.

Holdener, the defending champion, was 0.42 seconds off the lead in fifth place and Vlhova a further 0.30 seconds behind in a tie for eighth. They are both strong in the slalom.

Siebenhofer, an Austria who won back-to-back World Cup downhills in Cortina last month, was 0.01 ahead of world downhill champion Ilka Stuhec. Ragnhild Mowinckel was 0.06 seconds off the lead in third place.

Despite being in first place, Siebenhofer is not expected to be in medal contention after the slalom leg, which is scheduled to start at 4:15 p.m. (1515 GMT).

Corinne Suter, who was third in the super-G on Tuesday, was in fourth place, 0.34 seconds behind.

It was snowing for the racers in the downhill run.

There were no hitches for Lindsey Vonn this time.

Three days after her crash in the super-G, Vonn completed the downhill portion of the Alpine combined race at the world championships. She was using it as a training run for the final race of her career — the downhill on Sunday — so will sit out the slalom leg of the combined.

The American, racing with a shiner under her right eye, smiled and raised her pole to the fans after crossing the line.

Lindsey Vonn is using Friday's Alpine combined race at the world championships as a training run for the final race of her career.

Vonn will test the course in the downhill portion then sit out the slalom leg as she prepares for Sunday's downhill race, after which she will retire.

Vonn has not been on the race course since she crashed on Tuesday in the super-G, leaving her with a shiner under her right eye.

With Mikaela Shiffrin sitting out, Swiss racer Wendy Holdener is the favorite to defend her title from the 2017 worlds.

The winner of the combined is determined by adding the times from one high-speed downhill run and one shorter slalom leg.