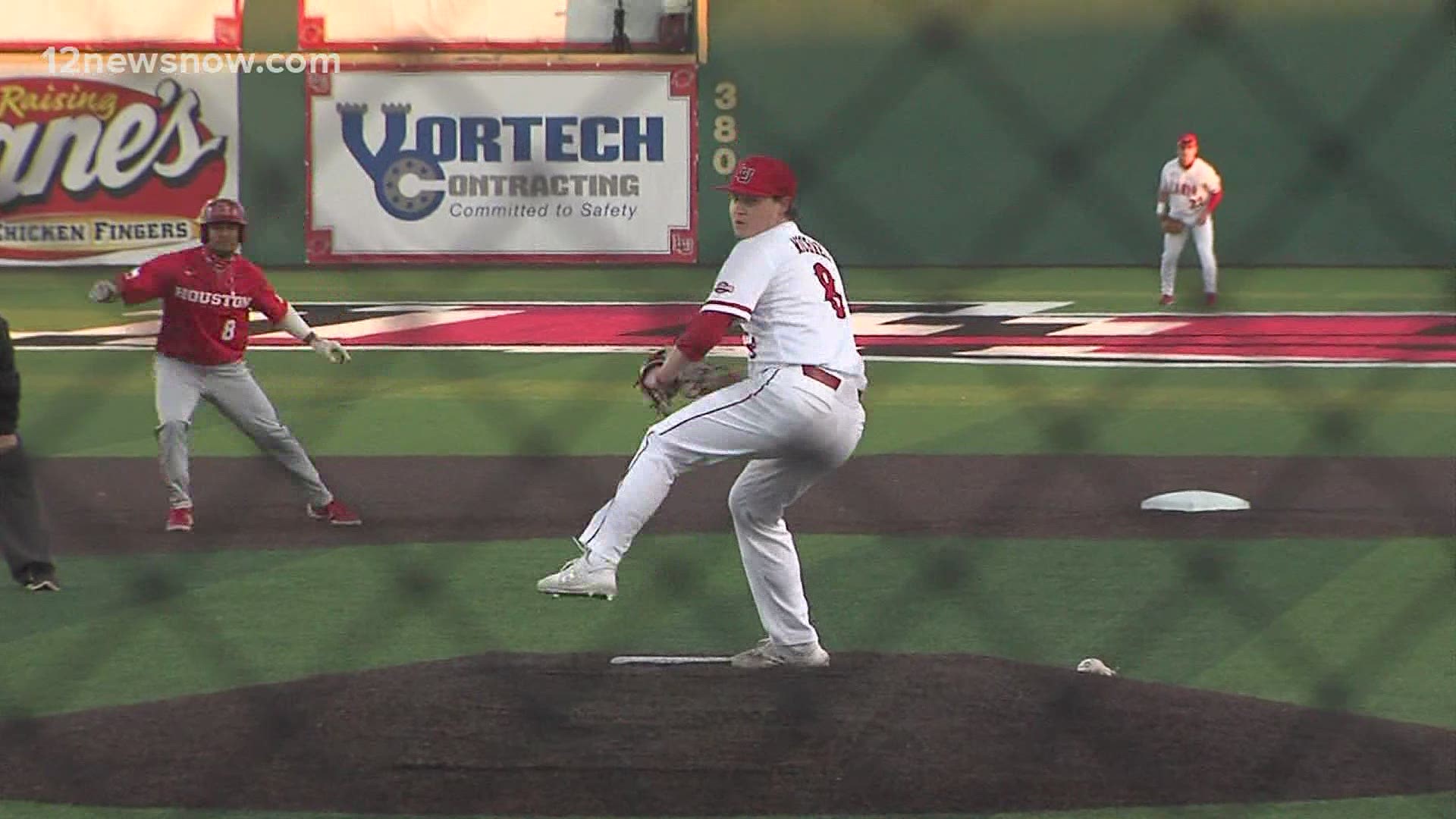 BEAUMONT, Texas — Junior Trevin Michael threw five scoreless innings, and although he wasn’t involved in the decision, he set the tone for a staff that shut out the nation’s leader in home runs – Houston – Wednesday evening. Lamar University used a two-run eighth (all with two outs) to the open the season with a 2-0 victory over the Cougars at Vincent-Beck Stadium.

LU’s pitching staff struck out 11 on the night without surrendering a walk, and giving up just five hits.

“That’s the nation’s leading home run offense, and Trevin really slowed them down tonight,” said LU head coach Will Davis. “Any time you can go nine innings and not give up any free bases, you’re probably going to win a lot of those games. I think it’s even more remarkable knowing we haven’t played in the last 357 days.”

Houston ran four pitchers to the bump and was equally effective. Matt Lazzaro got the start and pitched two innings, before giving way to Sean Bretz who pitched a scoreless third. The Cougars’ Cameron Prayer shut LU down for 4.2 inning striking out seven, but he was lifted with two outs and no one on and that is when the game changed.

After two strike outs to start the inning, Avery George faced Jaycob Deese. The Humble, Texas native got a seeing-eye single right back up the middle and advanced to third on an errant throw by the catcher when he was attempting to steal second (there was no steal as Girouard walked). Nederland native, Chase Kemp, broke the scoreless tie with a single to right field. Senior Anthony Quirion followed up Kemp with a single to left driving in Girouard for the second run. LU loaded the bases before Houston was able to escape further damage.

Davis turned the ball over to Dallas who closed out the ninth. After the first batter reached on a single to right field, Dallas struck out the next two and then got Tyler Bielamowicz to ground out to second to secure the win.

The Cardinals’ defense was perfect Wednesday robbing UH of several sure hits, including two extra-base hit saving catches in the eighth inning. With one out, Ian McMillan torched a pitch in the gap in right center only to watch Girouard make a diving stab at the ball for the out. Moments later, George did the very same thing down the right field line to close out the inning.

“We recruit the fast centerfield types for all of our outfield positions, for the most part, for that very reason,” said Davis. “I don’t like the ball touching the ground. The difference between them making the catches or not is either an out and the inning is over or a triple. If there are runners on base, those catches are wiping runners off the board.”

Big Red will be right back in action Friday when it opens a three-game set against Stephen F. Austin in non-conference action. The first game of the series will begin at 6 p.m. from Vincent-Beck Stadium.