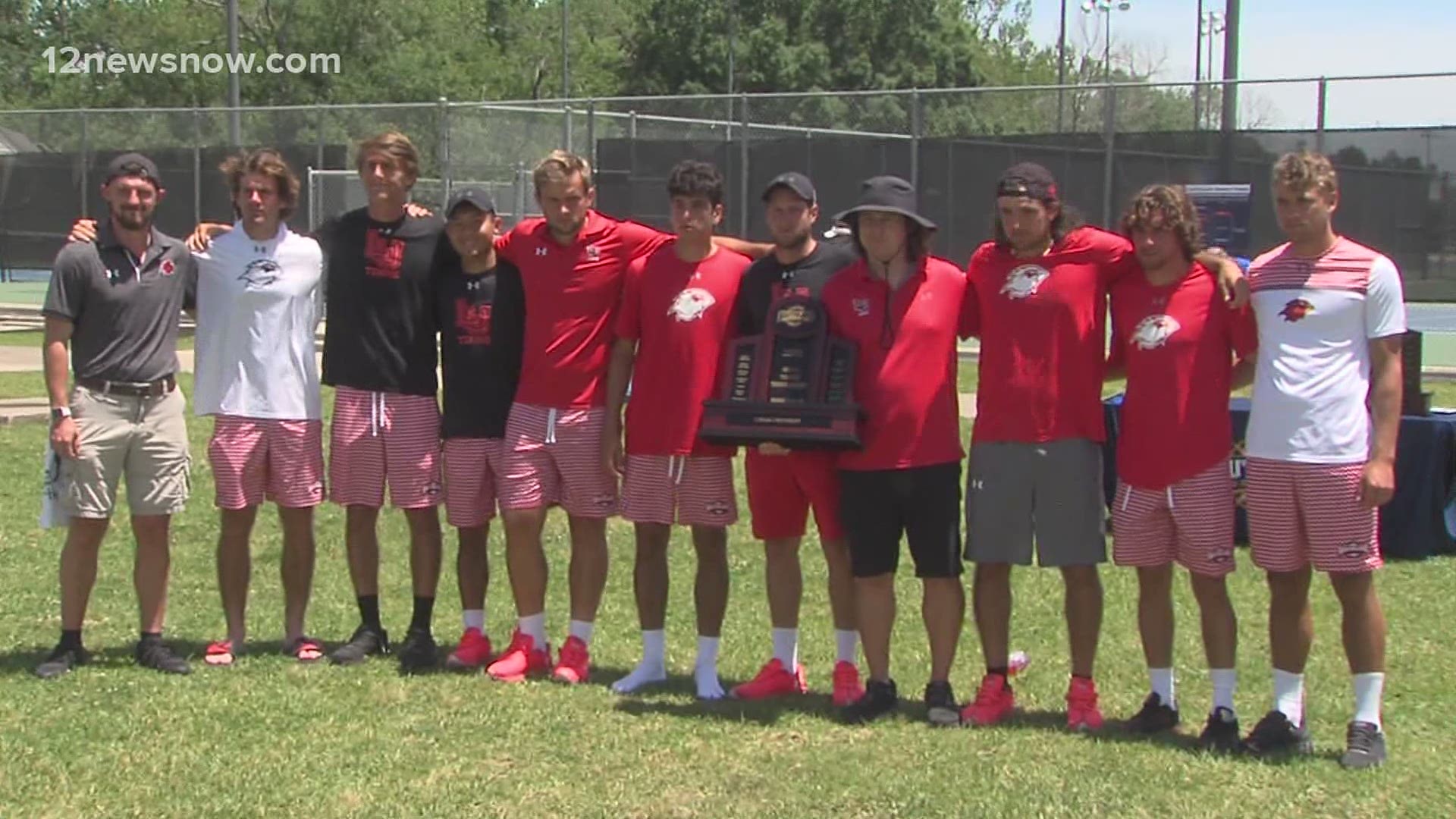 In what has become a common theme at the Southland Conference Tennis Championships, Lamar University faced Texas A&M-Corpus Christi Monday morning for the right to represent the league at the 2021 NCAA Championships. Unfortunately for the Red and White the Islanders walked away with a 4-1 victory at the Beaumont Municipal Tennis Center Monday.

"This was a good match from the intensity and the amount of emotion on both sides of the court," said LU head coach Scott Shankles. "We fell just short today in doubles, and then in singles we just couldn't seem to get the first-set edge against them. In the end, they were able to close matches out when they needed to. That was the big difference in the match.

"I'm really proud of my guys today. They fought hard. End of the day, you have to tip your cap to Coach Moore. They have a very talented team, and they came ready to play," added Shankles.

A&M-Corpus Christi took the doubles point after picking up wins on Nos. 2 and 3 doubles, which placed the Cardinals in a position of battling from behind the rest of the afternoon. Big Red got the first victory of the day when the first-team all-conference duo Axel Vila Antuna and Nicolas Mayr recorded a 6-2 decision over the Islanders' Kyohei Yamanaka and Ryuya Ata, but LU came up just short on the other two courts.

The Islanders made it a 3-0 lead with victories at Nos. 6 and 4 singles, respectively, but the Cardinals never quit battling. LU got on the scoreboard at No. 2 singles when junior Nicolas Mayr defeated the Islanders' Ryuya Ata, 6-4, 6-3.

With Mayr's victory at the No. 2 position, LU appeared to be in good position to rattle off consecutive wins with Vila Antuna on court one. Up a set and leading in the second, LU was poised to trim the deficit to one before Yamanaka rallied to force the second set into a tiebreak and eventually a third set.

With court one going to a third, the Islanders seized the opportunity. A&M-Corpus Christi's Nathan Schwartz picked up the deciding point with his victory at No. 3 singles.

The loss ended the Cardinals season at 11-9 (.550), and LU closed out their final season in Southland Conference just missing out on the regular-season title as the No. 2 seed.

Lamar University's run through the Southland Conference Championships came to a heartbreaking end Monday afternoon against fourth-seeded Texas A&M-Corpus Christi. The Islanders topped LU, 4-0, at the Beaumont Municipal Tennis Complex to advance to the NCAA Championships.

"I could not be prouder of this team," said LU head coach David Wong. "I don't think there is anything more that anyone could've asked of these young ladies. No matter the situation, they just continued to fight. Not to take anything way from Texas A&M-Corpus Christi, because they have a very talented team and deserved to win, but I think we simply ran out of gas today.

"I simply don't have the words to accurately express the effort this team put fourth this week. I'm sorry for them that it had to end," added Wong.

It was a tough situation for the Cardinals as they entered the day having played two long, physically and emotionally draining matches that came down to the wire. Both of LU previous matches lasted a minimum of four hours each, while Texas A&M-Corpus Christi entered the day with two matches that totaled barely four hours combined.

The Islanders took the opening lead of the match with victories at the Nos. 2 and 3 doubles positions. A&M-Corpus Christi held the momentum in singles and then picked up first-set wins on all six courts. The first match to finish came at No. 2 singles as A&M-Corpus Christi's Camille Townsend defeated Elena Rodriguez, 6-0, 6-4, to give the Islanders a 2-0 advantage.

Senior Bianca Vitale was down a set on court No. 1 but battled back to take a 3-2 lead in the second. Unfortunately, Vitale would not have the opportunity to finish her match as the Islanders closed out the tournament with consecutive wins on courts 3 and 4 for the final score.