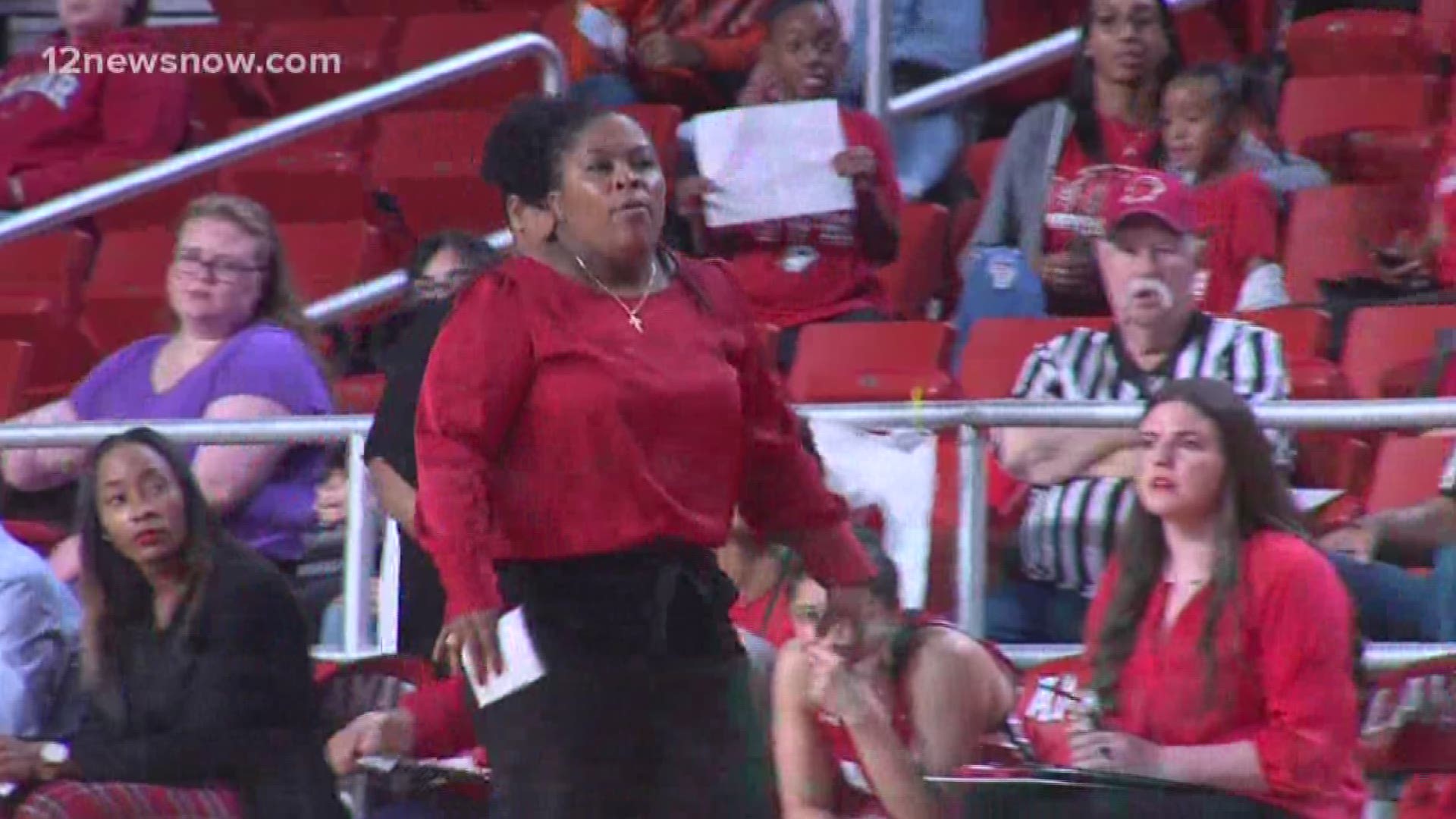 BEAUMONT, Texas — After trailing by four to open the game, a shutdown defensive effort carried Lamar University women's basketball to a big win over LeTourneau University on Monday, 90-38. The Cardinals (3-5) outscored the Yellowjackets 88-32 in the final 35 minutes of the game while forcing 36 turnovers.

"We wanted to come out and play really hard, and I'm excited that [Jadyn Pimentel] has found her game again offensively," said head coach Aqua Franklin. "Collectively I thought we did an unbelievable job defensively, holding the Yellowjackets to 11 points in the second half. Hopefully that carries over the rest of this season."

Jadyn Pimentel had her second consecutive game of 20 points with 22 on a 9-of-19 performance from the field, pulling down three boards and snagging three steals as well while dealing out four assists. Shedricka Pierson set a new career best with 13 points on 50 percent shooting from three and six steals, and Amber Vidal also totaled 13 while stealing four passes. Briana Laidler fell one point shy of a double-double with nine points and 10 rebounds, and Umaja Collins had eight points and five boards.

Lamar struck first with a layup from Mitchell, but six free throws in the first five minutes gave LeTourneau an 8-4 lead at the first media stoppage. Umaja Collins sank the front end of a pair of free throws to cut it down to three, and the back end of a free throw from Ashlan Miles shrank it to two points, 8-6, with 3:34 to go. Hastings tied the game up on free throws, and Pierson hit the first of her threes on the night to put LU back out front, 11-10. A steal and layup by Pierson a few seconds later stretched that lead to three, but the Yellowjackets outscored the Cards 6-2 in the final minute to lead 16-15 at the end of the quarter.

Pierson nailed a three with 9:30 remaining on the second quarter clock to give LU an 18-16 advantage that was answered on the other end, but Pimentel put Lamar ahead for good in the next possession. She danced across half court and used a nifty move to send the LeTourneau defender sprawling, and then sank the easy, open jumper. Lamar would outscore the Yellowjackets 24-9 the rest of the period including a three minute scoreless stretch and an eight minute gap between field goals for LETU. At the half Lamar led LeTourneau 44-27. Pierson had 10 points at the half on 50 percent shooting from three and also had three steals and two boards. Pimentel had nine more for LU with two boards, a steal, and an assist. Big Red outshot LeTourneau 41 percent to 34.8 percent in the half with a 23-18 rebounding edge, and led by as much as 19.

A steal and a transition layup for Pimentel opened the second half, and Vidal answered in kind with another picked pocket and two free throws. LU's third basket of the quarter also came on a steal and a fast break bucket, this time with Pierson earning the steal and Pimentel scoring the basket. Lamar's first eight points all came off turnovers, and LeTourneau finally scored its first basket of the half with 7:30 to go. All told Lamar forced 14 Yellowjacket turnovers and outscored LeTourneau 31-5 in the period, ending the quarter with a 14-0 run in the final 4:47.

Lamar's offensive output slowed down slightly in the fourth, but the Cards' defense was still locked in, forcing more turnovers and allowing just 25 percent shooting while LeTourneau scored six points in the final 10 minutes. The Cardinals had 15 points in the quarter, and Lamar won big, 90-38.

The Cardinals return to action on Sunday, Dec. 8, when the University of Denver comes to the Montagne Center at 2 p.m. The last time these two programs met the game went to double overtime as the Pioneers narrowly held on 117-110 over LU. Moe Kinard set the program record for points in a game (58) and three-pointers in a game (13).