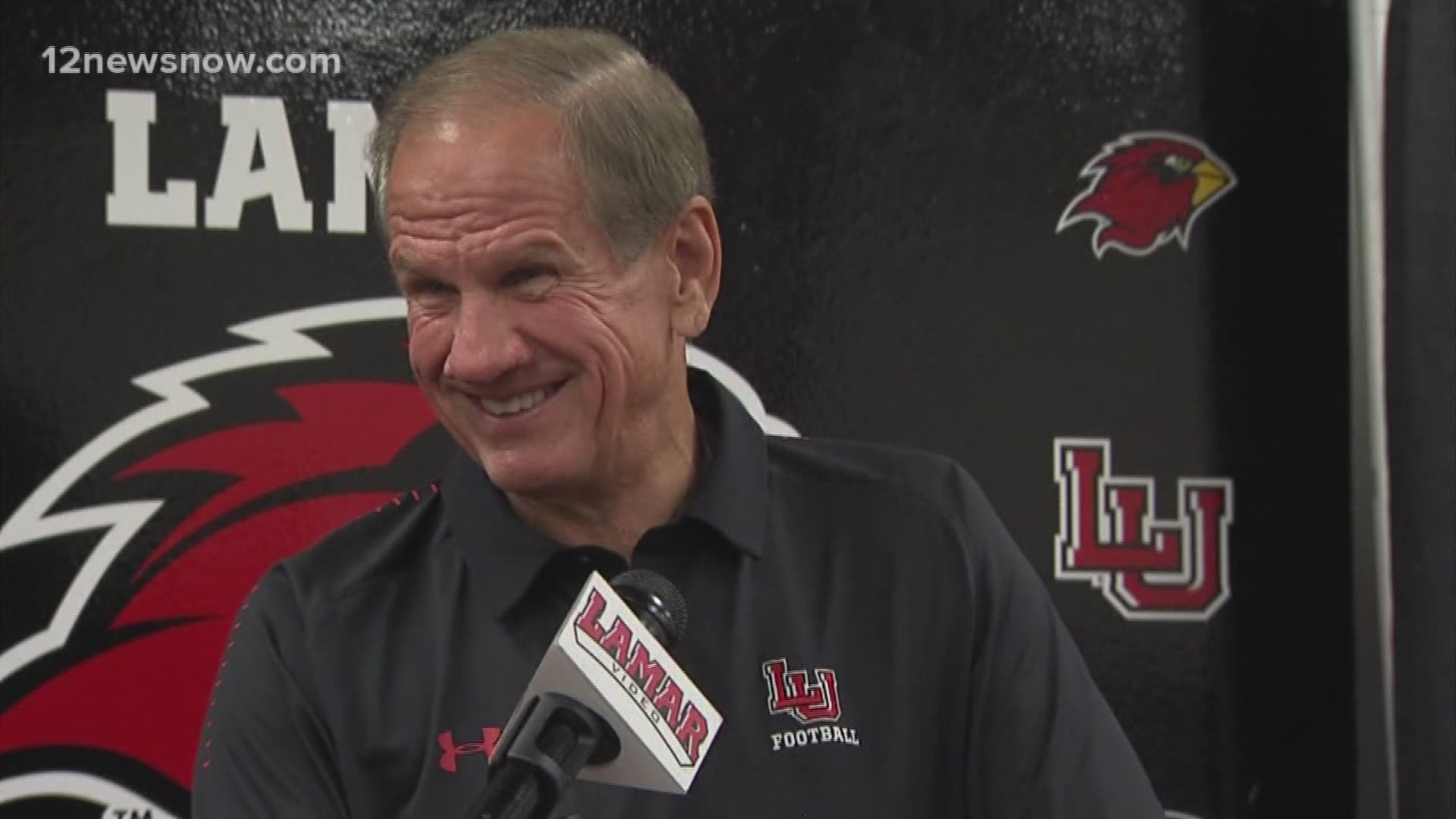 BEAUMONT, Texas — Football season has hit the Golden Triangle, specifically the Lamar University campus, as approximately 100 players reported to the Dauphin Athletic Complex Tuesday for the start of workouts. Tuesday’s report date marked the second time in the past three years that players have reported before the first day of August. The Cardinals spent the day checking with coaches, doing physicals, receiving equipment and spent the afternoon taking pictures and meeting with the media.

Following the pictures, LU head coach Mike Schultz held his first official press conference of the season – his third as LU’s head coach. It marked the first time that any Cardinals’ head coach opened a preseason camp coming off an NCAA FCS Playoff appearance. During a nearly 30-minute press conference, Schultz was asked questions that ranged from his excitement for the start of the new season, his outlook on 2019 and the preseason polls.

“You’re always excited to start a new season,” said Schultz. “Obviously, there is a lot of excitement after the way we closed out the season last year, but this is a new season. Our guys have been working hard since the final horn sounded last year, but everyone here knows that we have a lot of hard work ahead of us. The Southland Conference is always a very tough, balanced league.”

The Cardinals enter the new season hoping to not be a “one-hit wonder” according to Schultz from the Southland Conference’s Media Day earlier this month. The Southland released its preseason poll which saw the Cardinals picked fifth behind Nicholls, Central Arkansas, UIW and Sam Houston State. While the poll displays more respect for the Red and White than in previous seasons, LU was still picked behind three teams they defeated last year, with one team (Abilene Christian) picked behind LU receiving a first-place vote.

“To be honest, we really don’t’ focus on the preseason poll,” said senior linebacker Isaiah Spencer. “We never talk about that as a team, and I’ve never heard anyone discuss the poll. Personally, I think that is more for the fans than anything else. We know to get where we want to we have a lot of hard work ahead of us. I think most guys are just excited to officially get things started.”

Following Schultz’s press conference, the players stepped in front of the microphones and cameras to meet with the media. The Cardinals return 43 letterwinners from last year’s squad, including 14 starters. The majority of the starters come on the offensive side of the ball (8) with only four coming on the defense side (and two specialists).

The Cardinals will be led by three preseason all-conference selections, one on each side of the ball. Senior defensive end Daniel Crosley garnered first-team honors while running back Myles Wanza and kicker Elvin Martinez earned second-team nods. Senior Jordan Hoy appears to be the top candidate at quarterback. The Rockwall, Texas native, started just three games last season – following the injury to starter Darrel Colbert, Jr. – but he did enough in those three games to earn 2018 SLC Newcomer of the Year honors. During his three starts, Hoy was twice been named league offensive player of the week.

The Cardinals enter the new season looking to become the first team to record back-to-back winning seasons since the 1966 and 1967 seasons. The Cardinals will kick off the regular season Thursday, Aug. 29th against Bethel (TN) University. The game against Bethel kicks off at 7 p.m., and will be one of two home games (vs. Mississippi Valley State) before the Cards head to College Station to take on Texas A&M.