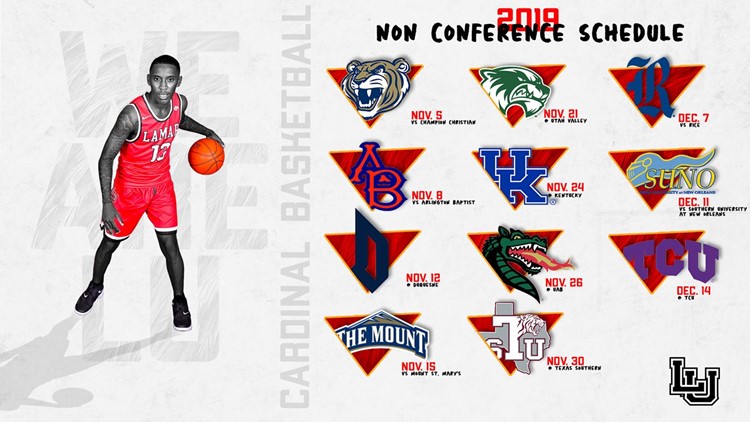 BEAUMONT, Texas — Lamar University will play 31 games, including 15 home dates, during the 2019-20 season, as announced by head men's basketball coach Tic Price Tuesday morning. The nationally-competitive schedule will include games against basketball royalty and five 20-win teams before the Cards open Southland Conference competition in December.

"This is probably the toughest non-conference schedule we've had since I've been here," said LU head coach Tic Price. "The best way to be ready for conference play is to play the best competition, and with games at Utah Valley, Kentucky, UAB, Texas Southern, and TCU, we're going to face plenty of challenges in the opening months of the season. This difficult schedule will prepare us well for the Southland Conference."

The Cardinals tip off the new season Tuesday, Nov. 5 at home against Champion Christian. The contest against the Tigers and another against the Arlington Baptist Patriots (Nov. 8) will be LU's tune-up games before a quick one-game trip to Pittsburgh, Penn., to play at Duquesne (Nov. 12). The Dukes are coming off a 19-13 season and a seventh-place finish out of 14 teams in a tough Atlantic 10 league.

The Cardinals will open the Big Blue Nation (BBN) Showcase at home on Nov. 15 with a game against Mount St. Mary's before heading on the road for the rest of the BBN Showcase, playing at Utah Valley (Nov. 21), at Kentucky (Nov. 24), and at UAB (Nov. 26). The road trip will continue Nov. 30 with a game at Texas Southern to close out November.

Big Red opens December by playing Rice (Dec. 7) at home for the first time since 2014, and a Dec. 11 matchup with Southern University at New Orleans will close out the non-conference home schedule. The final non-conference game of the year will be at 23-win TCU on Dec. 14.

Conference play opens Dec. 18 with Southeastern Louisiana at home before a game at Northwestern State (Dec. 21) closes out 2019. The Cardinals will not play again until after the holiday break with an SLC game at New Orleans on Jan. 2 opening the 2020 portion of the schedule. Abilene Christian (Jan. 4) and Nicholls (Jan. 8) will come to town before Lamar plays at Houston Baptist (Jan. 11) and at home against Sam Houston State (Jan. 15). The Cards have won four of the past five against HBU and were one of only two teams to beat Sam Houston during the regular season in 2018-19. A two-game road trip to A&M-Corpus Christi (Jan. 18) and UIW (Jan. 22) and a one-game homestand against Stephen F. Austin (Jan. 25) will close out January.

The Cards and Cowboys wrap up the regular season and the Battle of the Border March 7 at the Montagne Center.

"Our goal as a coaching staff is to make this program better every year," said Price. "Over the course of the past three years we've recorded at least one upset on a national scale, and we want to continue to build upon that. As a staff, we want to help our guys understand the level of play they need to compete night in and night out to win in this conference."

It has been just five years since Price took over a program that had won a total of six games combined in the two seasons prior to his arrival. Price has 58 wins in the past three seasons and 85 since becoming the head coach of LU men's basketball.