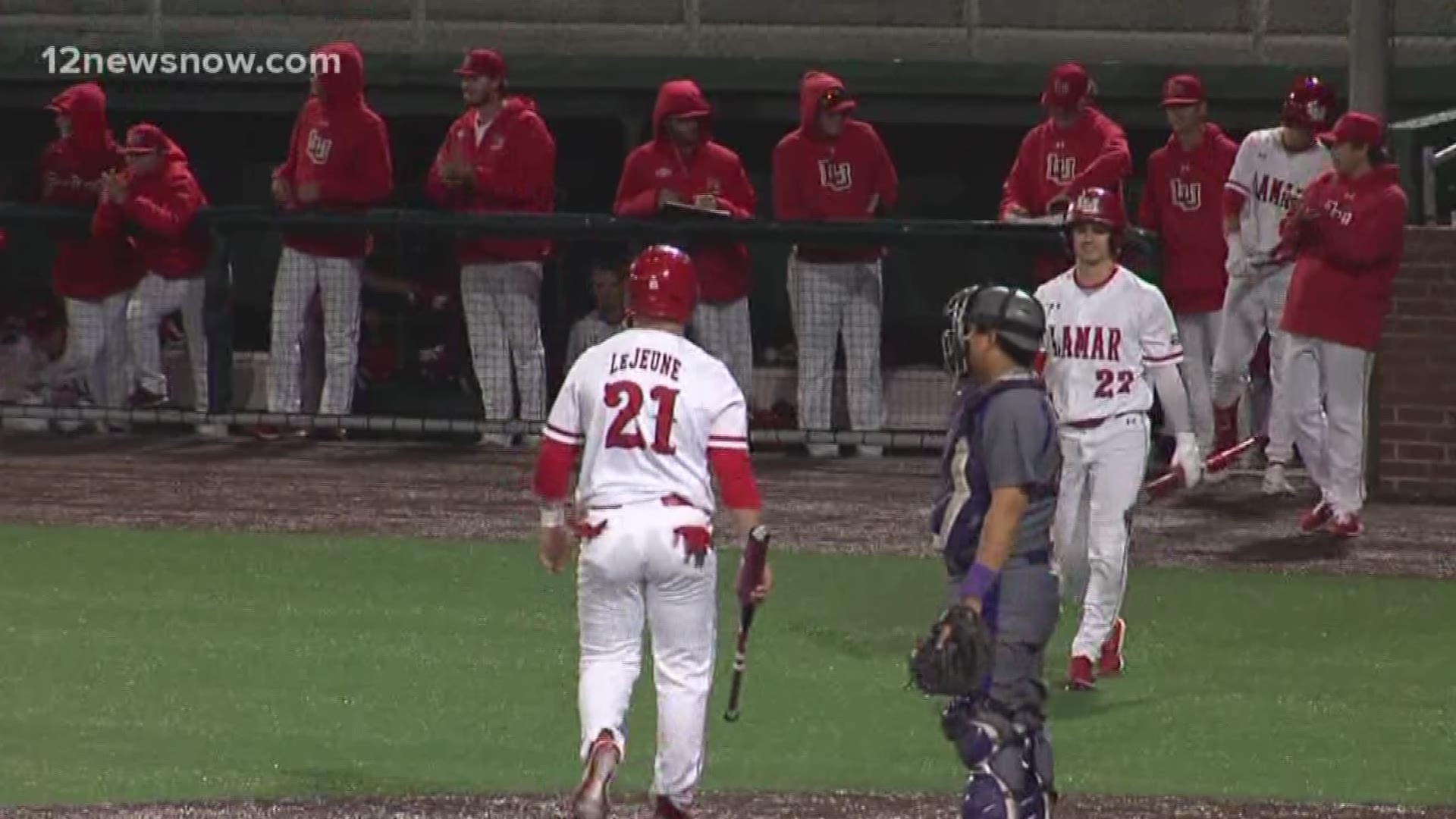 BEAUMONT, Texas — Heading into Southland Conference play with a pretty big confidence builder, Lamar University (7-5) demolished Prairie View A&M (2-12) on Wednesday. The Cardinals outhit the Panthers 17-2 to win the mid-week contest by a score of 12-1.

"This win felt pretty good," said head coach Will Davis. "The last thing we needed to accomplish heading into conference play was get everyone clicking, and I think most of our team is starting to do that now. We've played great defense all year and the pitching has been good all year, and we know how capable the lineup is because of our all our veteran bats. With the average steadily climbing, we're feeling good heading into SLC play."

Lamar gave plenty of pitchers their time to shine Wednesday with 10 Cardinals making an appearance on the mound, including starter Grason Wright, who earned his first win of the season in his first start of the year. Wright pitched two innings and allowed one hit and one walk while striking out one, and he was relieved by Douglas Palmer. Palmer struck out four of the seven batters he faced, allowing just one base runner on a hit-by-pitch. Christian Grigsby pitched the fifth and allowed the one run of the game on a sac fly, and Max Mize took over in the sixth and went one inning, striking out one while allowing one hit that was later caught stealing. Brennen Smith worked through the seventh with no problems, and Joe Buckendorff got his third and fourth strikeouts of the year in the two batters he faced in the eighth before being relieved by Chet Jones, who got the final out of the eighth in a triumphant return from an injury that kept him out of the 2019 season. Josh Hranicky, Mitchell Lee, and John Altman each faced one batter in the ninth to close the game. All told, Lamar struck out 10 while allowing just two hits, three walks, and two hits-by-pitch.

The scoring started a bit slower than normal for Big Red with neither team bringing a run home in the first, but Lamar would strike in the second. A lead-off single by Anthony Quirion, the first of his five on the night, was struck down by a fielder's choice from Kelby Weyler, but Weyler reached second on a single by Cole Coker up the middle. A fielder's choice from Logan LeJeune that got Coker on second then became an error that put LeJeune on second and brought Weyler home, but a 5-3 grounder stranded LeJeune on third after a wild pitch. Through two Lamar led 1-0.

A lead-off error by Prairie View's short stop put Cole Girouard on in the third, and a sac bunt from Reese Durand put Girouard on second. A two-out double by Chase Kemp scored Girouard, and Quirion singled Kemp to third before a 6-3 grounder ended the inning. Through three Lamar led 2-0.

Prairie View briefly made things interesting after a scoreless fourth. A lead-off walk reached second on a bunt sac, and a wild pitch and a sac fly put Prairie View down by just one run, 2-1. Kemp took the final out of the inning himself, and heading into the bottom frame Lamar led by just one, 2-1.

Girouard doubled to open the bottom of the fifth and went another 90 feet on a sac bunt to the pitcher by Durand, but a fielder's choice got Girouard out at home. With two outs JC Correa got on third thanks to a single by Kemp and a PVAMU error, and a doubble by Quirion brought Kemp and Correa home. A strikeout ended the inning, but Lamar had breathing room with a 4-1 lead.

The sixth inning proved to be the breaking point for Prairie View's pitching staff.A one-out triple by LeJeune came home on a single up the middle by Avery George on a 3-0 count, and a single through the right side by Girouard put runners on first and second. A botched fielder's choice put Durand on second, Girouard on third, and George across the plate, and another error allowed Correa to reach and pushed Durand to third and Girouard home. Kemp singled with one out to scored Durand and put Correa on second, and Quirion singled to left to score Correa and push Kemp to second. The final run of the inning came on a two-out single to short by Matthew McDonald, and a fielder's choice ended the inning. Lamar led 10-1 through six.

The final two runs of the game came in the eighth inning. Correa opened the eighth with a double to left and was joined on base by Jose Cintron, who wore one on the first pitch he saw. A single by Quirion loaded the bases, and a sac fly from Logan Berlof brought Correa home. McDonald also hit a sac fly, scoring Cintron for his second RBI of the night, and a 1-3 grounder ended the inning. Lamar led 12-1 through eight and would hold that winning margin thanks to a 1-2-3 top of the ninth.

Heading into conference play this weekend, three Cardinals are hitting over .300 (George, Weyler, and Quirion), and three more are hitting over .225 (Durand, Kemp, and Correa). Those six Big Red bats each have at least 10 hits, and George (10), Quirion (11), and Durand (12) have double-digit RBIs. The pitching staff has also been phenomenal with a combined staff ERA of 2.99 through 105.1 innings. The Cardinals have an opposing batting average of .188, and have struck out 98 batters. Grason Wright, John Altman, Mitchell Lee, Brennen Smith, Joe Buckendorff, and Chet Jones all possess a 0.00 ERA, and four other (Palmer, Grigsby, Dylan Johnson, and Mize) possess sub-2.00 ERAs.

First pitch of Southland Conference season is set for 6:30 p.m. on Friday at Stephen F. Austin (3-10, 0-0 SLC). The Cardinals and Lumberjacks will be meeting for the 90th time this weekend with LU holding a 66-23 all-time advantage.

RELATED: Lamar cruises in series finale to sweep over Akron 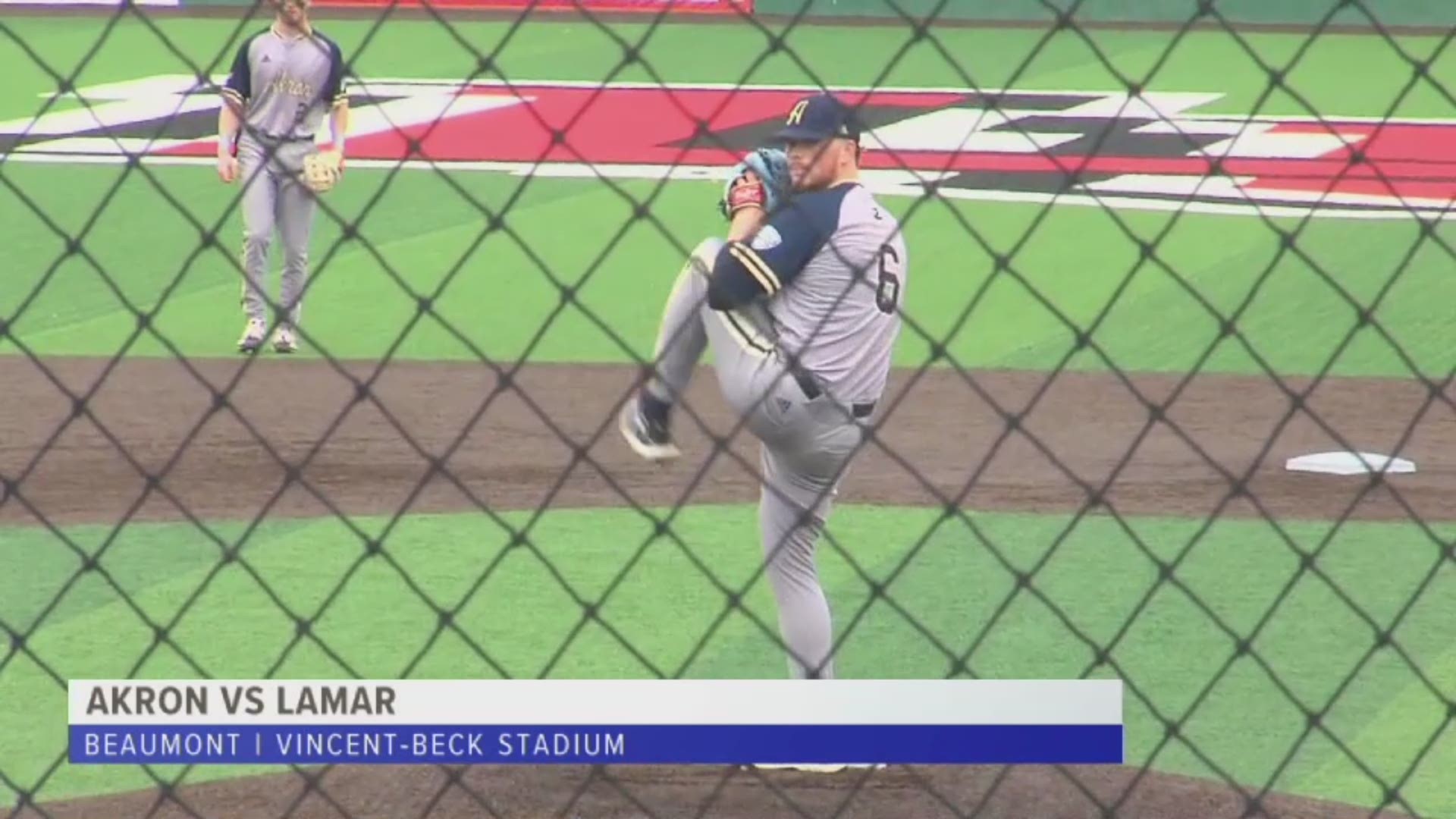