Mike Canizales has the latest with the Cardinals 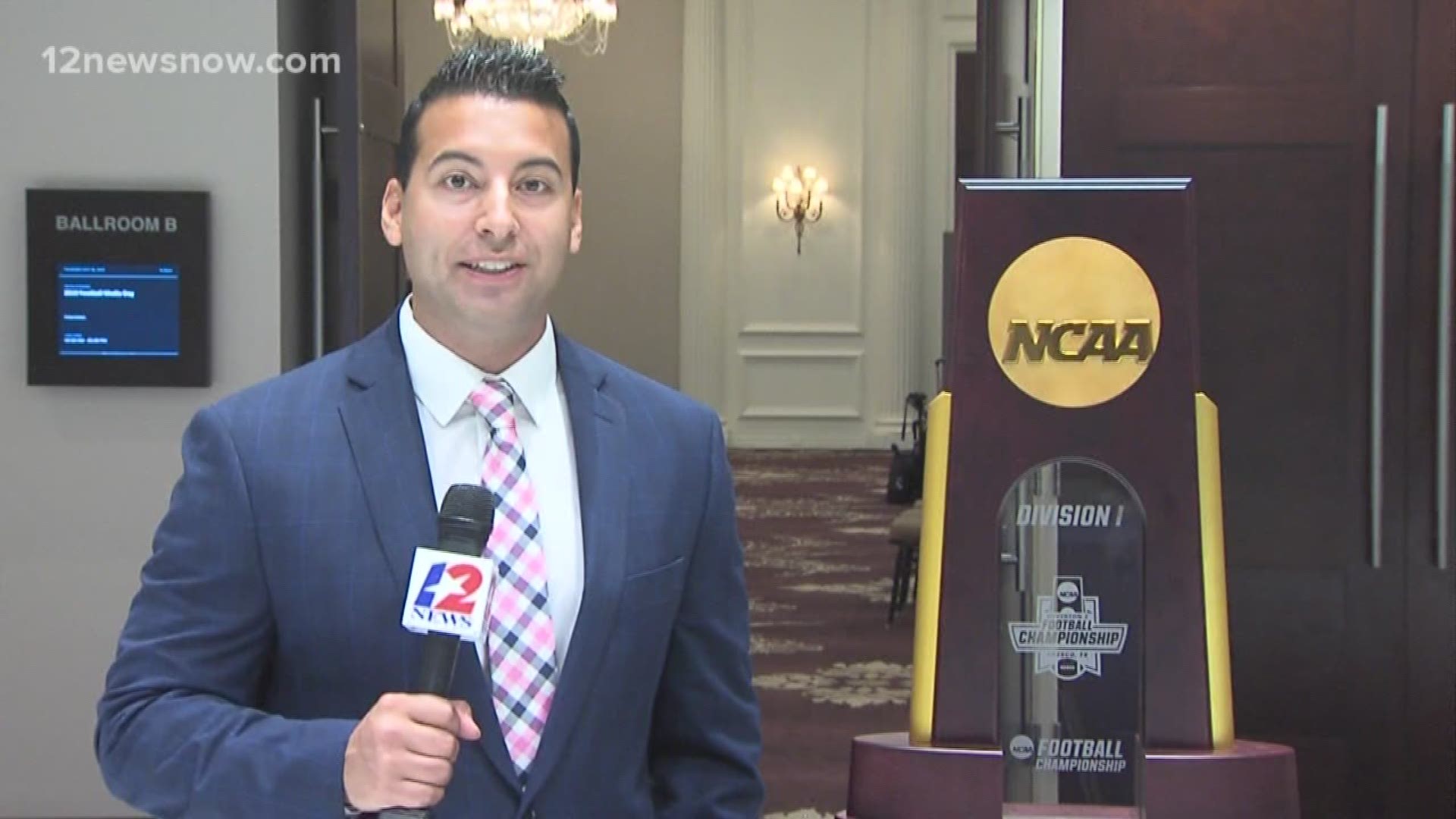 HOUSTON — Lamar University head coach Mike Schultz and selected members of the Cardinals’ football team traveled to Houston, Texas Thursday to participate in the annual Southland Conference Media Day. Viewed as the official kick off to a new season, every Southland head football coach and players from each institution answered questions from local, regional and national media, as well as engaging fans on social media.

The Cardinals took to the ESPN3 stage at 2:45 p.m. and answered questions from writers before taking interviews from the various news stations and from social media. Senior quarterback Jordan Hoy and senior linebacker Isaiah Spencer represented the Cardinals.

“You’re always excited to start a new season,” said Schultz. “This event signifies the start of football season and we look forward to it. Southland Commissioner Tom Burnett, and his staff, do such a wonderful job with this event. They work really hard to pull this event off every year and it’s now football season.”

Schultz was tasked with guiding one of the nation’s youngest squads through the rigors of the Southland Conference during his first season. Although picked 10th in the preseason polls to start his second season, the Cardinals rallied from a 1-4 start to advance to the NCAA FCS Playoffs last year for the first time in program history. Big Red rattled off six straight wins, including victories over three nationally ranked teams, and a last second score that was the result of a blocked field goal over UIW which made SportsCenter’s Top 10 plays.

The Cardinals are now looking to make sure the 2018 season was not a flash in the pan, or a “one-hit wonder.” The Southland released its 2019 preseason poll earlier in the morning with the Cardinals picked to finish fifth. The jump in early season respect is a far cry from last season’s poll, due in large part to what Schultz’s squad accomplished on the field last season.

“To be honest, I don’t know much about the preseason poll,” said Spencer. “We never talk about that as a team, and I’ve never heard anyone discuss the poll. Personally, I think that is more for the fans than anything else. We know to get where we want to be we have a lot of hard work ahead of us.

“As players, there is not much we can do about the preseason poll so we don’t really worry about it,” added Hoy. “Me personally, I don’t like to concern myself with what the media does. We prepare ourselves the same regardless of if we’re picked first or last. Our goal is to get better every day so we can be the best team possible. A preseason poll won’t change that.”

The Cardinals return 14 starters from last years squad but only four on the defensive side of the ball. Attrition took a heavy toll over the offseason as the Cardinals will look to replace its entire secondary including consensus All-American Davon Jernigan.

“Our offseason has gone really well, and we’ve put in a lot of work on the defensive side,” said Spencer. “We have a lot of new safeties and corner backs and I’ve been impressed with the hard work they’ve put in. Those guys are learning the schemes and looking really good.”

The reigning Southland Newcomer of the Year, Hoy, returns from a unique season. A dual-threat option, Hoy served as the Cardinals’ backup signal caller until Darrel Colbert, Jr. went down with an injury. Hoy stepped in and started the next three games. During that stretch, he helped the Cardinals continue their six-game win streak – including wins over two-ranked teams – and was twice named SLC Offensive Player of the Week. The three games were impressive enough to earn Hoy the league’s newcomer of the year honor.

“When I first came here, I was trying to earn the team’s respect,” said Hoy. “I’m now trying to be a leader for this team. I want to do whatever I can to help us get better as a team so we can accomplish the goals that we want.”

The Cardinals officially report for preseason camp July 30th. The season-opener will take place on Thursday, Aug. 29, when Big Red hosts Bethel (TN) University. The game against Bethel will kick off at 7 p.m. from Provost Umphrey Stadium.