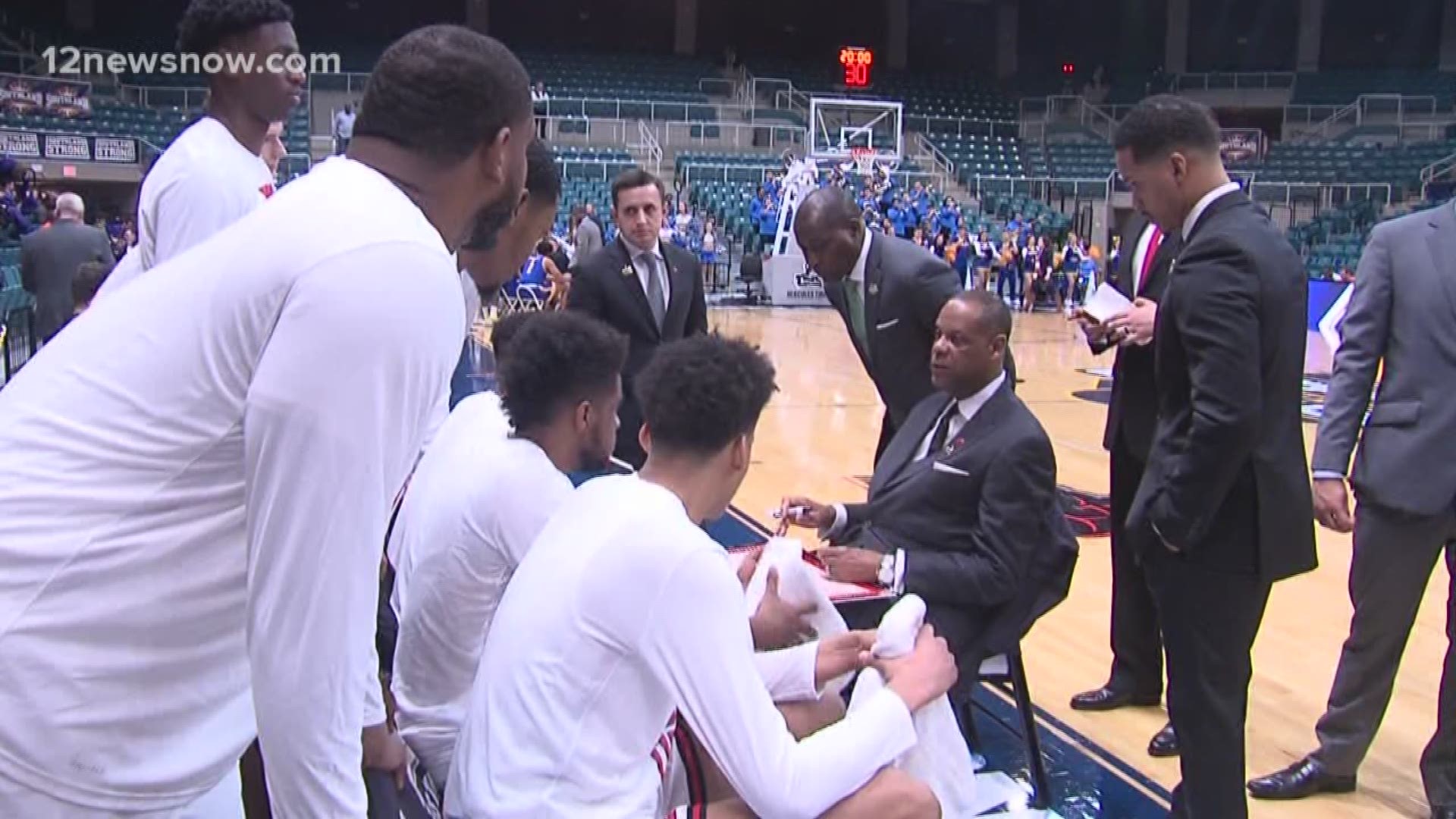 KATY, Texas — Senior forward T.J. Atwood scored a team-high 20 points and Lamar University utilized a late first-half run to take a double-digit lead and never look back defeating rival McNeese, 80-59, in the opening round of the Hercules Tires Southland Conference Championships Wednesday evening from the Merrell Center in Katy, Texas.

Atwood sparked an offense that shot better than 45 percent from the field, and 40 percent (6-of-15) from three-point range. In addition to Atwood, the Cardinals got 19 points from junior Avery Sullivan, 12 from sophomore Davion Buster and 10 from freshman Anderson Kopp.

Atwood was also one of three Cardinals to pull down at least nine rebounds (Sullivan and freshman David Muoka each had 10) in the game. Big Red finished the night outrebounding McNeese, 42-36.

LU also did an outstanding job of hanging onto to the ball turning it over just four times in the contest, and only once in the final 20 minutes of action. The Cardinals forced McNeese into 12 turnovers which they converted into 13 points.

McNeese shot 40 percent from the field but struggled mightily from long range. The Cowboys hit just one triple on the night (1-14), shooting less than 10 percent. A.J. Lawson led the Cowboys’ effort with 22 points, while Shamarkus Kennedy had 19 points and 15 rebounds.

“McNeese is a very good basketball team with great personnel inside and out,” said LU head coach Tic Price. “(Dru) Kuxhausen is a very good shooter, but I thought Davion Buster and Ellis Jefferson did a really good job of face guarding him and not allowing open looks. The most impressive stat to me is that we only had four turnovers for the game.”

Neither team got out to a great start from the field (McNeese 4-of-11/LU 2-of-9) but the Cardinals eventually settled down. Following an 8-2 Cowboys’ run to take a seven-point lead, 16-9, the Cardinals responded with a Buster three and Muoka fast break basket. Jefferson handed the Cardinals their first lead of the game, 24-21, following an and-one with 6:01 remaining in the half.

Jefferson’s basket sparked a 24-5 run that consumed nearly 10 minutes of action. The run ended with a Chris Orlina layup. Despite the McNeese basket, the Cardinals never took their foot off the accelerator. Big Red pushed the run to 28-7 taking a 13-point lead into the locker room, 37-24.

LU finished the half 15-of-36 (.417) from the field, with three triples. The three long-range shots came late in the half and continued LU’s run after a slow start. The Cardinals also dominated the boards outrebounding McNeese, 25-17.

McNeese shot 32 percent from the field in the opening 20 minutes but went 0-of-7 from three-point range in the first half.

Both teams did a great job of holding onto the basketball in the opening 20 minutes with just seven combined turnovers.

In stark reversal from the opening half, both teams came out blazing in the second as LU hit 8-of-15 (.533) to start, and McNeese knocked down seven of their first 14. Despite the Cowboys’ hot shooting, the Cardinals managed to push their lead to 19.

The Cardinals defense frustrated McNeese throughout the game as the Cowboys missed their first 11 three-point attempts. McNeese’s Myles Hutchinson finally ended the shooting skid with a triple with 6:05 remaining in the game. McNeese finished the night 1-of-14 (.071) from three-point land.

“At this time of year, you have to be able to operate your offense and get stops,” said Price. “I thought T.J. Atwood and Avery Sullivan did a great job of getting us to the second round of the tournament. In sports there is one of two things that can happen – the thrill of victory or the agony of defeat. We tasted defeat to these guys Saturday but I thought our team responded really well.”

The Cardinals will be back in action Thursday when they face No. 3 seed Nicholls. The game will tip off at 7:30 p.m. from the Merrell Center in Katy, Texas. The game will be broadcast on Newstalk 560 KLVI and streamed live on ESPN+.

RELATED: Southland to limit attendance for rest of tournament