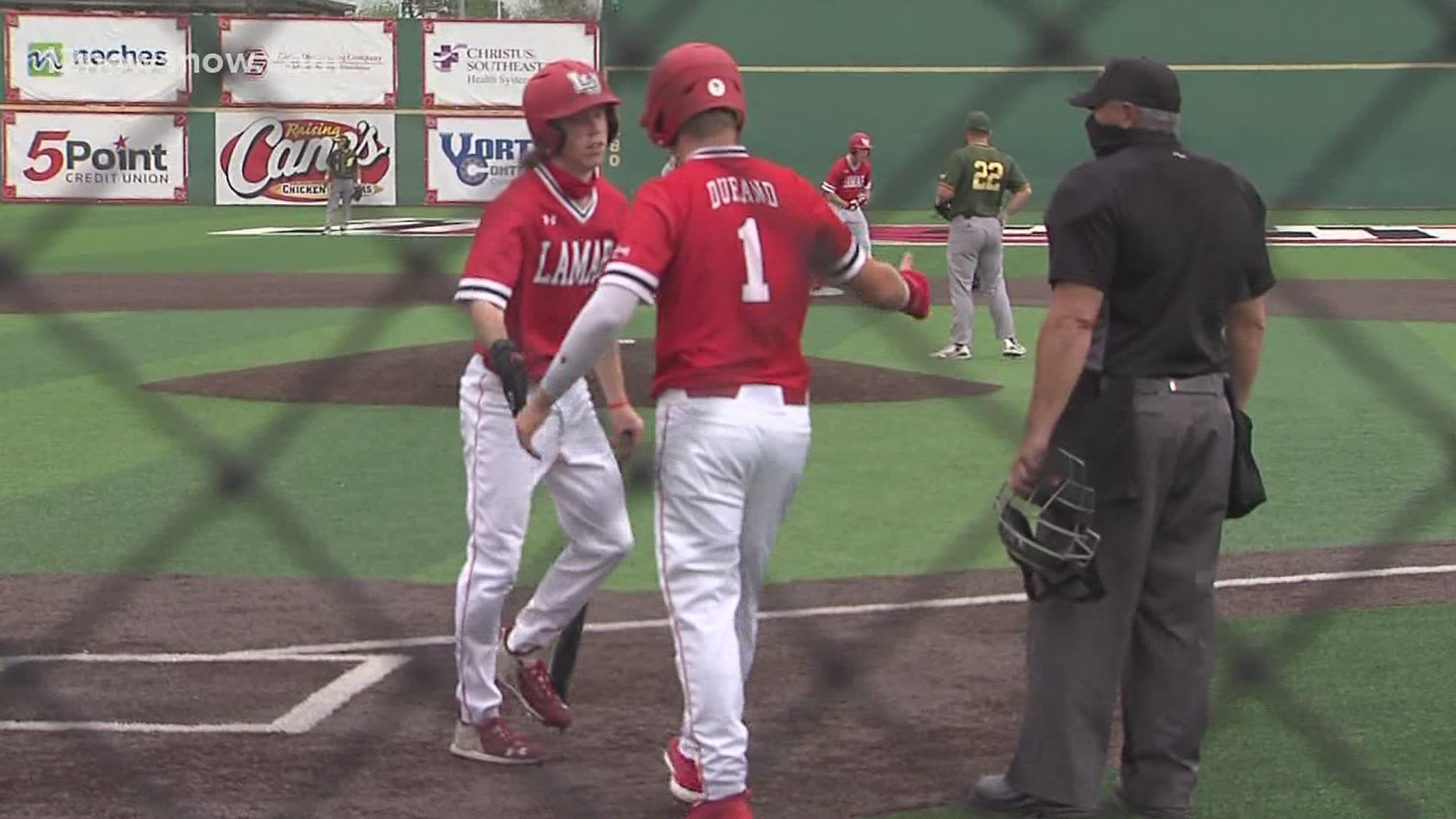 BEAUMONT, Texas — It was a tough day at Vincent-Beck Stadium Saturday afternoon as Lamar University dropped a conference doubleheader to Southeastern Louisiana. The Lions recorded a 6-5 victory in game one and came back in the second game to defeat the Cards, 6-2.

Junior Zach Bravo got the start in game one and pitched 4.0 innings, surrendering four runs on six hits with three walks and a strikeout. He was lifted after one batter in the fifth for Joe Buckendorff who faced eight batters in 1.2 innings surrendering two runs on three hits while striking out two. He took the loss in the opening game. Sophomore Braxton Douthit pitched a scoreless 1.1 to close out the game for the Red and White.

Will Warren got the victory in game one after surrendering five runs – all earned – on seven hits with two walks and two strikeouts in 6.0 innings. He was lifted for Cole Hoskins who got the save after pitching a scoreless bottom of the 7th.

The Cardinals scored five runs on eight hits in the first game of the day, and after rallying to tie the game with two runs in the home half of the first, Big Red took its first lead of the day with a three-run fourth inning.

The Cardinals had runners at first and second with two outs when Daniel Altman got a pinch-hit double down the left line driving in both Reese Durand and Ben MacNaughton. Avery George immediately followed suit with a two-out double of his own to score Altman and give Big Red a two-run lead.

Unfortunately, the momentum was short lived as the Lions answered for three in the top of the next inning claiming a one run lead. Neither team was able to push a runner across the plate in the final two-and-a-half innings as SLU squeaked out a one-run victory.

In the second game, the Lions plated three runs in the second and tacked on one in the fourth and two more in the eighth before LU got on the board. Big Red mounted a rally in the ninth with two runs but could get no closer.

Kyle Bartley pitched five innings of scoreless baseball and got the win, while Kyle Flettrich pitched the final four in relief for the save.

Freshman Josh Ekness got the start for LU in the second game and pitched four innings giving up four runs on five hits, while striking out five and walking three. Ekness suffered the loss falling to 0-1 on the season.

Junior Chase Kemp went 3-for-4 in game two with an RBI, while MacNaughton was 3-for-5 with an RBI. MacNaughton finished the day with four hits, while George had three hits following a 2-for-4 effort in game one.

The two teams return to Vincent-Beck Stadium Sunday afternoon to close out the four-game series. First pitch is slated for 1 p.m.