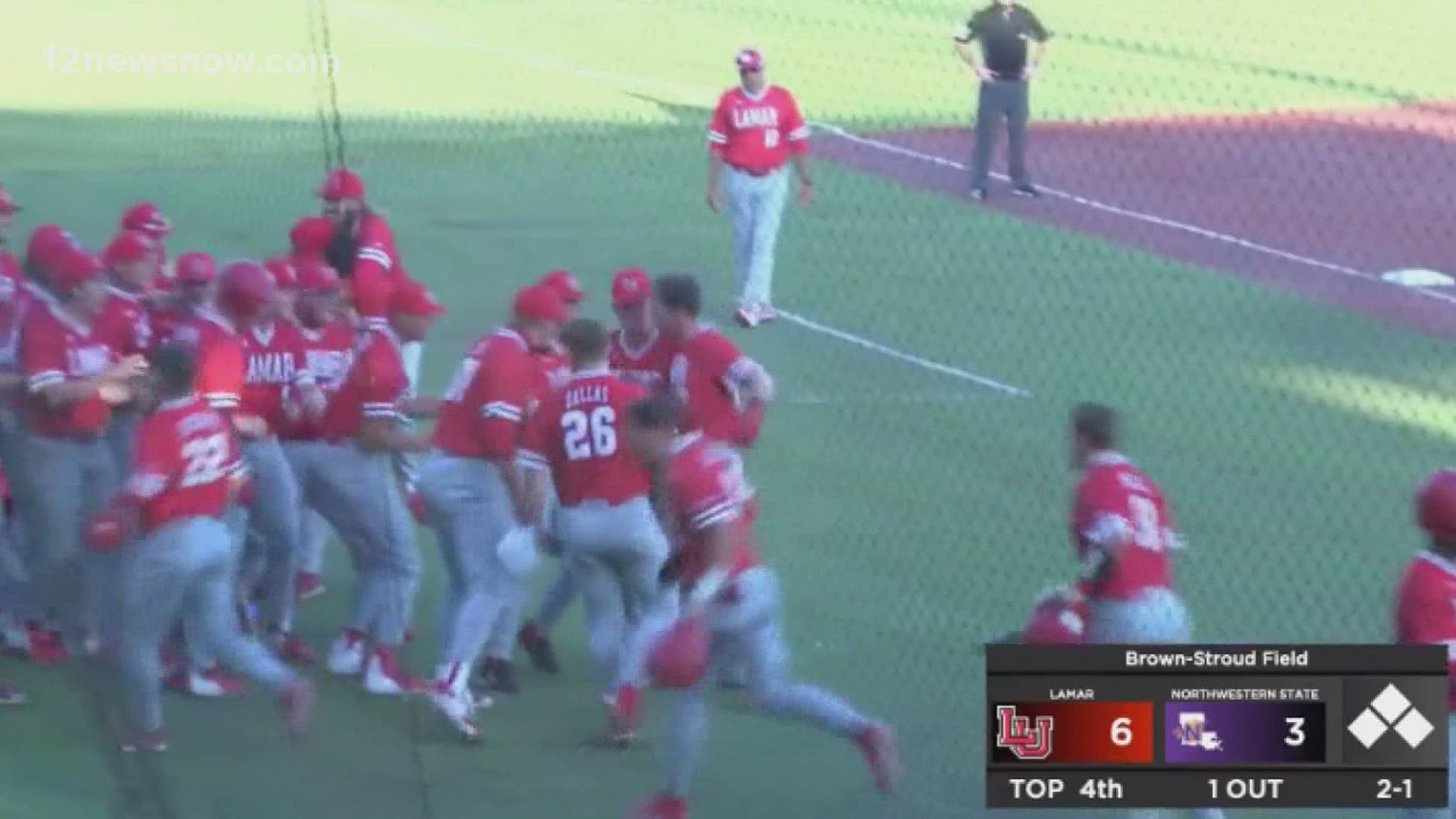 NATCHITOCHES, La. — After having the originally schedule series opener Friday evening rained out, Lamar University and Northwestern State finally got the first pitch out of the way Saturday afternoon playing the first of two doubleheaders in as many days. After taking a lead in game one, the Cardinals dropped an 11-7 decision to Northwestern State. The setback didn't deter LU who bounced right back for a 16-4 run-rule victory in game two.

The Cardinals outhit Northwestern State in the first game scoring their seven runs on 12 hits, but the Demons took full advantage of their seven hits – and one LU error – to score 11 runs. Big Red flipped the script in the second game scoring 16 runs on 11 hits, while NSU was held to four runs on eight hits.

The Cardinals didn't make their fans wait long to have reason to cheer. Junior Chase Kemp gave the Cardinals an early 1-0 lead when he took the fourth pitch of the game over the right field fence for his eighth home run of the season. Three batters and two hits later, the Cardinals tacked on another first-inning run when Reese Durand singled home Avery George from second.

The Cardinals tacked on another run in the second following consecutive hits from Deric LaMontagne, Girouard and Kelby Weyler, but the lead didn't last long as Northwestern State answered with four runs in the bottom half of the second.

The Cardinals answered right back to tie the game in the next half inning. With two outs and two on, LaMontagne singled to right field scoring Durand to tie the game at 4.

Northwestern State forged their way back in front with four runs in their half of the fourth. The Cardinals got a run back in the top of the 6th on an RBI single from George, but Northwestern responded with a run of their own in the bottom half on the inning.

After Northwestern pushed its lead to five, 10-5, the Cardinals struck for two in the eighth off the bat of Girouard. After LaMontagne walked to lead off the inning, Girouard brought him home four pitches later with a shot over the right field fence. Unfortunately, the Demons added a run in their half of the eighth for the final score.

Trevin Michael got the start in game one but surrendered seven runs (five earned) on three hits with five walks in 3.1 innings. Johnathan Harmon pitched 5.2 innings for the Demons surrendering four runs on 11 hits and to pick up the win. The Demons Drayton Brown went 3.1 innings for the save.

George was one of four Cardinals to record a multiple-hit game in the first half of the doubleheader. He was joined with two hits by Durand, LaMontagne and Girouard. Both Girouard and Kemp hit home runs in the first game.

The Cardinals also got on the board first in the opening frame of the second game. After drawing consecutive walks with one out, MacNaughton singled to center driving in Kemp from third. Unfortunately, Northwestern answered with two two-out out triples and took advantage of an LU error to plate three to take a two-run lead in the third.

Big Red came roaring back with five runs in the top of the fourth. After Weyler drew a bases loaded walk to score the first run of the inning, Kemp blasted a 2-1 pitch over the fence for his second home run of the day – this one a grand slam.

LU added to its lead in the very next inning, thanks in large part to MacNaughton's speed on the bases. MacNaughton led off the inning with a walk and then proceeded to steal both second and third, before being driven in by Logan LeJeune. The Cardinals made it a seven-run lead in the sixth. After Kemp scored on a double off the bat of Anthony Quirion, the Cardinals were able to tack on two more runs by way of two wild pitches. Northwestern State answered with a run in the six, before the Cardinals hung a six-run inning on the board in the eighth to take a commanding 12-run lead.

Zach Bravo (3-1) got the start and pitch six strong innings giving up four runs (two earned) on six hits while striking out six Demons with just one walk. He gave way to Douglas Palmer who pitched a scoreless 7th. Junior Max Mize came on to close out the game in the 8th.

Cal Carver started game two for the Demons but pitched just 3.1 innings taking the loss after surrendering six runs (all earned) on four hits. He was one of four Demons to pitch in the second game.

Four different Cardinals had two-hit games, in the second contest, including Weyler who went 2-for-5 with a home run and four RBIs. Kemp was 1-for-2 at the plate with his one hit being a grand slam. He also walked once and was hit by a pitch twice. Weyler and Kemp were two of six Cardinals to drive in a run in the second game, and two of four to drive in at least two.

The Cardinals return to action Sunday to close out the series with another doubleheader. The first game of the doubleheader is slated for a seven-inning game, with the second game set for nine innings. First pitch for Sunday's Game 1 will be at 1 p.m. from Brown-Stroud Field.