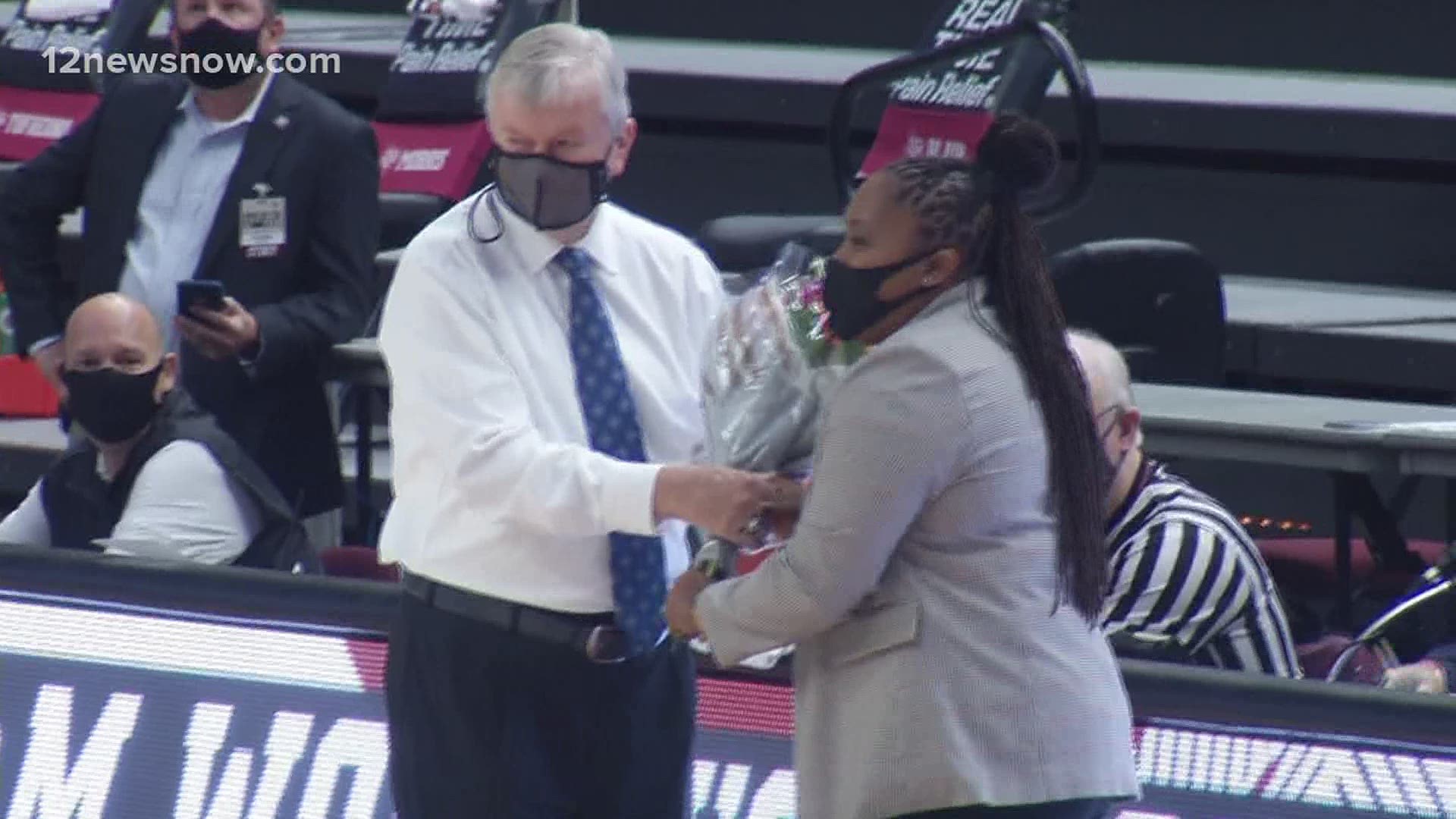 COLLEGE STATION, Texas —  The Lamar University women's basketball program got their 2020-21 season underway when they traveled to College Station, Texas to take on the No. 13 Texas A&M Aggies but fell in the contest, 77-61, at Reed Arena on Wednesday afternoon.

"They are the No. 13 team in the country for a reason," said head coach Aqua Franklin. "I think we got out early. I have been saying it all week. We were eager to play someone other than ourselves. We did let up a little bit in the second quarter, and I think A&M did a great job adjusting. This is the first game. We got to figure that part out. I am proud of the team. They came out with great effort. I am excited about this team."

The Cardinals fell down, 2-0, to begin the first quarter, but after senior Jadyn Pimentel scored the first bucket for the Cards of 2020-21 and a couple of big threes by junior Angel Hastings and freshman M'Kayla Malone, Lamar went on to hold the lead for the quarter, 20-17. LU shot 46 percent in the first frame, including going 3-for-5 from beyond the arc. At the free-throw line, both teams shot an even 5-for-6, while the Aggies outrebounded the Cards, 13-5, to open the contest.

The Aggies bounced back in the second quarter behind a first half double-double from Ciera Johnson. The Cardinals went on to hold their lead until Texas A&M captured just their second lead of the game at the 5:34 mark of the second quarter behind a free throw from N'dea Jones to make it 25-24. The Aggies went on to score six unanswered points before the Cards got back in the points column when redshirt junior Micaela Wilson made a three pointer off a Sabria Dean assist. Texas A&M went on to hold the lead going into the halftime break, 35-27, over the Cards.

The third quarter was a back-and-forth affair as the Cards scored 22 points in the frame to the Aggies' 28 points. LU shot 43 percent in the frame compared to a 64 percent from Texas A&M. The Cardinals pulled within 10 points of the Aggie lead but could not reach the tie as Texas A&M went on to claim the third quarter and leading overall by a score of 64-49. Junior Anyssia Gibbs lead the way for the Cards in the third, tallying six points. Following Gibbs in scoring was junior Umaja Collins with four points.

The fourth quarter saw the Aggies hold onto, and extend, their lead over the Cards. Junior Angel Hastings lead Lamar in fourth quarter in scoring, tallying five points. Hastings finished the contest with 10 points with one assist. Pimentel finished the afternoon as the leading scorer for Lamar as she finished with 12 points and tacked on four assists, four steals and three rebounds.

For the Cardinals, multiple student-athletes made their Big Red debuts as junior Anyssia Gibbs, freshmen M'Kayla Malone and Bebe Galloway made their first appearances, as well as making their first career starts for the Cards. Redshirt junior Micaela Wilson and freshmen Sabria Dean and Dijone' Flowers made their Cardinal debuts on the hardwood as well.

UP NEXT:  The Cardinals will travel to Las Vegas, Nev. to partake in the South Point Thanksgiving Shootout where they will square off against Mountain West competition in San Diego State (Nov. 27) and Fresno State (Nov. 28). 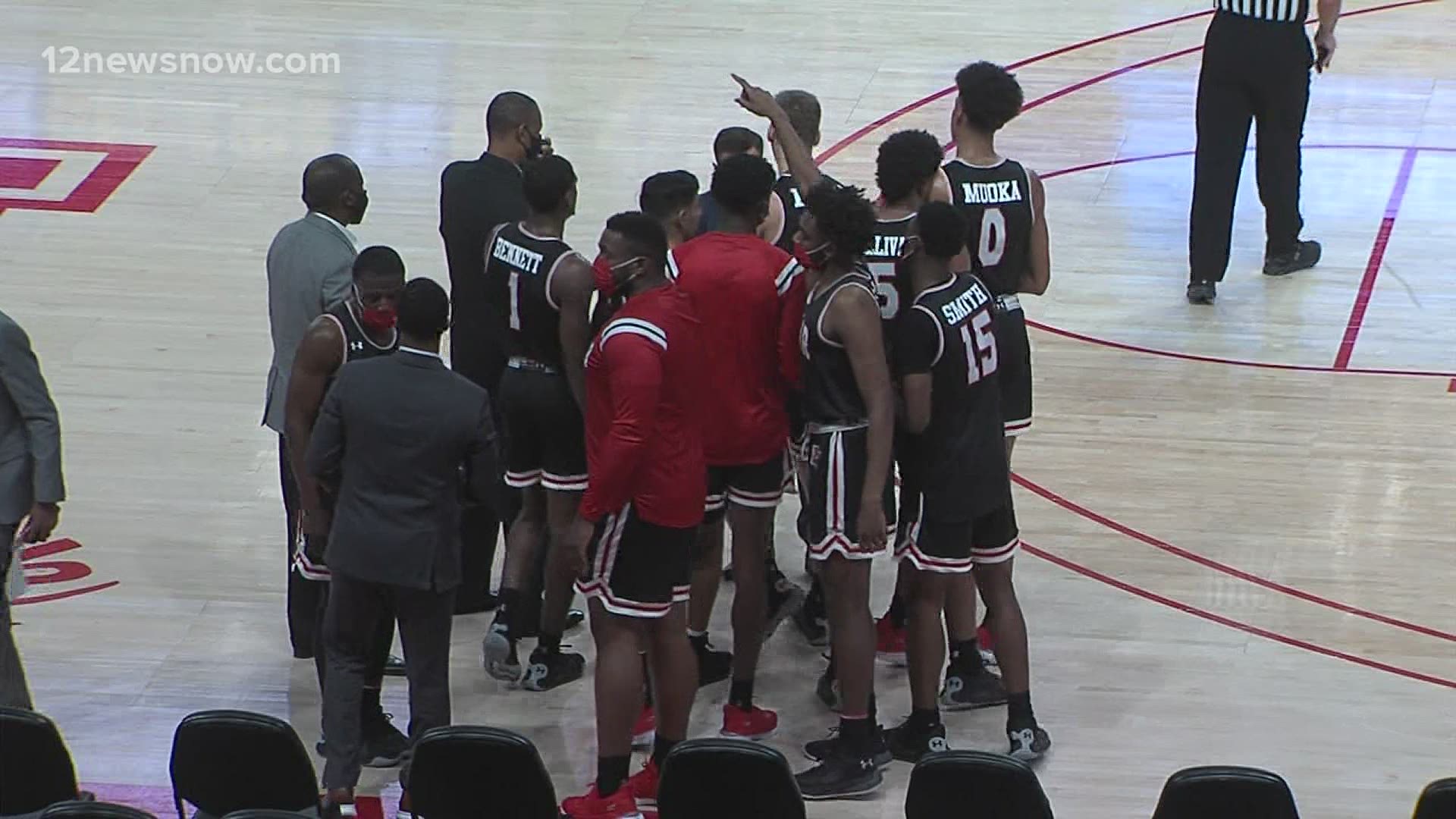