This is a series between baseball's two strongest teams. 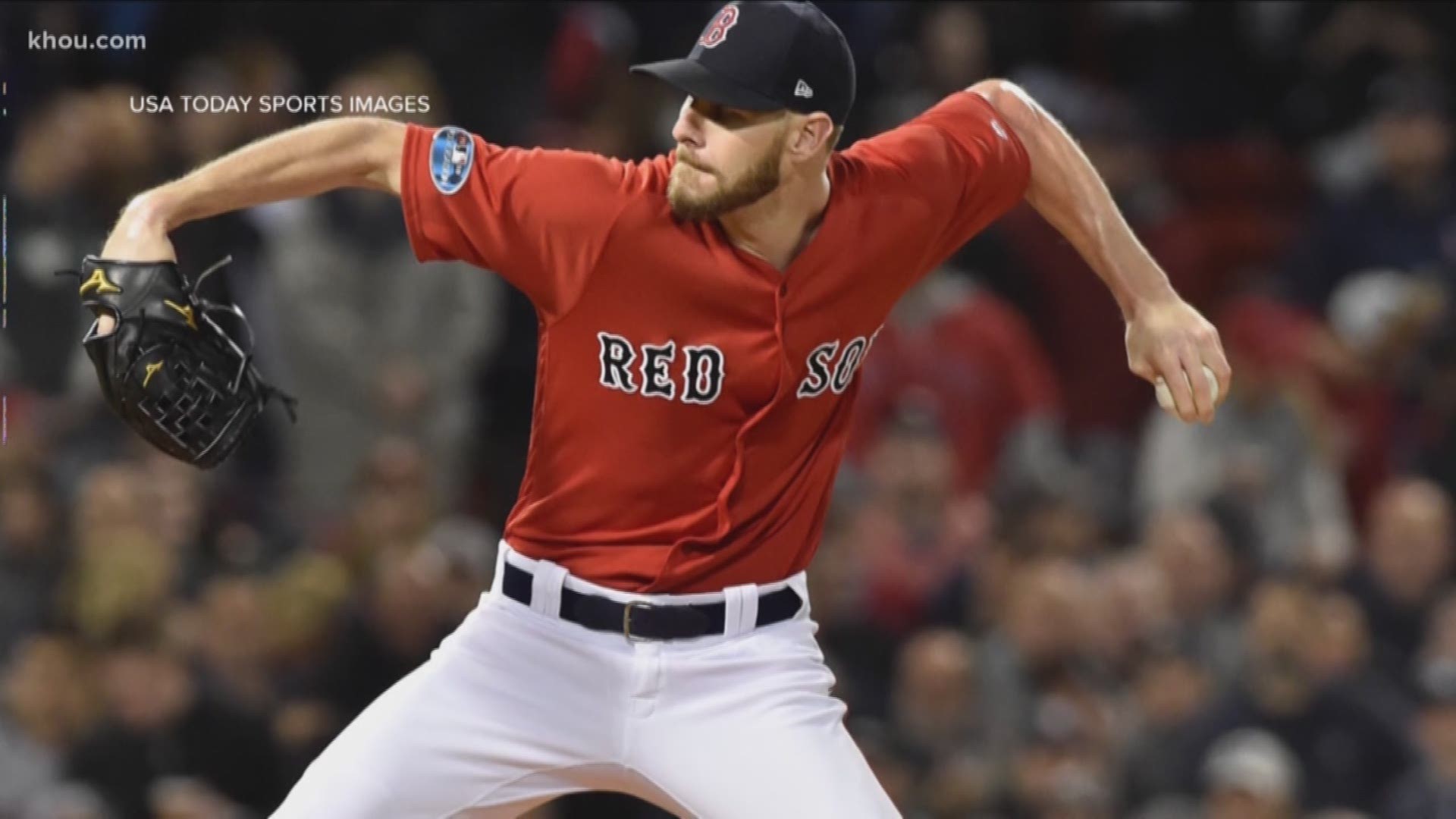 10:50 p.m. Yuli Gurriel put the final touches on an Astros victory in Game 1 of the ALCS with a three-run home run.

The Astros beat the Red Sox 7-2 at Fenway.

Outfielder Josh Reddick sent a solo shot deep to right center field at Fenway Park to put the Astros ahead of the Red Sox 4-2 in Game 1 of the ALCS.

The Astros hold a two-run lead in the ninth inning.

WOOOOO: @RealJoshReddick sent a solo shot deep to right center field at Fenway Park to put the #Astros ahead of the Red Sox 4-2 in Game 1 of the #ALCS. https://t.co/gjVPVeakFq #NeverSettle #postseason pic.twitter.com/LyhtI15PJs

9:30 p.m. Carlos Correa hit an RBI single to score Alex Bregman from second base and put the Astros back up 3-2 in the sixth inning.

8:49 p.m. The Astros worked Red Sox ace Chris Sale into 86 pitches in four innings. Sale gave up just one hit, but he walked four batters and it all cost the Sox two runs in the second inning.

Reliever Joe Kelly was brought in for Boston in the fifth inning with Houston still leading 2-0.

Meanwhile, Justin Verlander went into the bottom half of the inning with just 49 pitches, though he gave up a hit outfielder Steve Pearce. Verlander followed that up with a three-pitch strikeout against second baseman Brock Holt.

Then Verlander ran into some trouble. He'd thrown 18 pitches for only one out in the fifth when threw ball three to Jackie Bradley. The next pitch walked Bradley and loaded the bases.

Verlander then walked Mitch Moreland with the bases loaded, scoring a run for the Red Sox. A wild pitch allowed another run to score, tying the game at 2 runs apiece.

Red Sox manager Alex Cora was ejected between the fifth and sixth innings arguing strikes with the home plate umpire.

1 / 25
Houston Astros fans packed Minute Maid Park to root on their team in Game 1 of the ALCS against the Boston Red Sox.

7:49 p.m. George Springer brought in the first two runs of the game with a single to left field against Sale.

Looking at a full count, Springer hit a four-seam fastball down the middle to score Carlos Correa and Martin Maldonado.

The Astros lead 2-0 in the middle of the second inning.

7:35 p.m. The Astros worked their way out of a jam in the bottom half of the second inning. Mookie Betts led off with a single to right field, but he advanced to second base on a wild pitch by Justin Verlander.

Fortunately, Xander Bogaerts grounded into a double play and the Astros made it out of the inning unscathed.

7:20 p.m. Game 1 is underway between the Houston Astros and Boston Red Sox in the American League Championship Series.

The Astros are four wins away from their second consecutive World Series appearance, looking to take back-to-back titles.

But first, it's the league-leading Red Sox, who won 108 games in the regular season. The Astros finished with the second best record in the major leagues with 103 wins, so this is a series between baseball's two strongest teams.

Since Houston leads off with one of its boldest power hitters in George Springer, you can expect offense early on with this crew. Springer walked to start things off, taking eight pitches for the free pass.

But Jose Altuve grounded into a fielder's choice, followed by an Alex Bregman single.

Red Sox ace Chris Sale struck out Yuli Gurriel to end the top half of the first inning. The Astros stranded one baserunner.

Game 1 is underway between the Houston #Astros and Boston #RedSox in the American League Championship Series.