The Cardinals will be back in action Thursday, Mar. 4, when they travel to Conway, Ark., to take on Central Arkansas. The match against the Bears will begin at 6 p.m 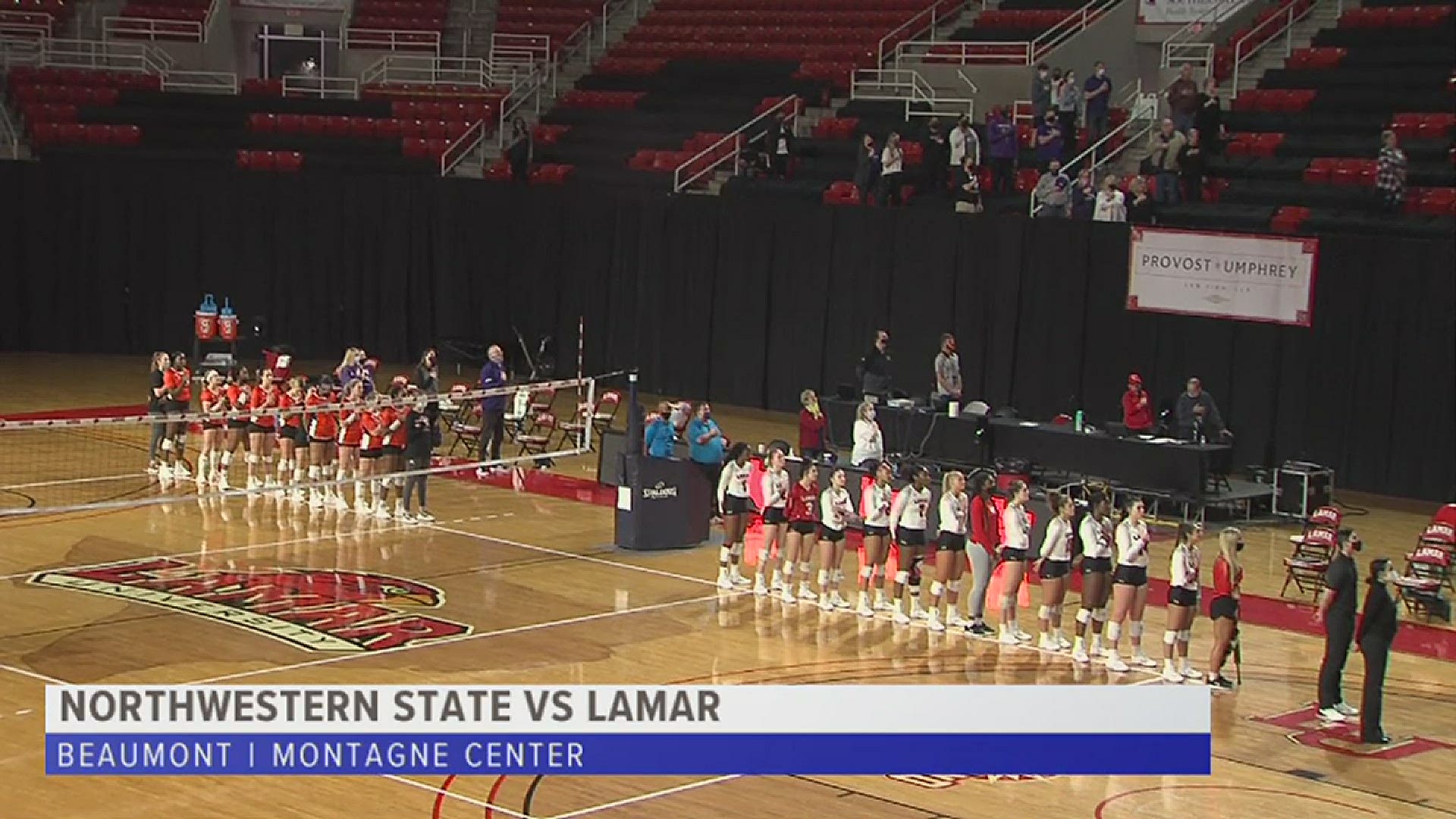 BEAUMONT, Texas — Sophomore Kaitlyn Gil recorded a double-double with 18 kills (.317 attack percentage) and 13 digs as Lamar University swept Northwestern State, 3-0 (26-24, 25-22, 25-22), Tuesday evening in the Montagne Center. The victory was not only LU's first of the season, but it was also the first career win for LU head coach Jordan Lay.

"This is an amazing feeling, and I have my staff and this team to thank for that," said LU head coach Jordan Lay. "There are so many people that put a lot of hard work into this program. As great as this win is, it's not mine – it's ours. It was emotional and there was a lot of energy tonight, but that is what we talked about coming into tonight. We wanted there to be a lot energy and we wanted it to be exciting."

The Cardinals finished the night with a .197 attack percentage (51-23-142) but closed with a flurry posting a 18-5-49 (.265) effort in the third and final set. Big Red also got a lot of help at the net with five different players assisting on at least one block.

Gil was joined in double figures by senior Kayla Neumann's 14 kills and three blocks. Freshman Giselle Santini led an LU defensive effort that didn't allow the Demons to rattle off many sustained runs. She posted a team-high 25 digs, and was one of eight Cardinals with a dig Tuesday.

After gaining a hard fought set one victory, the Cardinals jumped out to a 7-2 lead in the second set. Unfortunately, Northwestern State found an answered and rattled off a 13-7 run to take a one-point lead. Lay called a timeout and settled his squad, and the Cardinals came out with a rally of their own. Big Red outscored their guests, 11-7, to win the second set, 25-22.

It was another close set in the third, and again the Cardinals were put in a position of having to rally, which turned out to be a mirror image of the second set as they posting a 25-22 victory.

"This was a total team effort tonight, and as cliché as that sounds, it is true," said Lay. "We talked about it would take every individual bringing full effort, energy and focus and we did that tonight. There were moments where we got caught down but the resilience and determination of this team was incredible."

The Cardinals will be back in action Thursday, Mar. 4, when they travel to Conway, Ark., to take on Central Arkansas. The match against the Bears will begin at 6 p.m.