Lamar stuns New Orleans in opening round of SLC tournament

The victory now sets up a showdown with No. 6 Abilene Christian in Sunday's semifinals 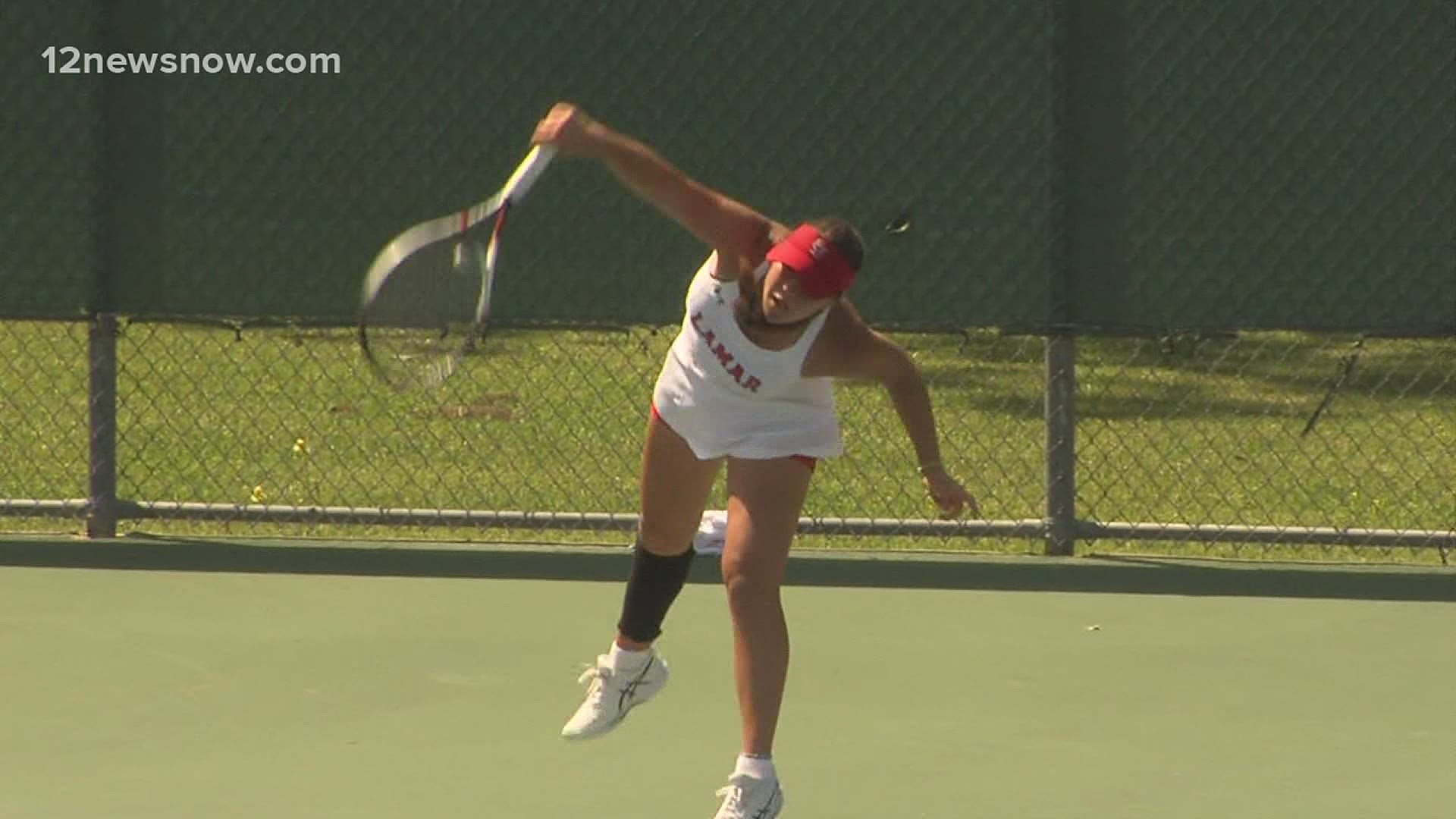 BEAUMONT, Texas — The opening round of the 2021 Southland Conference Championships may have begun as a tennis match but it resembled more of a marathon race by the time it was over. The seventh-seeded Lamar University Cardinals (9-7) outlasted the No. 2-seed New Orleans, 4-3, Saturday afternoon at the Beaumont Municipal Tennis Complex to advance to Sunday's semifinals.

Fans had to wait 24 hours to get the tournament started as the opening round was postponed Friday due to inclement weather, and with the scored tie, 3-3, senior Bianca Vitale and UNO's Ank Vullings decided they were going to make fans wait several more hours to see who would advance. In the end, it was Vitale, and the Cardinals, as she bested the Privateers' top player in a three-set match that went nearly four hours and went to a tie break in all three sets.

"I'm very proud of this team today," said LU head coach David Wong. "What more can you say, other than this was a great match between two really good teams, and neither team was willing to surrender. At the end of the day, I think our ladies wanted it just a little bit more and found a way to win. My hat's off to UNO. They fought really hard today."

Much like in the regular-season match, the Cardinals took the doubles point and did so convincingly. LU got fairly easy wins on courts 1 and 2 with identical 6-1 scores.

Unfortunately, the lead didn't last long as the Privateers bounced back with wins on lines 2 and 5 singles to take a one-point lead. Freshman Alba Perez was able to restore order at No. 3 singles with here 7-5, 7-5, victory to tie the match back up at 2.

Moments later, freshman Emmeline Polevoi recorded a straight-sets decision over UNO's Lea Alguacil, 7-5, 6-3, to put LU on the doorstep of an upset, but fans would have to wait awhile for the final outcome.

With only courts 1 and 4 remaining, both courts were headed to a third set. The Privateers took the first of the two remaining three-setters with a victory on court four, but the Cardinals battled back on court one.

After dropping the first set to UNO's Ank Vullings, 7-6 (7-3), Vitale flipped the script in the very next set. In fact, Vitale won the second set but the exact same score she lost the first, 7-6 (7-3), to set up the deciding third and final set. With neither player willing to give an inch, and both players carrying the weight of their respective teams on their shoulders, the third went to a tiebreaker. With the support of the crowd overwhelmingly in her favor, Vitale was able to force her way out front for a 7-6 (7-5) victory to put LU in the semifinals.

"Bianca's match was a microcosm of the entire team match," said Wong. "There were highs and lows, up and downs, rallies and runs, times you were excited and times you were concerned – and that is how a conference tournament match should be played. Both teams drained every bit of energy out of the fans today."

The victory now sets up a showdown with No. 6 Abilene Christian in Sunday's semifinals. The Wildcats made their way to the second round with an upset of their own defeating the third-seed Central Arkansas Bears, 4-3. The Wildcats had to rally to win the final four matches to advance. Sunday's semifinal will begin at 2 p.m. from the Beaumont Municipal Tennis Center.