The Cardinals will be back in action Saturday, Mar. 20th when they return home to host Sam Houston. Kick off is set for 6 p.m. from Provost Humphrey Stadium 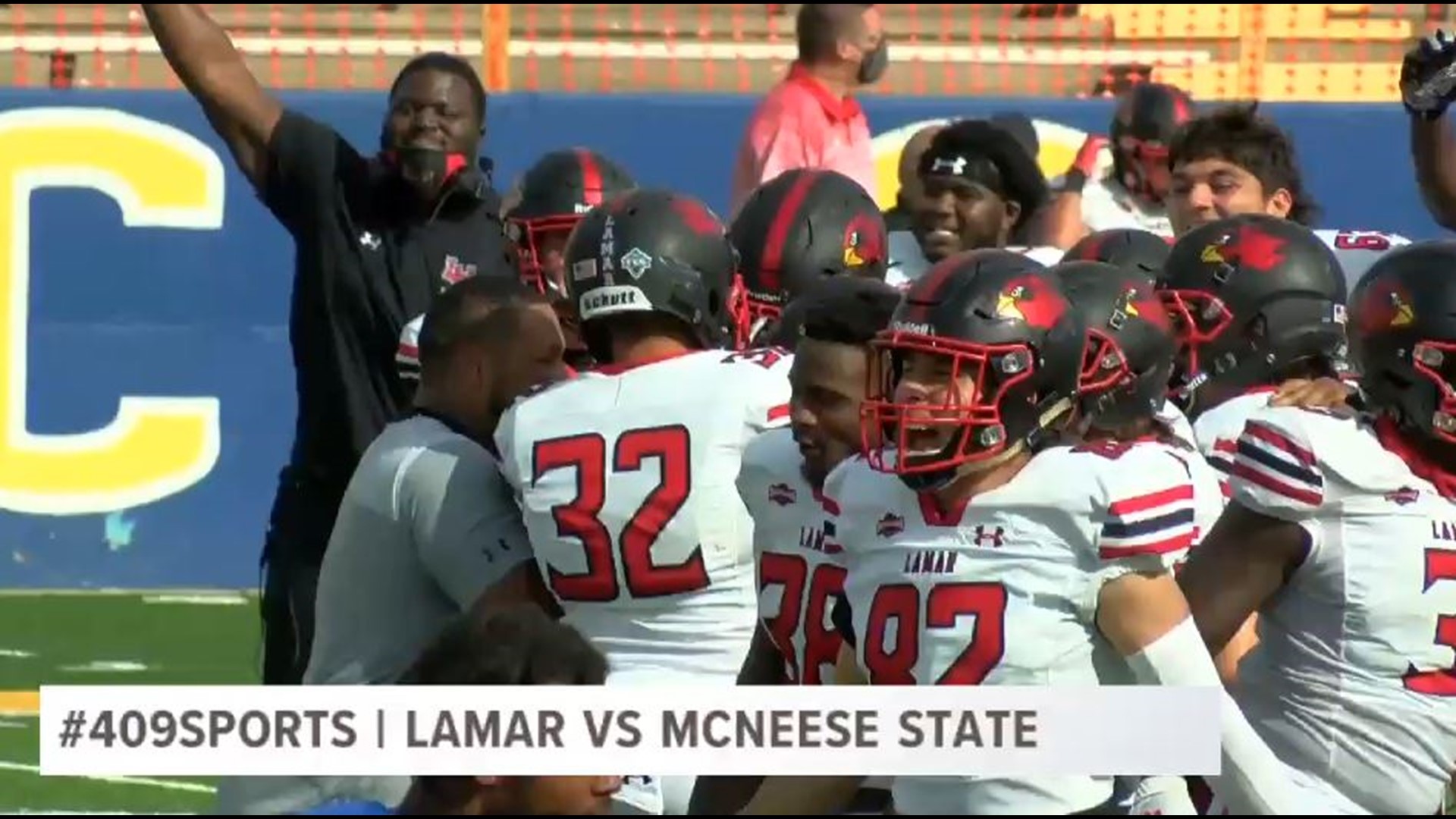 LAKE CHARLES, La. — A five-yard overtime touchdown run from junior quarterback Jalen Dummett gives Lamar University a 27-26 overtime win at McNeese in the final Battle of the Border rivalry game within the Southland Conference. The victory is not only LU's first of the season, but it is also the first in the Blane Morgan era.

Special teams played a huge role in the victory as McNeese had its extra-point attempt blocked following its overtime score, which allowed Bailey Giffen's PAT to be the game winner. For McNeese, it was one of two extra-point misses, as the Cardinals rallied from a 13-3 first quarter deficit to record their second-straight victory in Lake Charles.

"It's really hard to put into words how you feel," said Morgan. "These guys have been through so much the past 12 months – so much adversity. We did some good things last week but we didn't finish and we've talked about that all week. We have to learn to finish. I'm so proud of these guys. It was a gutsy performance all the way around."

The Cardinals finished the day with 314 yards of total offense, including 207 on the ground. Big Red's offense picked up 21 first downs on the afternoon.

Dummett completed 8-of-11 (.727) passes for 100 yards and two touchdowns. Dummett and senior Austin Scott combined to connect with six different receivers on the day.

"What a job by Coach (Matt) Weikert," said Morgan. "We've had to move so many guys around because we've been short players at certain positions. This was a tough matchup but Matt did an incredible job with his guys. You look on paper, and probably no one would give us a chance to win this game but I'm so thankful games aren't played on paper. Paper can't judge a kid's heart, and his willingness to battle."

The Cardinals ground game was led by sophomore Marcellus Johnson who recorded 86 yards on six carries, and classmate Chaz Ward's 56 yards on 16 carries.

The Cowboys jumped out to an early lead after scoring on the first play of the game when Mason Pierce took the jet sweep 80 yards for the score. The Cardinals didn't allow their hosts to hold the momentum long. Led by Dummett, the Cardinals answered right back with an eight play, 58-yard drive that ended with 34-yard field goal from Bailey Giffen. The drive took nearly five minutes off the clock.

The Cowboys answered back less than three minutes later with a 76-yard drive, capped by a 45-yard run from A.J. Carter, but McNeese missed the extra point to claim a 13-3 lead.

After the Cardinals turned the ball over on downs on their next possession, Big Red's defense came out made the next big play. After forcing a fourth down, McNeese ran out the field goal unit. The Cowboys ran a fake, but LU sniffed it out and got the ball back. The Cardinals took advantage of the stop with a 90-yard drive that ended with a Dummett to Griffin Hammond 13 yard pass in the end zone to pull within three, 13-10. The drive was kept alive by a 10-yard reception by Jeremy Davis on 4th-and-4.

LU's defense then began to take control of the game. After the LU score, the Cardinals forced a three-and-out, and Big Red got the ball back which led to another Giffen field goal. The defense then returned to the field and got sacks from Vincent Rollins and Tylo Phillips on the ensuing McNeese drive to force another punt. Unfortunately, Big Red was unable to move the ball and had to punt the ball back with just over a minute remaining in the half. LU kept McNeese off the board in the final 71 seconds of the half.

LU finished the half with 203 total yards, which included a balanced attack (102 yards on the ground). Dummett was a near perfect 6-of-7 (.857) in the opening 30 minutes for 94 yards and a touchdown. The Cardinals were not flagged for a penalty in the opening half.

McNeese ended the opening half with 227 yards, but the majority of their damage came on two big plays early in the first quarter.

After the two teams battled to a scoreless third quarter, McNeese was the first team to break through in the second half. The Cowboys reclaimed the lead on a Carlos Williams 11-yard run two minutes into the fourth. The run capped a 10-play, 86-yard drive.

After both teams were forced to punt on their next possessions, LU got the ball back with just over nine minutes remaining in the fourth. Dummett orchestrated a nine-play, 53-yard drive that ended with a Nathan Gaskamp five-yard touchdown catch – the first of his career.

With the game still tied, McNeese got the ball with 1:46 remaining and moved the ball down to the LU 30 but Cody Orgeron's pass with time running out was picked off by Caimyn Layne to send us to overtime.

In overtime, the Cowboys scored on their possession but had the extra point attempt blocked – a play that would loom large in the outcome of the game.

LU's offense then came on the field to try and answer. After recording four yards on the first two plays, Johnson got the ball and rushed for 15 yards to set up a 1st-and-Goal from the McNeese five. On the very next play, Dummett carried it in from five yards out to tie it up. Then Giffen came on to convert the PAT for the victory.

The Cardinals will be back in action Saturday, Mar. 20th when they return home to host Sam Houston. The game against the Bearkats will kick off at 6 p.m. from Provost Humphrey Stadium.

RELATED: Lamar looks for bounce back in home opener against Incarnate Word