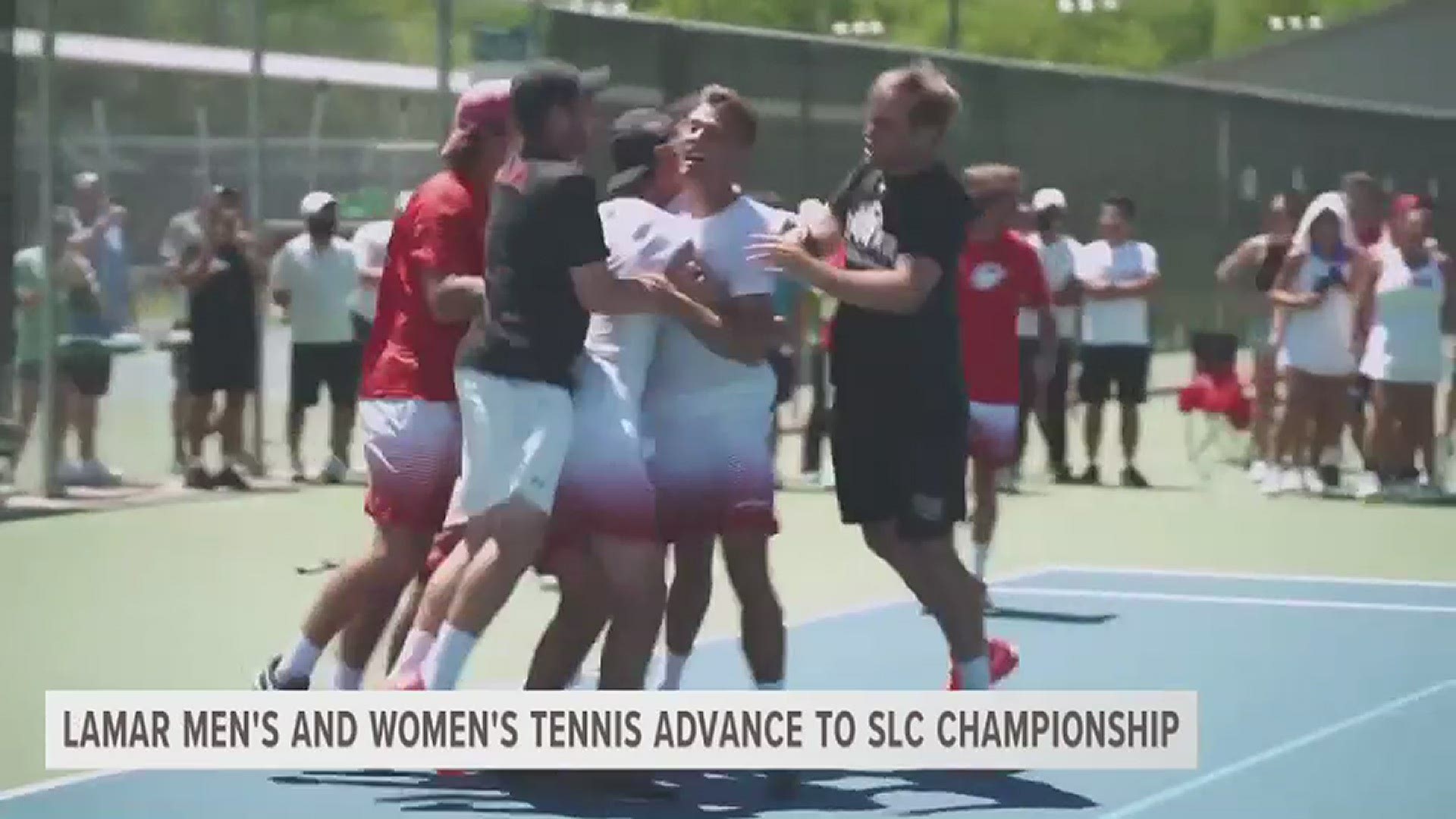 "Today was an array of emotions," said LU head coach Scott Shankles. "The match consisted of a tons of highs and lows. We're coming off a disappointing performance in doubles, but I felt like if we could stay calm in singles, take a deep breath and just hang in there things could go well and they did for a little while. Then UNO made a nice comeback and had all the momentum, but we hung in there and had the match come down to a senior (Nico Mayr) and he came through the way you expect seniors to."

The Cardinals had to play from behind at the beginning of the match as UNO stormed out to a 1-0 lead after taking matches on courts one and two doubles.

Fortunately, there was no long-term effect to New Orleans' quick start as Big Red bounced right back with three-straight wins to take a commanding 3-1 lead. Junior Carlos Paton Canal got the Cardinals on the scoreboard with a straight-sets victory on court No. 4. He defeated UNO's Espen Lagarde, 6-1, 6-2 to tie the overall match.

Freshman Brandon Do handed the Cardinals their first lead of the day with his straight-sets victory over UNO's Johannes Klein, 6-4, 6-1, at the No. 5 position. Sophomore, and 2021 SLC Player of the Year, Axel Vila Antuna had the Cardinals knocking on the door of the overall victory with his 6-4, 6-1, decision over Austin Vos at the No. 1 singles position.

Big Red needed only one more point to win the overall match, but it wouldn't be easy to come by, despite leading on the three remaining courts. The final three matches would go to a third set and the Privateers would win the next two matches placing all the focus on line two.

Mayr won a dogfight in the opening set, 7-6 (10-8), to take an early lead, but UNO's Max Heinzel didn't go quietly. Heinzel battled back to win a close second set, 6-4, setting up the third. In the third, Mayr prevailed with a 7-5 victory.

"Nico has experience winning big matches on this court," said Shankles. "He was the player who won the deciding match in 2018 for the tournament title. Nico worked hard to win the first set 7-6, and as he was going into the second set, we were looking good as a team. That's when I told him to stay focused because you never know how things could change. His opponent was able to come back but Nico never panicked and it showed today as he was able to close it out."

The win sets up a No. 1 vs. No. 2 matchup in the finals as the Cardinals will square off against Texas A&M-Corpus Christi. The match will begin at 10 a.m. from the Beaumont Municipal Tennis Complex.

In a contest that was eerily similar to their quarterfinal victory, the Lamar University women's tennis team defeated third-seeded Abilene Christian Sunday afternoon to advance to Monday's Southland Conference Championship match. The Cardinals defeated ACU, 4-3, in a contest that lasted nearly four hours, and just like Saturday, it came down to the contest at No. 1 singles, and again it was senior Bianca Vitale coming up with the final win to help LU advance.

"I'm so very proud of this team," said LU head coach David Wong. "The amount of fight this team has showed the past two days has been incredible. Things get tough on them, but they refuse to quit, a call goes against them they dig down and play harder, someone goes down with an injury everyone else steps in to pick up the slack. This was a very hard fought match against a very tough and talented Abilene Christian squad."

The Wildcats took the opening match of the day, but like they have done so many times in the conference tournament Big Red responded immediately. LU took a decisive victory at No. 2 doubles throwing all focus on freshmen Jayci Wong and Ana Jolic on court 3. The freshmen duo looked more like savvy veterans as they pushed their match to a tiebreak and then slammed the door shut with a 7-2 decision in the extra frame.

LU pushed its lead to 2-0 following another freshman – Elena Rodriguez – who came through on court 2. Rodriguez ousted ACU's Maryjoe Crisologo, 6-3, 6-4, to give the Red and White a 2-0 advantage.

The Wildcats proved the deficit was not insurmountable as they rallied for wins on courts 6, 5 and 3 to take their first lead of the match (one of ACU's wins came by a retirement). With the Wildcats leading, 3-2, they needed only one win on the remaining two courts to advance to the championship – it was a victory that would never come.

For the second time in the last 24 hours, all the focus turned to No. 1 singles, and just like Saturday, it was another marathon match for Vitale. After dropping the first set, 6-1, Vitale found new life in the second with a 6-3 victory to force a third. With a new lease on life, Vitale didn't let the opportunity pass putting ACU's Nini Memishishi away, 7-5, in the third.

The victory catapults LU into the Southland Championship match against fourth-seeded Texas A&M-Corpus Christi. The match against the Islanders will begin at 2 p.m. from the Beaumont Municipal Tennis Center. Admission to the match is free.