The Cardinals will hit the road for a three-game series at Houston Baptist from Friday, April 23rd to Saturday, April 24th with a doubleheader beginning at 5 p.m. CT 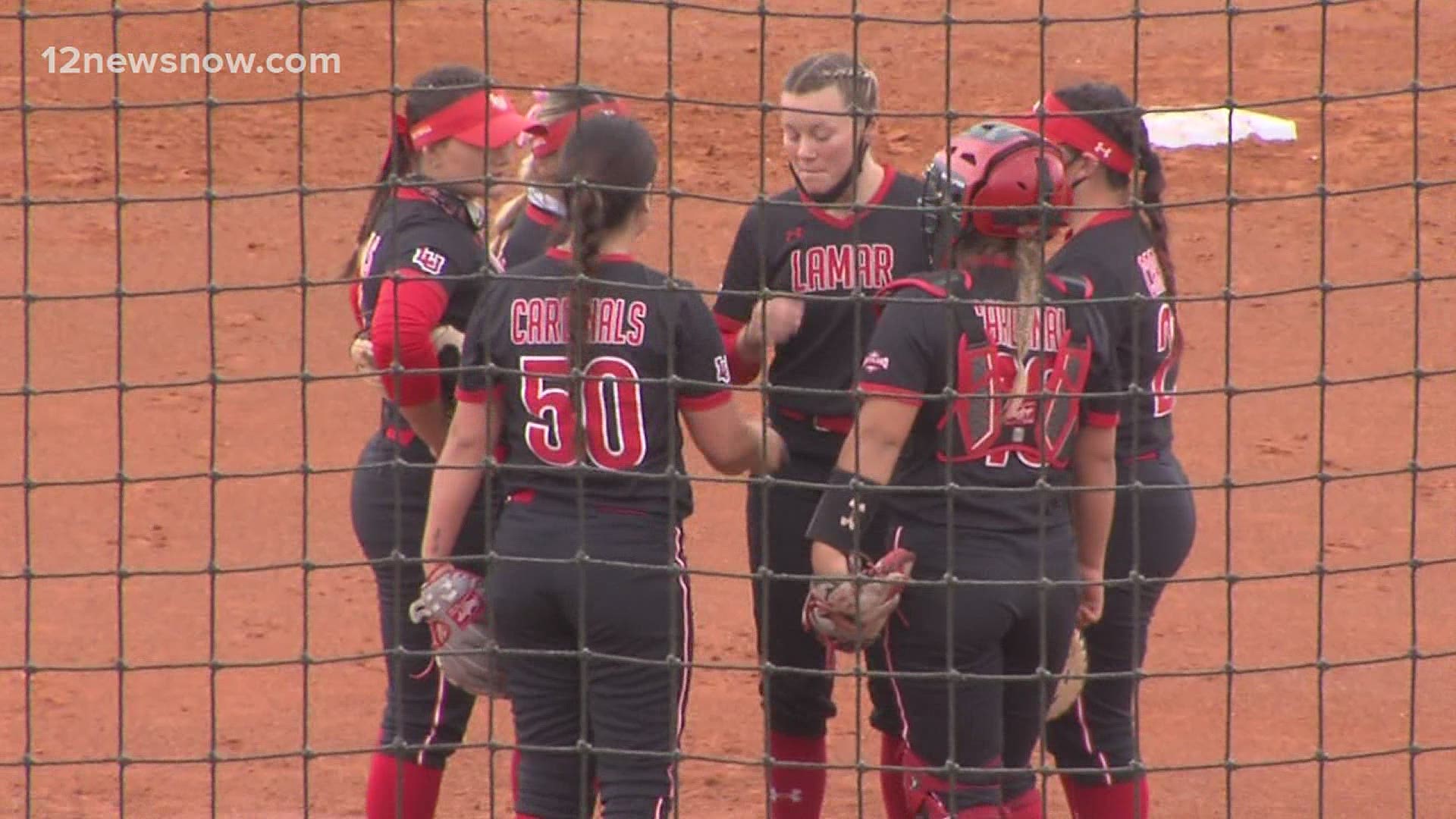 BEAUMONT, Texas — The Lamar University softball program dropped a doubleheader to Incarnate Word on Sunday, April 18th. The Cardinals move to 5-37 on the season overall and 1-17 in conference play.

The league's other Cardinals got the scoring started early on an error by the LU shortstop that was able to bring in three runs in the first before both teams went onto force each other into one-two-three situations while Aaliyah Ruiz allowed just three hits over the first four innings. In the top of the fifth, UIW extended their lead by one to make it 4-0 before the Cardinals tallied two runs in the bottom of the frame to make it a 4-2 game. The Big Red got their first run when the bases were loaded and the UIW pitcher hit Nicolette Ramirez on the second pitch of the at-bat. Senior Hannah Carpenter tallied an RBI as the next batter as she flied out to centerfield to bring home Savana Mata.

The league's other Cardinals offense went back to work in the sixth as they tallied their fifth run on a sacrifice fly to center. UIW tallied their second run of the inning on a single up the middle by Jackson that brought home Torres to make the game in favor of UIW, 6-2. The Cardinals went onto rally in the bottom of the sixth as they brought the contest within one run.

Lamar tallied their first run of the inning on a single to right field by freshman Reagan Jones that scored Sydnee Adams. The Cardinal run was scored in a strange fashion as the LU runner was originally called out at the plate, but after a discussion by the umpires it was deemed that the UIW catcher interfered with the running lane allowing the Cardinal score to stand.

The league's other Cardinals added an insurance run in the top of the seventh to make it 7-5 before the UIW relief pitcher struck out the side in the bottom of the frame to secure the series victory for Incarnate Word.

The Cardinals saw some glimmers of runs as they tallied two hits in the bottom of the first but left both runners on after senior Shelby Mixon forced a one-two-three situation to begin the game. UIW got on the board first in the second inning as they were able to lay down the sacrifice bunt to get Torres across the plate. Lamar was able to knock down one hit in the second but again left runners in scoring position.

The score stood at 1-0 in favor of UIW until the Cardinals got on the board in the fifth after an infield single by Hannah Kinkade allowed Nicolette Ramirez to tag home to make the contest even at 1-1. The league's other Cardinals responded quickly in the sixth to retake the lead 2-1 on a solo home run to left field by Boldt. The Big Red got plenty of chances in the sixth to even things up, but the UIW pitching staff kept the Cards at bay. UIW went onto extend their lead, and control the rest of the contest, in the seventh after an error by the Cardinal first baseman allowed UIW to bring the score up to 5-1.

UP NEXT: The Cardinals will hit the road for a three-game series at Houston Baptist from Friday, April 23rd to Saturday, April 24th with a doubleheader beginning at 5 p.m. CT at Husky Field in Houston, Texas.