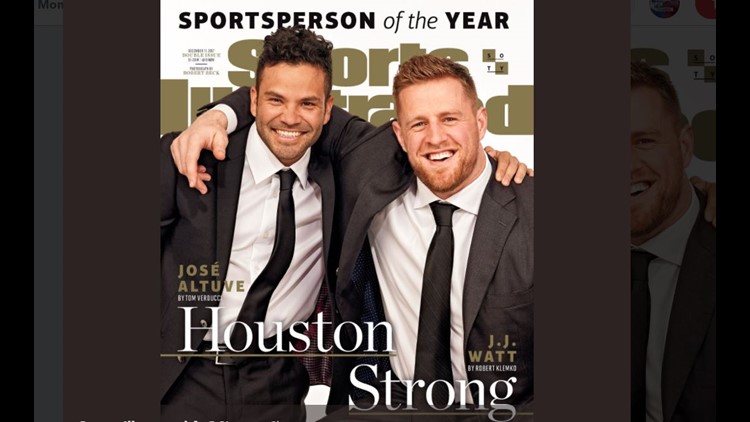 The 2017 Sports Illustrated Sportsperson of the Year honoree raised over $37 million for Hurricane Harvey recovery. He spoke with Jimmy about those efforts as well as his injury and his stylish cane. The Astros' José Altuve is also an honoree this year.
Author: KHOU.com Staff
Published: 5:00 AM CST December 5, 2017
Updated: 10:42 PM CST December 5, 2017

HOUSTON — J.J. Watt made another appearance on The Tonight Show, but this one was extra special because Jimmy Fallon revealed a big honor for Watt.

The 2017 Sports Illustrated Sportsperson of the Year honoree raised over $37 million for Hurricane Harvey recovery. He spoke with Jimmy about those efforts as well as his injury and his stylish cane.

But J.J. is not alone in the honor. The Astros’ José Altuve is also an honoree this year.

“The 5' 6'' Altuve had his own contribution to Houston’s post-storm recovery. The personal journey of the Astros second baseman is an inspirational one, a classic tale of an underestimated athlete overcoming the longest of odds,” wrote Sports Illustrated.

Humbled & Honored.
Houston, this is for you and this is for the hundreds of thousands of people who donated from all over the world. pic.twitter.com/GuR6uB0Y6J

“The stories of these two athletes who care represent two very different paths, but they led to the same destination: #HoustonStrong. Congratulations to J.J. Watt and José Altuve, our 2017 Sportsperson of the Year honorees.”

The pair will accept the honor at SI’s Sportsperson of the Year Award Show on Dec. 5 at Barclays Center in New York. The show will be televised nationally for the first time, airing on NBCSN at 7 p.m. on Dec. 8 and on Univision Deportes Network at 7 p.m. on Dec. 9.

Watt and Altuve are recognized for their contributions both on and off the field and for embodying this year’s key theme of “Athletes Who Care.”

“We will remember 2017 as much for what athletes strove to achieve off the field as for what they achieved on it,” said Chris Stone, editorial director of sports at Time Inc. “While J.J. and José represent two very different paths, they both led to the same destination: #HoustonStrong. This year also marks the 30th anniversary of SI’s original ‘Athletes Who Care’ Sportsperson of the Year honor, which recognizes players who transcended sport alone. This year once again we celebrate a new generation of athletes who care, in all senses of the word: caring about humanitarian efforts, about social and political justice, about their communities and about their crafts.”