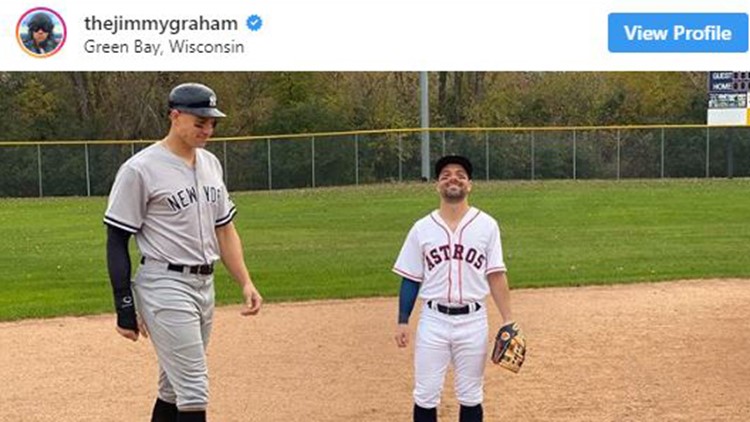 GREEN BAY, Wis. — Green Bay Packer Jimmy Graham just won Halloween with his re-creation of iconic scenes from the ALCS between the Astros and Yankees.

Graham, who is 6'7 like Aaron Judge, teamed up with much shorter Assistant Athletic Trainer Nate Weir, who dressed as Altuve.

Graham and Weir knocked it out of the park with their poses. They also nailed it down to the details, including Judge's foot on the base and both players' arm bands.

In the Olympics of Halloween costumes, this is a sure 10!

Here's the real deal photo. Check out the similarities!

Every time the Astros and Yankees face off, Twitter lights up with side-by-side snaps.

RELATED: 'One of the rarest treats in sports' | Which team wins Game 7 of the World Series historically?

RELATED: Kate Upton fires back at critics after tweet over controversial call in Game 6

RELATED: Taco Bell giving away free Doritos Locos Tacos to everybody in the U.S. today

RELATED: Max Scherzer to start Game 7 of the World Series against the Astros