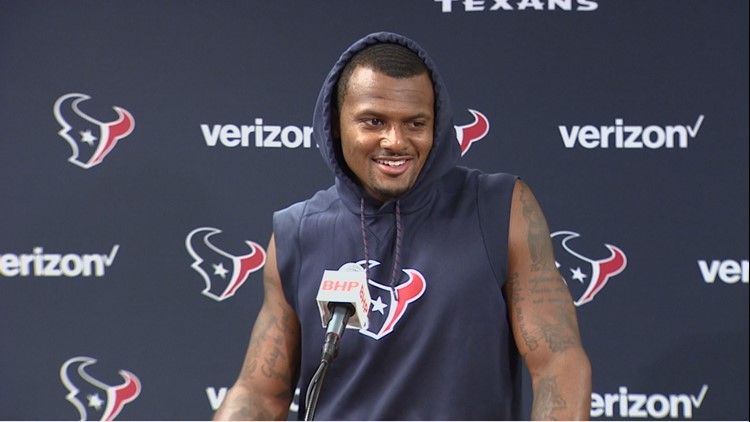 HOUSTON - In a press conference held Wednesday, Texans quarterback Deshaun Watson responded to racist comments recently made about him by a Texas superintendent.

The comment was made on a Chron.com Facebook post about the Texans loss on Sunday to the Tennessee Titans. Frustrated with Watson’s efforts at the end of the game, Onalaska ISD superintendent Lynn Redden said in part, ”when you need precision decision making, you can’t count on a black quarterback.”

In the press conference on Wednesday, reporters asked Watson about the comments.

"That's on him. May peace be with him." said Watson. "I worry about me. I'm not worried about what he has to say."

When asked if he experiences racism as a quarterback, Watson said, "Of course. It's everyday life."

He continued saying, "But I'm all about love, so I don't focus on none of that. I love all people. And that's what I focus on."

"That's on him. May peace be with him." - Deshaun Watson on racist comments made by Onalaska school superintendant.

"(Deshaun) is one of the greatest guys I've ever coached. He represents everything that's right about football, about life. His teammates respect him, his coaching staff respects him. And in this day and age, it's just amazing that that BS exists, but it does." said O'Brien.

The coach also said the team is moving forward and will be concentrating on the Giants game this Sunday.

Texans star J.J. Watt commented briefly before moving on with the press conference.

On Tuesday, the Onalaska Independent School District posted a notice on its website saying the school board would have a special meeting on Saturday to discuss Redden's contract.

Redden told the Chronicle that he thought the message was private, and quickly deleted it once he realized his mistake.

The full comment read: "That may have been the most inept quarterback decision I've seen in the NFL. When you need precision decision making, you can't count on a black quarterback."

It didn’t take long for the comment to be shared by those disgusted with what was interpreted as a racist remark.

Attempting to set the record straight, Redden says he understands why some would think this was racist, but it was never his intention. Instead, Redden claims he was only referring to, “the statistical success of black NFL quarterbacks.”

Redden now questions his own decision making, saying he wishes he never made the post and that he hopes his students don’t see it. He has declined KHOU 11 News’ request for comment.

OB goes off on Texas superintendent for his Deshaun comment https://t.co/c19UDBopfz