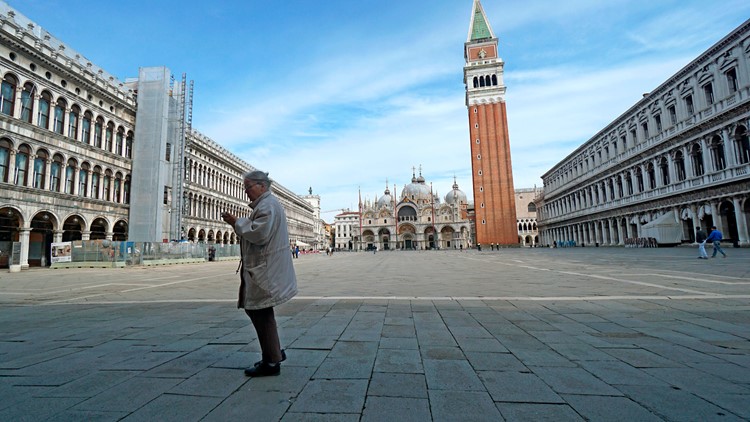 Photo by: AP
A woman walks in St. Mark's Square in Venice, Italy, Monday, March 9, 2020. Italy took a page from China’s playbook Sunday, attempting to lock down 16 million people — more than a quarter of its population — for nearly a month to halt the relentless march of the new coronavirus across Europe. Italian Premier Giuseppe Conte signed a quarantine decree early Sunday for the country’s prosperous north. Areas under lockdown include Milan, Italy’s financial hub and the main city in Lombardy, and Venice, the main city in the neighboring Veneto region. (Anteo Marinoni/LaPresse via AP)

VERIFY: What Italy is experiencing under nationwide quarantine

The Italian government announced the entire country is under quarantine. Here's what that means for Italians and those currently in the country.
Author: VERIFY, Terry Spry Jr.
Published: 7:33 PM CDT March 10, 2020
Updated: 5:43 PM CDT March 11, 2020

This week, Italy announced a nationwide quarantine as part of a major effort to contain the coronavirus there.

It’s the first nationwide quarantine announced during this global epidemic. The quarantines in China were for select cities and provinces. All 60 million people in Italy are now under quarantine.

So what are the rules Italian citizens should follow now that they’re all under quarantine?

The decree quarantining the whole of Italy has three provisions to it:

The last two are clear enough, but what exactly do the measures refer to in that first provision? According to the decree's FAQ page:

The rules are about preventing people from gathering together unnecessarily.

The Italian government says citizens should not leave their homes except to work, for health reasons or for other needs such as purchasing essential goods. A person must provide proof they are doing one of these through a self-declaration to local or state police. The veracity of these statements will be checked and lying in these declarations is considered a crime.

That sounds extremely restrictive at first, but as the FAQ page points out: there are certain freedoms people in Italy are allowed during the quarantine.

Traveling to parks for sporting activities and exercise is still allowed, as long as you don’t do it in groups. Pubs and restaurants can remain open from 6:00 a.m. to 6:00 p.m., but they must guarantee that guests will remain at least one meter from each other. People in Italy are allowed to buy groceries and will be able to continue to shop in stores as they will remain stocked. Those in the country may go to stores to buy other necessities as well.

A restaurant or pub owner who fails to enforce these social distancing recommendations and public health rules might have their operations suspended. People may shop at closed markets such as supermarkets as long as they abide by these rules, but open markets are set to stay closed during the nationwide quarantine.

Schools and universities in Italy have remained closed.

The Italian government urges tourists to limit travel to places they need to visit in order to return home. Airports and train stations in Italy will be remaining open.

UPDATE: The Italian government has since increased restrictions for the quarantine.

This means that shops, bars, restaurants, hair dressers, beauty centers and other such places are now closed.

Conte did not mention anything about parks, which were previously said to still be open.

He specified transportation services, such as airports and trains, were still operating.

Aside from that, everything remains the same as above.