Three people were killed in the hardest hit area of Onalaska, including the subdivision of Yaupon Cove, Polk County officials said. 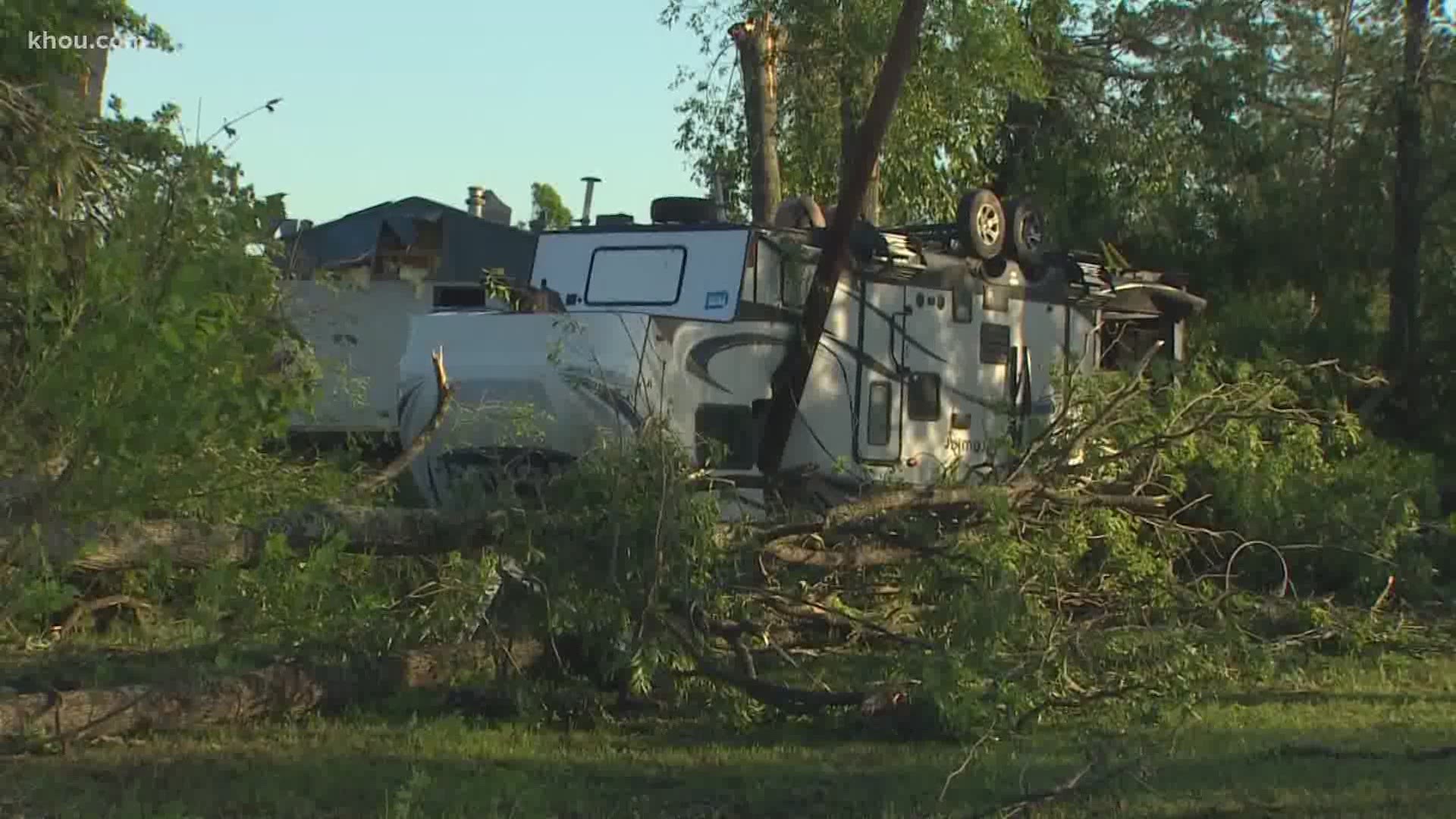 As of Friday, officials reported 306 homes damaged and 173 homes destroyed.

The severe weather, which was first reported at about 5:30 p.m. Wednesday, killed a least three people and injured about 33 others in Polk County alone. Four of these individuals are in critical condition.

Among those killed were Texas Department of Justice employees Taylor Holbert 29, and Brooke Ivey, 27.

County officials described a third person killed in the tornado as a man in his 50s. His name has not been released.

EF-3 damage estimated winds at 140 mph were identified in the Paradise Acres subdivision in Onalaska in Polk County.

During a briefing 1:30 p.m. Thursday, County Judge Sydney Murphy said rescue crews continue to sweep the affected area. She also said large parts of Onalaska are currently under a boil water notice as result of the tornado.

The Red Cross is assisting 100 residents who lost their homes. OEM officials said a local state of disaster has been enacted, and the Texas Task Force is on scene to assist. Residents seeking shelter should call Polk County officials at 936-327-1208.

Murphy said food and water is available for residents at Garland Park Pavilion Thursday until 7 p.m. and Wednesday from 8 a.m. - 7 p.m.

If you're in need of clothing or household items, Murphy said to contact the Oasis Resale Shop at 936-327-1208.

If you're interested in helping Polk County residents, the Polk County Center of Hope is seeking volunteers and non-perishable food donations. Call 936-327-7634 for more instructions.

The tornado was first reported by the National Weather Service at 5:30 p.m. as it tracked from Walker County into Polk County, about 75 miles northeast of Houston.

"We were informed that the Onalaska and northern portions of the county were in the primary threat area," stated Polk County OEM on its Facebook page.

The tornado warning went into effect at about 5:45 p.m. and less than 30 minutes later there were reports of damage.

KHOU 11 Chief Meteorologist David Paul said the storm system tracked more than 200 miles across multiple states over a six-hour period on Wednesday. The Associated Press and CBS News reported there were at least four other deaths outside of Texas, including a trailer factory worker whose body was found a quarter mile from his workplace in Marshall County in southern Oklahoma. A second death was also reported in that same county. Also, a woman was killed on a bridge in Woodworth, Louisiana, 15 miles south of Alexandria. A man died in Louisiana when he went out in the storm to get a trash can, the AP reported.

Back in Texas, Ashley Dreahn was one street over when the Polk County tornado touched down. This is video she shot, along with photos of the storm damage.

Even into the very early-morning hours on Thursday the search and rescue efforts were still ongoing.

"We do not need any spontaneous volunteers. At this time, we have the personnel we need on site and we will request additional personnel if needed through mutual aid agreements and the State."

Officials are asking people to stay out of the community to leave the roads clear from extra traffic. FM 356 in Onalaska was shut down due to storm damage as of Wednesday evening.

1 / 11
Ashley Dreahn
These are photos from Wednesday's storm in Polk County.

Some photos that were taken near Onalaska High School show substantial storm damage. Amanda Price said her brother-in-law noticed that the pressure felt off and held onto the laundry door as the storm blew the back door off of his house. Price said he lives on Vince Drive in Onalaska.

Texas Governor Greg Abbott tweeted about the damage, saying the community would have the state's full support to areas in the path of Wednesday's tornado.

An area power company said about 9,000 people were left without power after several transmission lines were damaged. The company also said the tornado caused extreme damage to power lines in the area and it's unclear how long it will take to make the repairs.

The Polk County Emergency Operations Center has been activated. Shelters at the Onalaska junior and senior high schools are in the process of opening for those needing emergency shelter.

Zachary Botley had just pulled over at a store when he saw the cloud.

"I see the mushroom cloud. It got to forming like a tornado," he said.

Botley said he had just got off work when he pulled over at the store on Highway 59. After recording some video, he headed to his grandmother's house in Seven Oaks.

He said his grandmother, thankfully, was not inside when the twister hit. She's safe, but won't be returning to her home anytime soon.

"We just thank the Lord and pray and take it one day at a time," he said.

Check out photos of the damage below: