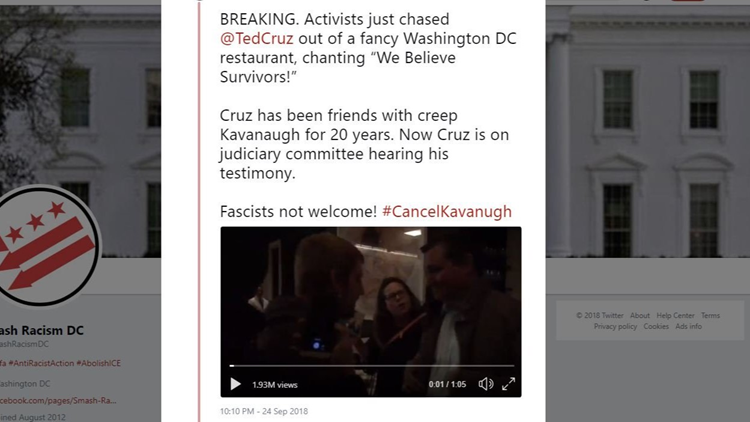 WASHINGTON -- While Ted Cruz was attempting to dine at a D.C. restaurant with his wife and friends Monday night, several activists approached the Texas senator and began chanting, "we believe survivors" in response to his friendship with Supreme Court nominee Brett Kavanaugh who has been accused by two women of sexually assaulting them.

The activists gathered around the table where Cruz was seated and continually chanted until the senator stood up and started gathering his belongings. In a Twitter video, you can see the activists get very close to Cruz as he rapidly tried to make an exit from the dimly lit restaurant.

"Senator, I have a right to know what your position is in Brett Kavanaugh," the survivor yells. Cruz appears to look the woman directly in her face and say, "God bless, you ma'am."

Cruz continues putting on his jacket and gathering his belongings as activists surround the table. As he passed the chanting activists, he told them to "have a delightful evening."

The chanting continued as Cruz and his wife walked down a line filled with activists towards the door. A waiter wearing a white and black tuxedo opened the door and the couple went through the exit. The activists began to cheer.

RELATED: Locals concerned they won't be let into hearing with Brett Kavanaugh's accuser

"Cruz has been friends with creep Kavanaugh for 20 years," reads the now viral tweet from Smash Racisom D.C. "Now Cruz is on judiciary committee hearing his testimony. Fascists not welcome! #CancelKavanugh."

Cruz has been friends with creep Kavanaugh for 20 years. Now Cruz is on judiciary committee hearing his testimony.

Kavanaugh has been accused by Christine Blasey Ford of sexually assaulting her during a party in high school. His college classmate, Deborah Ramirez, also said he exposed himself to her at a party when they were both freshmen at Yale University.

He is scheduled to testify Thursday before the Senate Judiciary Committee. Ford will testify as well. The White House said it is open to hearing testimony from the second accuser, Deborah Ramirez.